Dunstan (d. 988), whose feast is celebrated on 19 May, was a scholar and reformer, but also a craftsman, said to have been a skilled metalworker, painter, embroiderer, musician, and even organ-builder. He was later claimed by goldsmiths, jewellers, and locksmiths as their patron saint.

The British Library collections include several delightful images of Dunstan as a bishop, though his biographers claimed that this was a role he took only reluctantly. 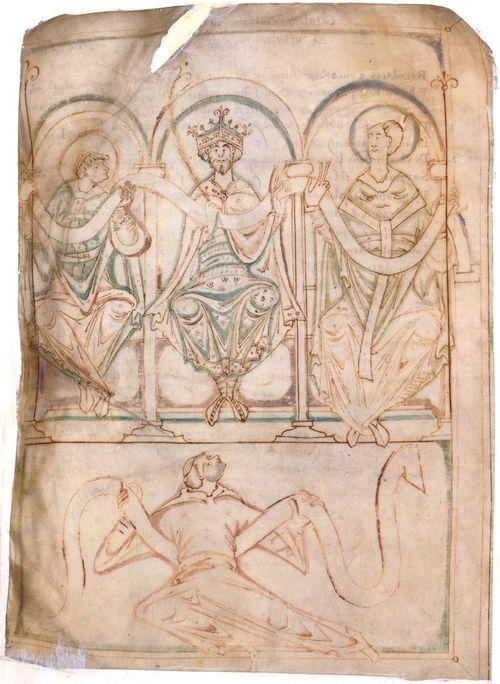 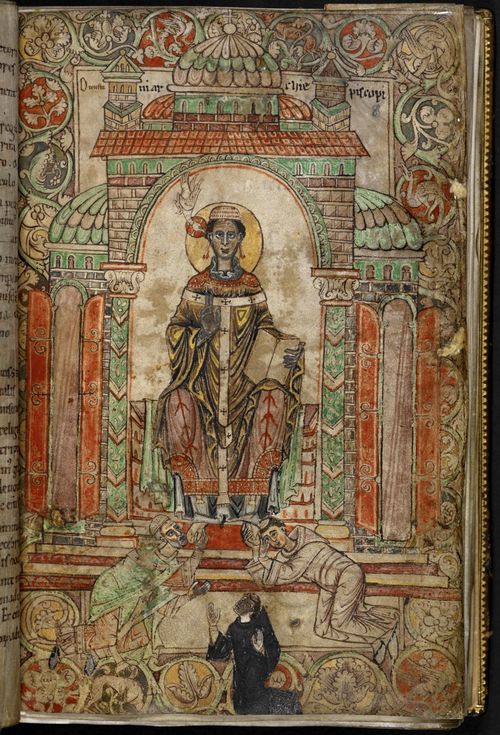 The key source for Dunstan's life is a biography by one of his colleagues, known only by the first letter of his name, B. The British Library has digitized one of the key sources for this work, Cotton MS Cleopatra B. xiii.

Dunstan himself took a keen interest in manuscripts. He is depicted as a scribe in Royal MS 10 A. xiii, f. 2v. The Life of Dunstan in Arundel MS 16, f. 2r, which includes an initial with an image of the scribe, 'Osbearnus', being incensed, might have been a reference to this. His representation as a scribe may have had some basis in reality: the 'St Dunstan's classbook', now Oxford, Bodleian Library, MS Auct. F. 4. 32 (SC 2176), includes on f. 1r an illustration of Christ with a monk at his feet in prayer. In the thirteenth century, an inscription was added at the top of the page declaring it to be the work of Dunstan himself. Whether or not this is true, it is still thought that two lines of verse written above the monk's head are in his hand:

Merciful Christ, I ask you to defend me, Dunstan,
That you may not permit the storms of Taenarus to swallow me.

The reference to Taenarus, the mythical entrance to the underworld, reflects the classical learning of the Anglo-Saxons (he might have picked up the reference from Ovid, Metamorphoses 10.13 or Virgil, Georgics 4.467). Some of Dunstan's own books even survive, notably the Bosworth psalter, Add. MS 37517, and a pontifical (a book containing texts of liturgical rites performed by a bishop), now Paris, Bibliothèque Nationale, MS lat. 943.

Dunstan was equally comfortable in church and court, and his earliest biographers portrayed him in close company with Kings Edmund (920/21–946) and Eadred (d. 955). As a result, he is associated with the so-called ‘Dunstan B’ charters of King Eadred, sometimes thought to have been written by Dunstan himself. 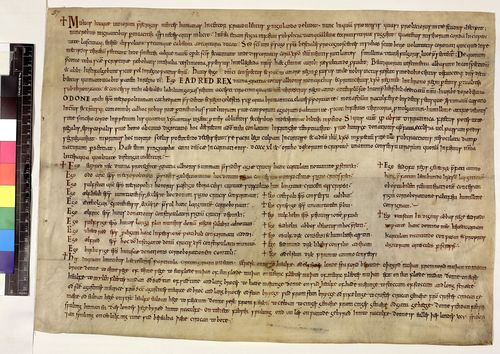 As an artisan, however, Dunstan might have been most satisfied with his portrait in Harley MS 315, f. 15v, where he is cheerfully pinching a demon's nose with a pair of tongs. Harley 315 is on display at the Wellcome Collection until 31 July 2016 as part of its This is a Voice exhibition. 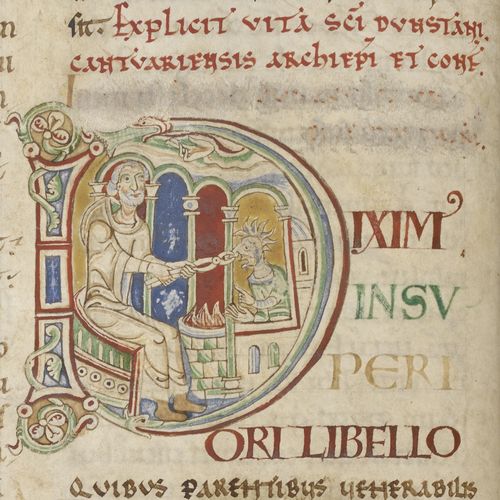 Initial from the Life of Dunstan in the Canterbury Passionale, second quarter of the 12th century, London, British Library, Harley MS 315, f. 15v.