At the start of Thomas More’s Utopia the narrator describes a fictional meeting with a stranger in Antwerp. The man is sunburned, his beard is untrimmed, his cloak hangs carelessly from his shoulder. He appears to be a sea-captain. Later, the narrator is informed that ‘there is no human alive who can give you more information about unknown peoples and lands, and I know you are very eager to hear about them.’ After some description of exotic lands and mythic beasts, the sea-captain – Raphael Hythloday – tells the narrator about a place called ‘Utopia’, a Communist island of religious toleration where a national system of education is open to both men and women. The island’s inhabitants work for only six hours a day and have access to free healthcare. Divorce and euthanasia are legal. The word, ‘Utopia’ means ‘Nowhere land’. 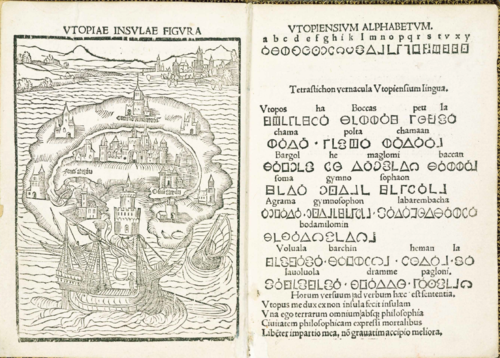 The Frontispiece of the original edition of 'Utopia', showing the fictional, Utopian alphabet. Published in Louvain : Arte Theodorici Martini, 1516 (C.27.b.30.)

More’s Utopia – a radical work of political fiction -- is one of the most influential texts in the Western literary and philosophical tradition. This year marks the 500th anniversary of the work’s publication, in Louvain, in 1516. Its author, Sir Thomas More (1478-1535) was an English lawyer, diplomat, statesman, writer and philosopher, who worked for Henry VIII. Throughout the text, the often humorous dialogue between the narrator and Raphael Hythloday allowed More to voice his anger at the social injustice he saw in English society in the early 16th century. The issues he raised included the problems of political influence and capitalism, the role of surveillance, education, the nature of citizenship, and the relationship between urban and rural spaces. These issues are as topical for us today as they were for More. Utopia has a timeless relevance.

To mark the 500th anniversary we have a new display in the Treasures Gallery which seeks to place the author and his work in their historical context and illustrate the circumstances under which the text was written. The display brings together printed books and manuscripts.

The manuscripts give a sense of More’s intellectual environment and patronage by Henry VIII. Here you can see a beautifully illustrated copy of More’s verses on the king’s coronation. Henry VIII’s  support was vital for More’s career. In 1517, he joined the King’s Council and in 1529 was appointed Lord Chancellor.  But it was his relationship with Henry that would, ultimately, lead to his untimely death. A devout Catholic, More refused to acknowledge Henry as the Supreme Head of the Church of England, after the Reformation, and in 1535 he was executed for treason. 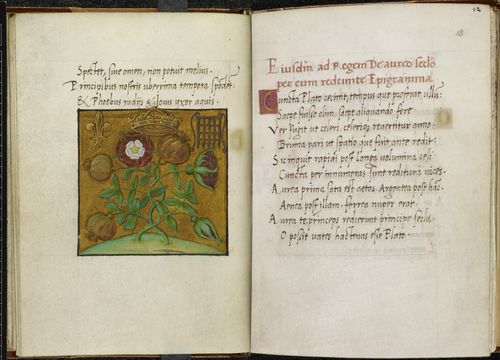 Alongside the selection of manuscripts, you can see a series of printed books which illustrate the text’s popularity and its afterlives. In the period that followed its publication, the Latin text was translated multiple times -- into German in 1524, Italian in 1548, French in 1550, English in 1551, Dutch in 1553, and Spanish in 1637. It was subsequently re-published in different forms and also established a new literary genre, that of the Utopian novel, which soon developed in its own right. Utopia is a work which continues to inspire authors and artists to the present day – many works of modern science fiction use the form of the Utopian novel. The display runs until 18th September.