Manuscript and Print in Renaissance Venice

2015 was the 500th anniversary of the death of the Venetian printer and publisher Aldus Manutius whose publications changed perceptions of printed books and of the book trade in general both for his contemporaries and for future generations.  The anniversary was celebrated all over the world with exhibitions and conferences; a latecomer to these celebrations  – but well worth waiting for – is an exhibition in Venice's main art gallery, the Gallerie dell’Accademia:  Aldo Manuzio. Il Rinascimento di Venezia.  Curated by art historians as well as manuscripts and printed books specialists, it looks at Aldus and his publishing firm from an unusual perspective – in the context of the visual arts in Venice during his career in the city (from the 1490s to 1515).  The exhibition does not merely illustrate Aldus’s career and the circle of associates he built up, with portraits of his patrons and collaborators, but also tries, through the manuscripts and printed books on display, to explore his interest in the visual appearance of his editions, his concern for order, regularity and harmony in typeface and page layout, reflecting the theoretical interests of Renaissance art, in Italy above all, in mathematical relations and proportional ratios. 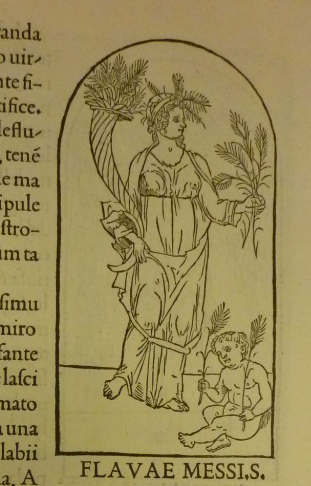 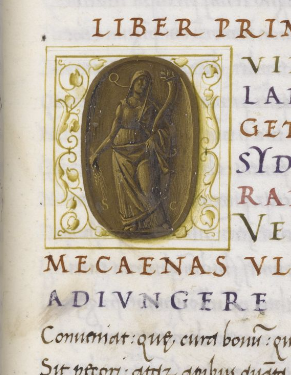 The manuscript tradition was very important for Aldus.  The texts in Greek and Latin which he published  - as well as the vernacular classics such as Petrarch and Dante - were based on intense philological study of their manuscript transmission.  But manuscripts were also a source and a resource for his sense of how a printed book should ideally look.  Both of the innovations he famously introduced in 1501 - the small portable octavo format for editions of the classics (for which he used the Greek term enchiridia, literally ‘hand books’, books small and light enough to be held in one hand) and the italic typeface, with the fluency and elegance of cursive script, used for the texts – were inspired by manuscript production, as Aldus himself tells us in the prefaces he wrote to his editions.

Two of the manuscripts which the British Library has lent to the exhibition reveal connections with Aldus’s most famous – and also most uncharacteristic – publication, the strange Hypnerotomachia Poliphili which he published in 1499 on commission.  The standard English translation of the title is Love’s Strife in a Dream of Poliphilus and the book recounts, in a curious hybrid of Latin and Italian, the adventures of the lover Poliphilus in search of his beloved. His journey is full of classical allusions and motifs – monuments, temples and triumphal arches, statues, urns and obelisks, all decorated with invented inscriptions in Latin and Greek; the book is also copiously illustrated with 172 woodcuts renowned for their artistic quality, although the anonymous artist responsible for the designs has never been definitively identified, the most plausible candidate being the Venetian Benedetto Bordon.   The whole book in fact has remained a mystery – its authorship, its meaning, and, not least, why Aldus took the commission on, given its remoteness from the interests and priorities of his publishing programme.  In contrast with his other editions, the fact that it was published by him is almost hidden away, consisting of a single brief reference in the colophon; despite this reticence, however, he made the book into one of the greatest masterpieces of book design of all time. 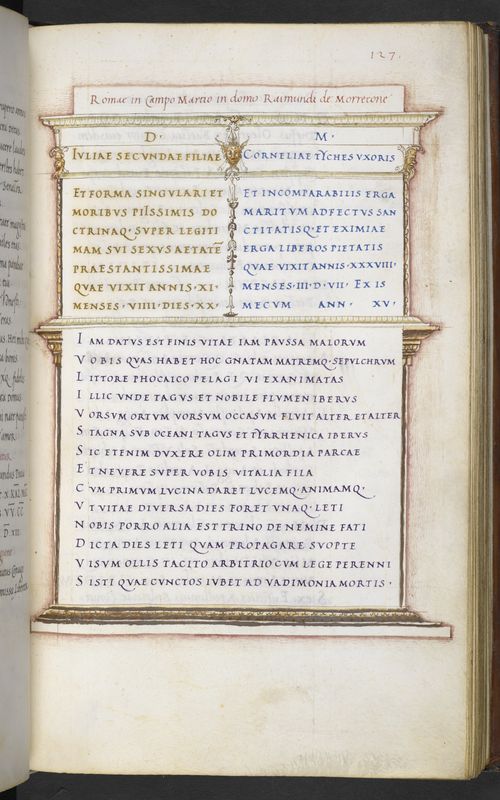 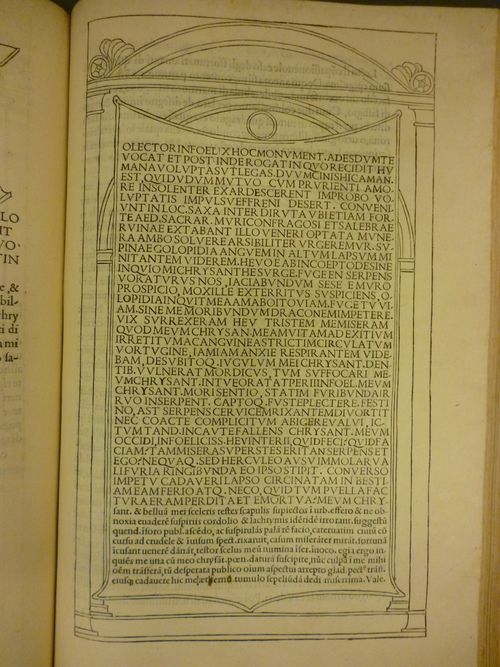 One of the models for the numerous invented classical inscriptions found in the Hypnerotomachia could have been the Veronese architect and antiquarian Giovanni Giocondo’s manuscript collection of actual inscriptions, begun in the 1470s.  There are three versions of the compilation surviving in seventeen manuscripts; the British Library manuscript on display, Stowe 1016, on vellum, is the third and final version, copied by the greatest of all calligraphic scribes in Renaissance Italy, Bartolomeo Sanvito.  There is a possibility that Aldus knew Sanvito, who worked in nearby Padua, and that he was influenced in his choice of typeface design by Sanvito’s scripts, renowned for the elegance of their design and their sense of proportion.  An anthology of authentic classical inscriptions such as Giocondo’s in Sanvito’s presentation must surely have been in Aldus’s mind in designing the page layout of the Hypnerotomachia.

A more direct connection can be found in the second British Library manuscript on show in the exhibition, the works of Virgil, Additional MS 11355, dated 1499-1502, copied by the humanist scholar Giuliano Ceci (with rubric capitals again by Bartolomeo Sanvito).  The image of the Roman goddess of Ceres in the initial letter of the Georgics in this manuscript and the image found in the Hypnerotomachia show that the unidentified illuminator of the manuscript, possibly Benedetto Bordon himself, must have also belonged to the group of artists and engravers working on the Aldine edition. 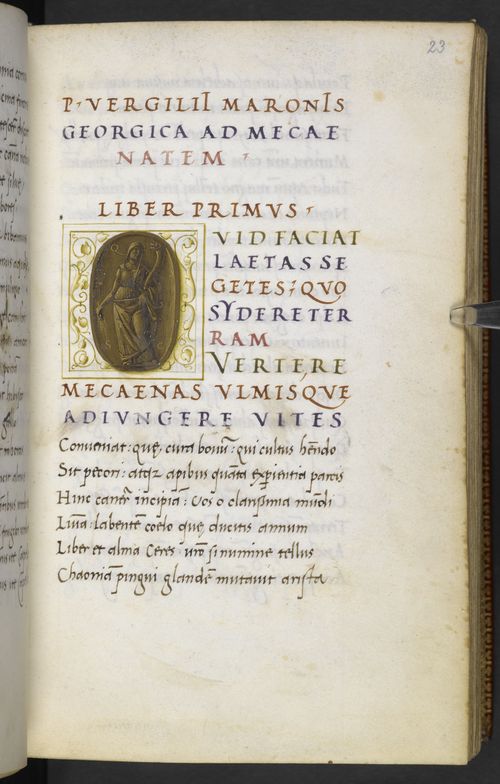 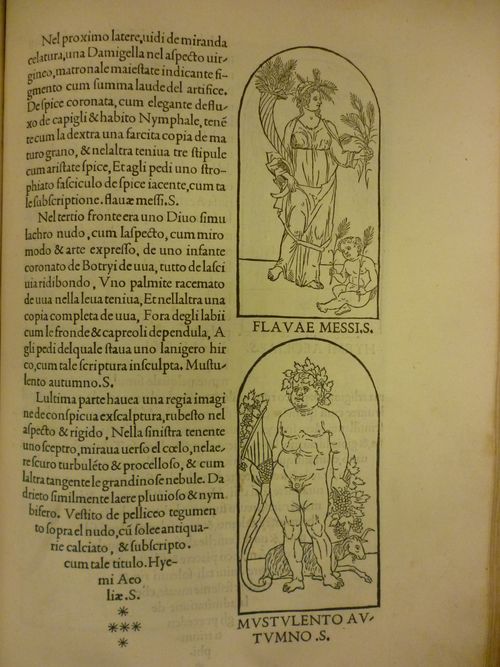 Page with woodcut of Ceres or the goddess of harvest, from Hypnerotomachia Poliphili. Aldi Manutii: Venetiis, 1499 Venice, G.10564, f. m5r

These tantalising glimpses of resemblances and affinities (for more details see the contributions of Laura Nuvoloni and Helene Szépe in the exhibition catalogue, also published in an English version) reveal that Aldus, whose production of illustrated editions over his twenty-year publishing career was extremely limited, did have connections with contemporary Venetian artists and that his concern for the design and arrangement of illustrations in a printed book equalled his interest in the correctness and legibility of texts.

The British Library is delighted to have loaned these precious manuscripts and books to the exhibition Aldo Manuzio. Il Rinascimento di Venezia, open until the end of July 2016.  It is hoped that putting them alongside other works of art, manuscripts and printed books from the period and from collections all over the world will stimulate new research into their  cultural cross-connections and into Aldus’s links to the world of the visual arts in Renaissance Venice.