Some time ago I was alone in the office on a Friday evening and was left in charge of the @BLMedieval Twitter account. This is sometimes dangerous. Among my sillier inventions is the hashtag #WodewoseWednesday, which created a low-velocity Twitter storm as people sent us images of endearing, furry Wildmen (or Wodewoses) from manuscripts across the world. By the end of that day, Twitter had reduced me to near hysterical giggles and I wondered if I might have to lie down under my desk.

It all started quite innocently on the Friday in question, when Johan Oosterman @JohanOosterman posted an image of the British Library’s Egerton MS 1900, f. 100r, with the caption ‘Elephant and Castle’. Here is that image, taken from a late 15th-century German travelogue, which describes a journey from Venice to Egypt. 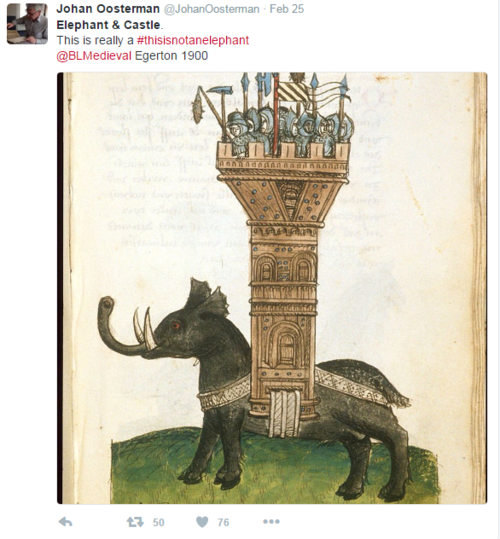 Amused by this tweet, I thought of other names of London Tube stations that could be represented by manuscript images. I retweeted the first suggestion and invited people to #manuscriptthetube. The results showed just how inventively people engage with manuscripts that have been made digitally available. It was also a reminder that medieval London is not far from the surface and you do not need to dig deep, not even as deep as a Tube platform, to find its traces. Here, in the most modern of media – digital images representing a modern transport network – was a reminder of the city’s past, of its rich lexicon of medieval place names and the imagination of its inhabitants and an online community further afield. 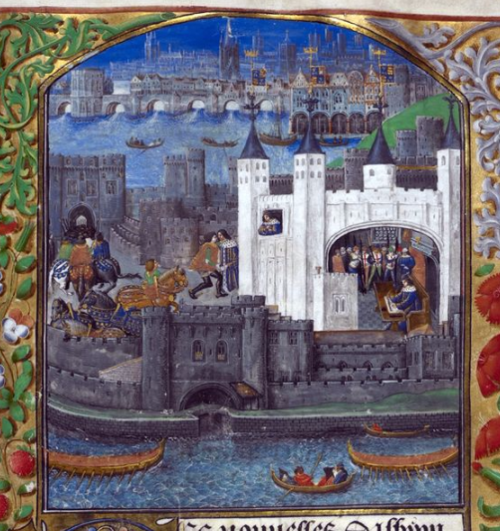 A 21st-century view of the Tower of London, photographed by Ralf Roletschek, England (London), 13 October 2010.

Like many Londoners, I have a great affection for the iconic London Tube map. It’s a masterpiece of design. The map was designed by Henry Beck (1902-1974) in 1932. His innovation was to take some liberties with geography and thereby make the stations appear evenly spaced, ordered and legible. In its broad palette and dovetailing lines it’s a visual representation of all of London’s colour and variety. In many ways, Beck's map is similar to a manuscript like Egerton MS 1900, itself a colourfully illustrated travelogue with some distortions of distance.

Below is a run-down of some of our favourite tweets which #manuscriptthetube. Please continue to send us your suggestions via @BLMedieval. We've embedded the links to all the original tweets in everyone's Twitter handles.

A Run-Down of Our Favourites

Some suggestions gestured to the medieval history embedded in London's place names, like this one from Buckland Abbey @BucklandAbbeyNT, for Blackfriars. Blackfriars is named after a community of Dominican monks or ‘black friars’, so called because of the black habit they wore. It was established in 1221 near Lincoln’s Inn. The image here is from @thegetty's MS 107, f. 224r 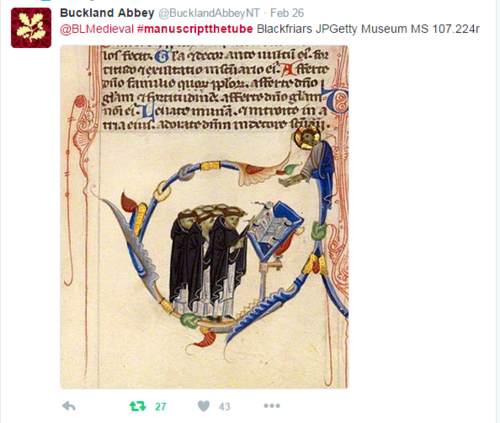 Some punned on the names of Tube stations, like Acton Town from Susannah Davis @aethelflaed with an image from the Bodleian Library @bodleianlibs MS Auct F 2 13 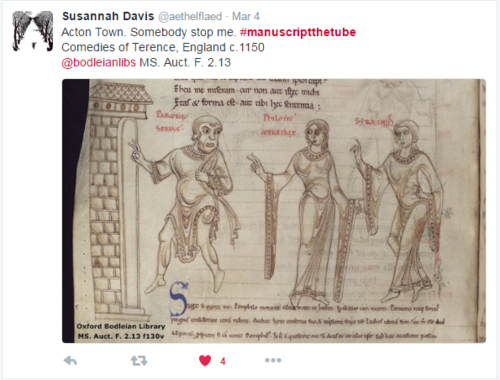 Harrow on the Hill  station proved to be a rich source of inspiration for Adam @pseudomonas, with an image from our 'Taymouth Hours', ?London, c. 1325-50, Yates Thompson MS 13, f. 68v 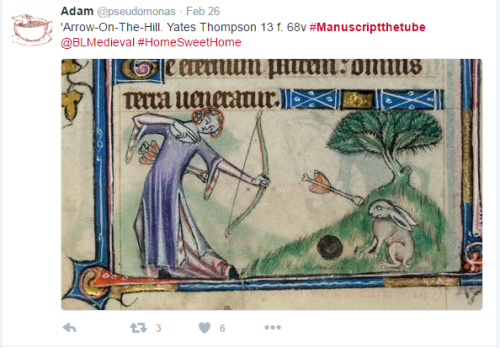 Harrow on the Hill got a second outing in my personal favourite of the punning suggestions from @SLevelt, Sjoerd Levelt, with an image from our Speculum humanae salvationis, England, c.1485-1509, Harley MS 2838, f. 33v 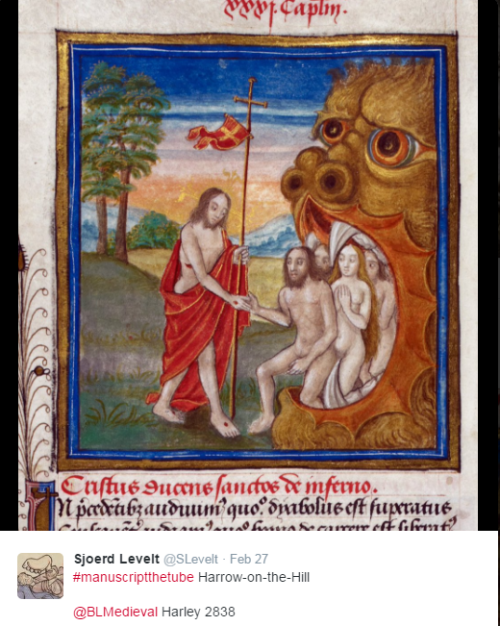 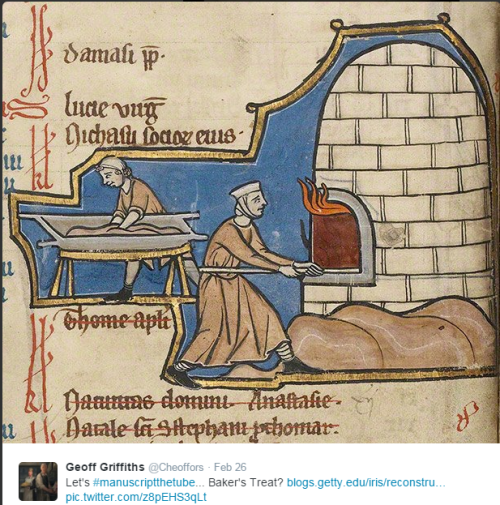 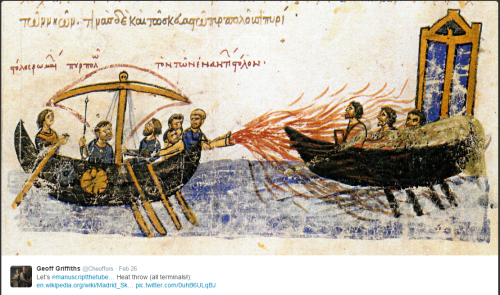 Richard Fitch @tudorcook was in playful mood with an image of Arsenal from @MorganLibrary's late 14th-century copy of Jacques de Longuyon's Vows of the Peacock, in MS G 24, f. 25v 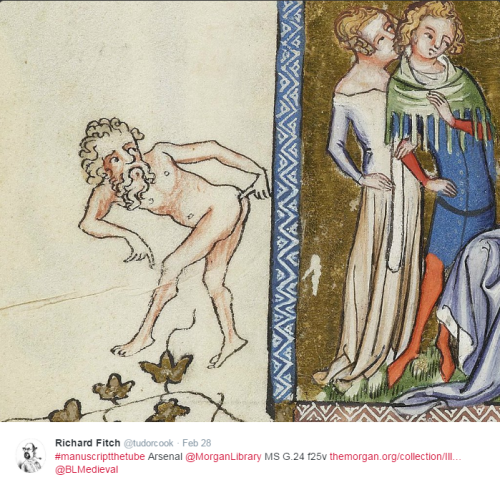 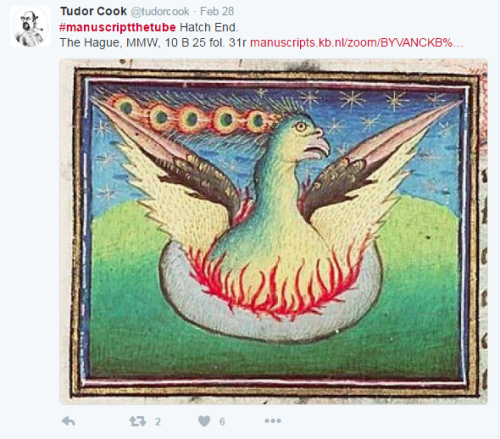 Commonplace Berk @stambuch was typically witty in his suggestion for Kilburn from the Bodleian Library's Douce MS 332. You can see his other suggestion here (caution advised). 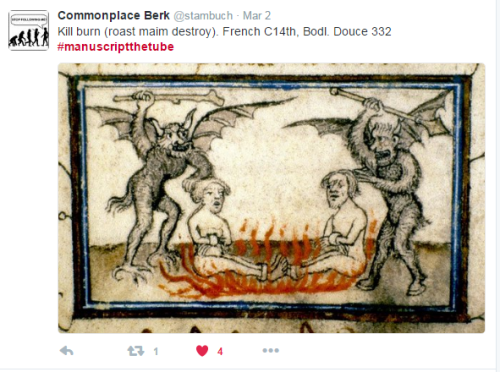 Others were more literal representations of the names of tube stations, like London Bridge (Mind the gap!) from @DollyJorgensen with an image from our Yates Thompson MS 47, a copy of John Lydgate's Life of Saint Edmund, made in ?Bury St Edmunds, c. 1461-75. 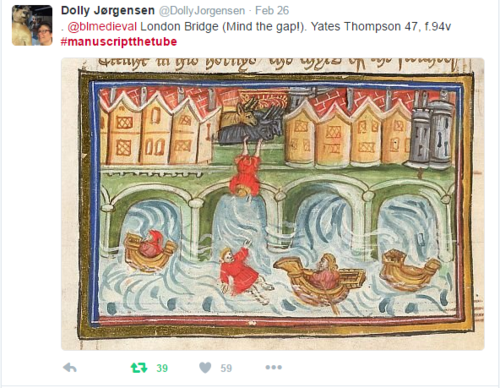 We are thrilled that the Getty Museum @thegetty took up our British challenge and suggested Seven Sisters from an image of Philosophy presenting the seven liberal arts to Boethius by the Coëtivy Master. 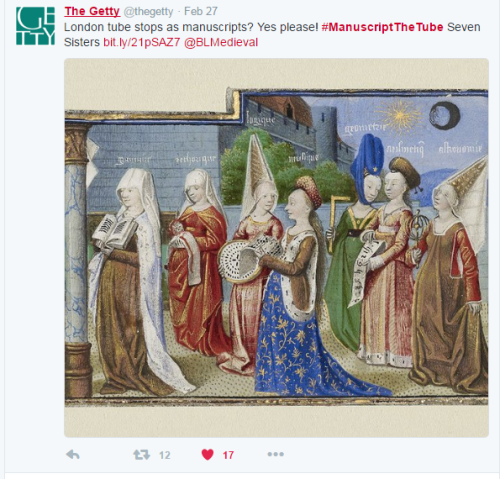 Geoff Griffiths @Cheoffors also used this image for High Barnet. For our non-British readers, 'barnet' is cockney rhyming slang for 'hair' (it comes from 'Barnet fair') and also means 'head'. 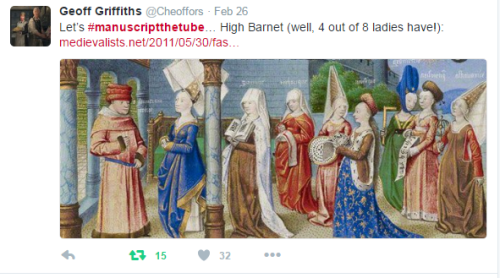 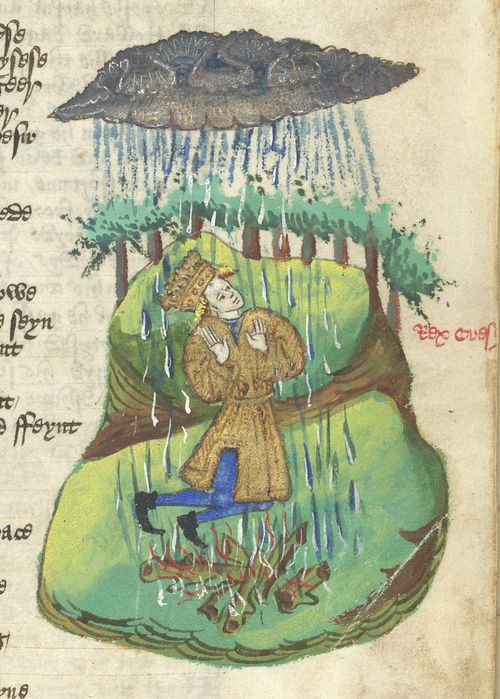 And there was a bleak and brilliant humour to her suggestion for Amersham from Add MS 18851, the Breviary of Queen Isabella of Castile, made in Bruges in c. 1497. 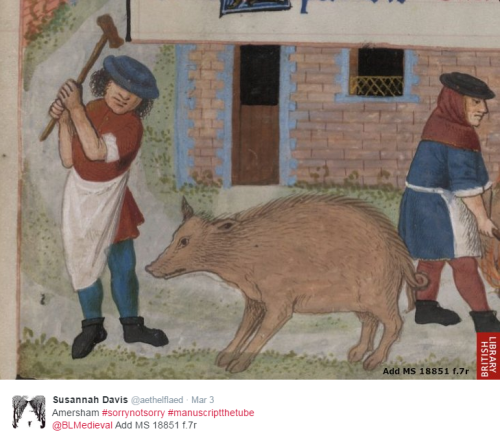 Elephant and Castle  got a second outing from @SophieVHarwood with a detail of the death of Codrus, from Speculum humanae salvationis, England (London), c. 1485-1509, Harley MS 2838 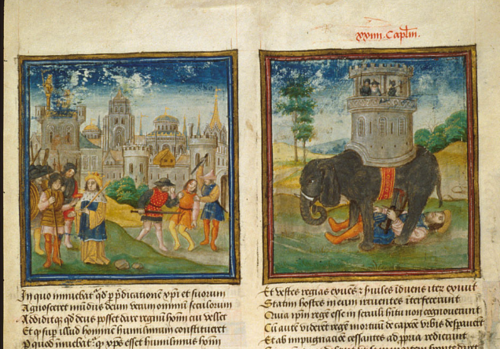 C R Stillman-Lowe @SICathy sent us this lovely angel for, um, Angel from the 'Taymouth Hours', our Yates Thompson MS 13 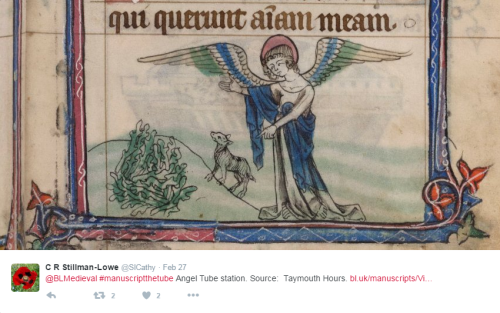 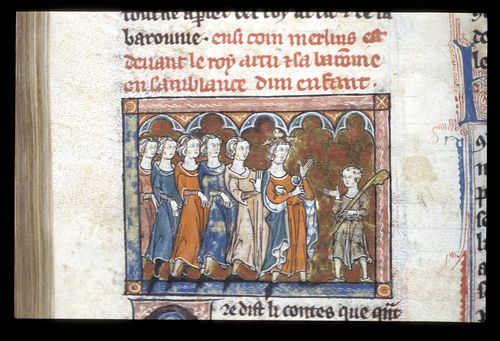 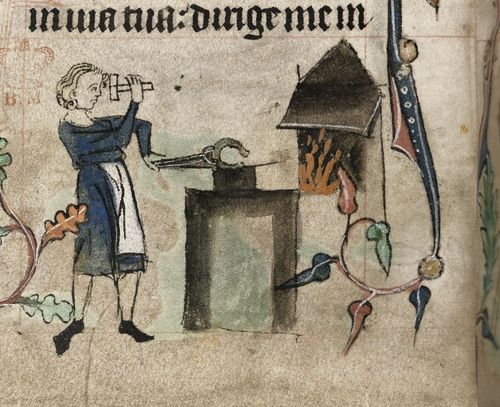 I loved some of the madder ones. Like this suggestion of Oval from Anthony Bale @RealMandeville. Yep, it's a wound. 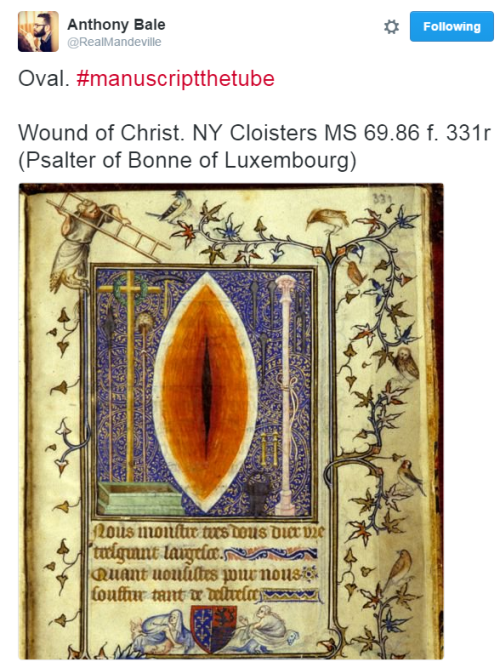 Our very own @julianpharrison gave us Fulham Broadway (or possibly Tott[ering]ham Court Road?). No we didn't get it either, but we thought we should put it up in any case to keep him happy. And it does depict a pig on stilts, from Jean Froissart's Chroniques (the 'Harley Froissart'), Low Countries (Bruges), c. 1470-1472, Harley MS 4379, f. 19v 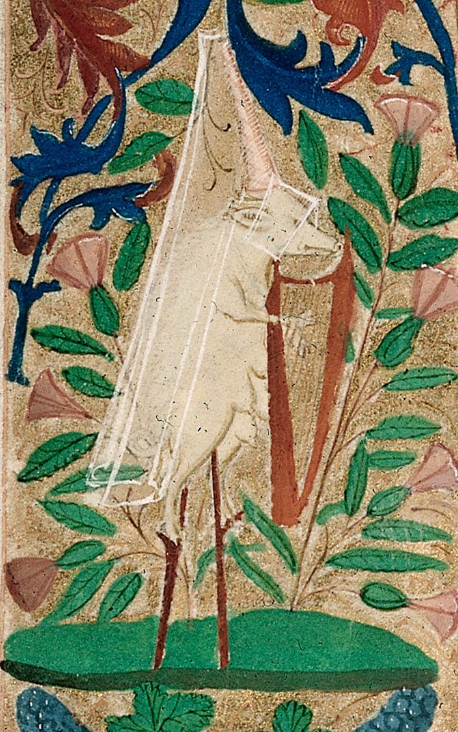 Finally, Erik Kwakkel @erik_kwakkel gave us a very witty suggestion which gestured to the history of our collection. He suggested Burnt Oak, with an image of some of the charred fragments of manuscripts destroyed in the Cotton Fire. You can read about the terrible fire which destroyed part of the library's Cotton collection here. 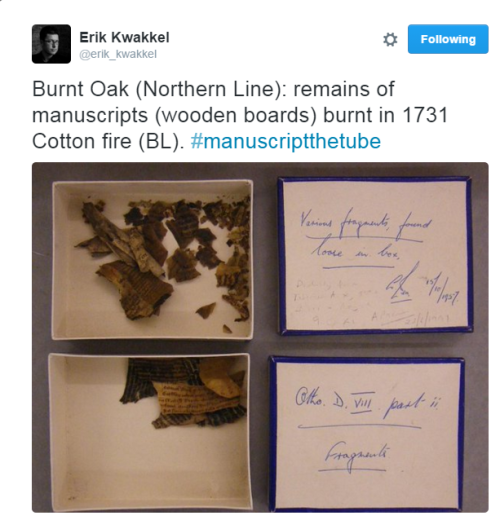 Which are your favourite entries from #manuscriptthetube? We'd love to hear your suggestions: please tweet us @BLMedieval or leave a comment below this blogpost.

Susan Reed @sureed67 reminded us that Saint Pancras was 'Beheaded by the Emperor. So you could say the King was Cross with St Pancras'. Find out more about who this king, or rather emperor, was and why he was cross with St Pancras,  by checking out our St Pancras' Day blog post). 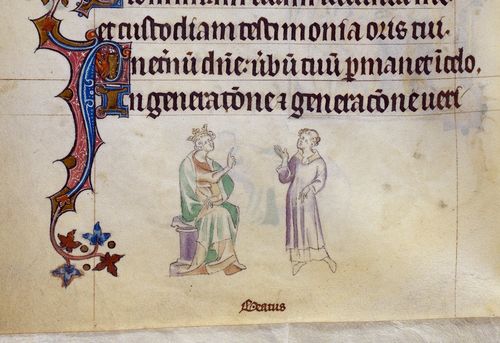