Off With His Head

As a manuscript curator, one often gets asked, what can we achieve by studying old handwriting? Surely every important document in the British Library's collections has already been published. Surely every manuscript has yielded every clue as to why it was written, and who may have consulted it.

Sometimes when we do explain what our job entails, people still raise a quizzical eyebrow. Old handwriting is hard to read, isn't it? Am I a graphologist (or whatever it is you call them)? Is it ever possible to gain psychological insight into the people who wrote our documents? 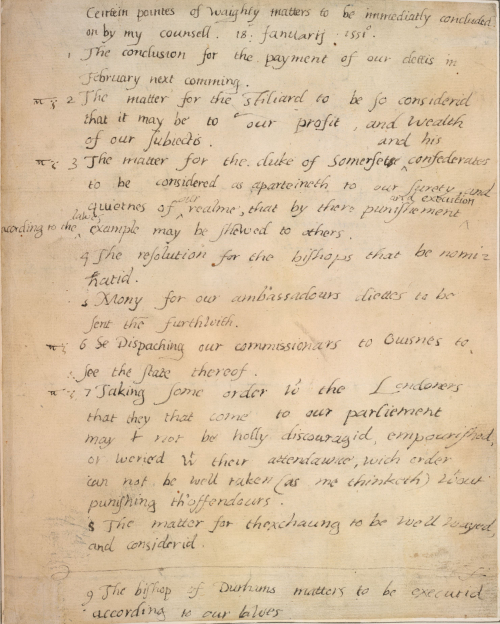 Certein pointes of weighty matters to be immediately concluded on by my counsell. 18 Januarii 1551 (Cotton MS Vespasian F XIII, f. 273)

The text I am highlighting here goes some way to answering some of those questions. I came across it when I was cataloguing the Cotton manuscripts, one of the foundation collections of the British Museum (and hence the British Library), and home to some of our finest literary and historical treasures: Magna Carta, Beowulf and the Lindisfarne Gospels, to name just three. The document in question is bound with other state papers, and I recognised the handwriting immediately: it is in the distinctive hand of the boy-king, Edward VI of England (reigned 1547–53), the son of Henry VIII. The title, written at the top in Edward's schoolboy hand, explains its purpose: 'Certain points of weighty matters to be immediately concluded on by my council'. The date given is 18 January 1551, that is, January 1552 according to the modern calendar.

What we have here is a memorandum for the meeting of the king's council. I guess it's not dissimilar to the agenda that would have been produced for the first Cabinet meeting of Britain's new Prime Minister, except that some of its items — one of them, in particular — are perhaps slightly more bloodthirsty than we are usually used to. In fact, many of the nine items listed by King Edward for discussion have a certain modern resonance. They deal, for example, with the national debt ('The conclusion for the payment of our debts in February next coming') and foreign trade ('The matter for the steel yard to be so considered that it may be to our profit, and wealth of our subjects.')

Below is a full transcription of this memorandum. It is the third item on the list that really made me raise my own eyebrows. It reads, in modern English:

'The matter for the duke of Somerset and his confederates to be considered as appertaineth to our surety and quietness of our realm, that by their punishment and execution according to the laws, example may be showed to others.'

Now, Somerset's fate remains highly controversial. Edward Seymour, duke of Somerset, was the brother of King Edward's mother, Queen Jane Seymour (the 3rd wife of Henry VIII), and he had been the lord protector at the start of Edward's reign. He fell from grace after rebellions had taken place against his governance of the kingdom, and he was stripped of the protectorship in January 1550. Then, in 1551 Somerset was accused of plotting against the life of the duke of Northumberland; he was arrested on a charge of committing high treason on 16 October 1551, shortly after dining with the king.

Somerset's trial took place on 1 December, at which he argued skilfully against the charges laid against him. He was acquitted of high treason, but convicted of bringing together men for a riot. It was widely expected that Somerset's life would be spared, but on 19 January 1552 (the day after Edward wrote his memorandum), the king and council decided to proceed with the execution. Edward Seymour was taken to Tower Hill on the morning of 22 January and beheaded. Certain of his fellow conspirators were executed on 26 February, but others survived with their lives. 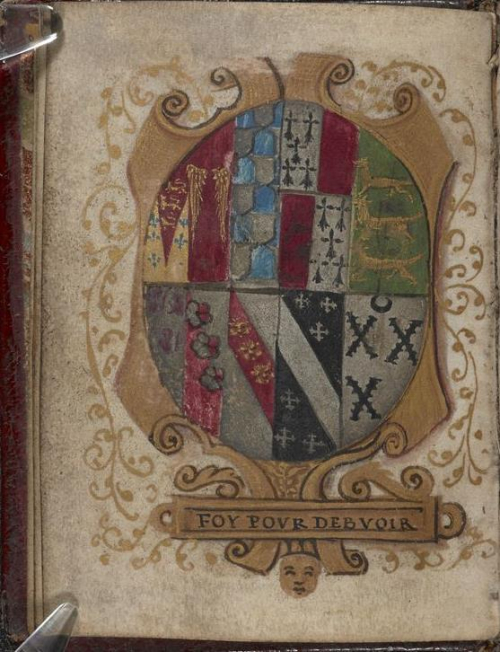 A prayer book that once belonged to the duke of Somerset (Add MS 88991), featured in a previous blogpost

The eagle-eyed among you may have realised that, as originally written, King Edward's memorandum did not deal directly with Somerset. As first written, the third item read, 'The matter for the duke of Somerset's confederates to be considered as appertaineth to our surety and quietness of our realm, that by their punishment example may be showed to others.' Edward VI made three substantial changes to this passage. First, he changed the subject from the duke of Somerset's confederates alone to the duke of Somerset AND his confederates; next, he commanded that they be punished AND executed; and thirdly, lending his statement a little gravitas, he ordered that this be carried out according to the laws.

This brings us back to the handwriting of the document under scrutiny. Did Edward change his mind while he was drafting the agenda for his council? Was he really determined to proceed with the execution of his uncle, or was there somebody standing at his shoulder, persuading him to act 'according to the laws'? It's slightly unnerving to think that a 14-year-old boy wielded absolute power in England at this time, and at the royal whim one of his own relatives could be sent to the scaffold. You may sniff, of course, but this is just one of the ways that reading an original manuscript can transform our understanding of the past.

Certein pointes of weighty matters to be immediately concluded on by my counsell. 18 Januarii 1551.

I am staggered at how legible