Robert of Cricklade: Why I Write

The problem of whether to write something new or dig something up from the past is perennial. As Ecclesiastes puts it, ‘There is no end to the writing of books, and much study is wearisome.’ This was especially a problem for medieval writers, from whom we have inherited a concern for demonstrating the authorities supporting our assertions. Some intellectuals in the Middle Ages wondered whether there was any purpose in writing at all, given the wealth of books already available.

Robert of Cricklade thought otherwise. Born in Wiltshire, he was first a teacher, later becoming an Augustinian canon (halfway between a monk and a secular priest) at nearby Cirencester Abbey. Around 1138/9, he was put in charge of St Frideswide’s Priory in Oxford, much of which still stands today as part of Christ Church. One of five copies of his unpublished book On the Marriage of Jacob (De connubio Iacob) is in the British Library. 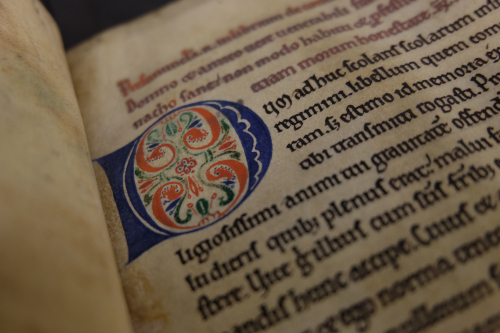 Robert was an indefatigable supporter of contemporary writers. He asserts that if others think he should stop writing, perhaps they were merely jealous. He offers a challenge: Do you want me to pay attention to you? Then give me something to read (Royal MS 8 E II, f. 49r–v):

Let them call to mind that it is written, ‘jealousy slays the simple’ [Job 5:2], those namely who in being jealous prove that they are lesser than those of whom they are jealous. If they grieve that I write, let them also write, and I will certainly read their writings, as it is said, ‘with a bowed head’ [Horace, Saturae 3.80], as theirs; I read now those who write now, not being jealous and disparaging, but giving thanks that thus far ‘the Lord’ has not, as the prophet says, ‘forsaken the land’ [Ezekiel 8:12, 9:9], since even in our age people may be found who can stir us up to love of his sayings and writings.

For I also read the writings of the venerable abbot of Clairvaux that came into our hands; and I not only read the splendid work of the man of highest erudition, William, monk and cantor of the church of Malmesbury, that he compiled on the Lamentations of Jeremiah, but I also had it written, so that it might be found in our church. I read also his book on the miracles of the most blessed mother of God and perpetual virgin, Mary, which is also found in our church. What shall I say on his compilations from the works of the most blessed Pope Gregory, in which the violent uprooter of sins and loving builder of virtues appears so that in him in a certain way it seems to be fulfilled which is written, ‘See, I have set you over nations and over kingdoms, to pluck up and to break down, to build and to plant.’ [Jeremiah 1:10] I have not yet read his other works, but I will read them if it should please God and the space of my life is extended. For I am not jealous of writing monks, but I rejoice with them, although I am not a monk, but the most unworthy of the canons of Cirencester of the church of St Mary, the mother of God, under the discipline of the holy and venerable Serlo, the first abbot of the place, praying to God for the remission of their sins.

Robert’s approach was not mere words; although his copies of William of Malmesbury do not survive, some of the other remaining books from Malmesbury and Cirencester show evidence of exchanges between the two locations, only 20 km apart. In Oxford, he wrote a life of St Frideswide that showed the priory’s patron saint as a precocious learner (and far more intelligent than a typical male child). Even after Robert’s death (between 1174 and 1180), his work at Oxford and Cirencester inspired the work of the famous Alexander Neckam (1157–1217).

Robert’s advice holds true for any of us today suffering from writer’s block. Bragging that your talent exceeds even that of J.R.R. Tolkien won’t achieve anything. ‘Nunc lego qui nunc scribunt’ – ‘I read now those who write now’.