The Execution of Sir Thomas More

2016 marks the 500th anniversary of the publication of one of the most influential early modern books, Thomas More's Utopia. We currently have a Utopia display in our Treasures Gallery, and this Friday, 8 July, historian John Guy will be talking about Thomas More and Utopia at the British Library. Today is also the anniversary of the execution of Sir Thomas More on 6 July 1535, the subject of this blogpost. 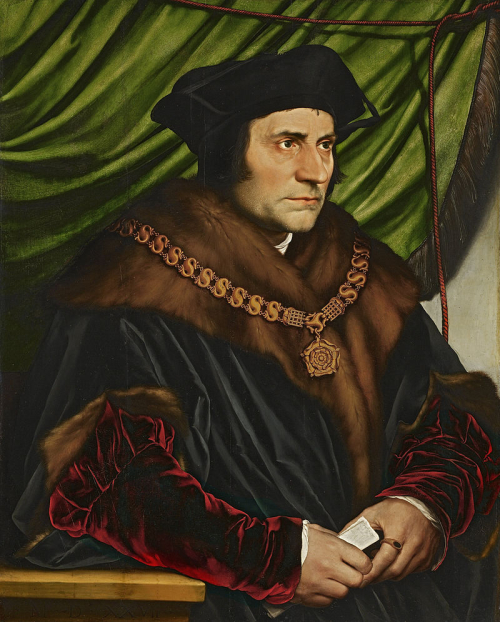 Sir Thomas More, English lawyer, diplomat, statesman and internationally renowned humanist scholar, entered royal service in 1517 and was appointed Lord Chancellor of the Realm in 1529, following the fall of Cardinal Wolsey. More, who first met Henry VIII in 1499 when he accompanied Erasmus, the Dutch humanist scholar, on a visit to Eltham Palace to meet the 9-year-old prince, became a close friend and confidant of the adult king. The two men shared a passion for astrology and according to contemporary accounts enjoyed gazing at the stars together after supper and discussing theology, which was another of their shared interests. As a devout Catholic and loyal servant of the Pope, More used his growing influence in the 1520s to defend Catholic orthodoxy against the Lutheran movement, writing polemics against heresy, banning Protestant books and, as Lord Chancellor, prosecuting heretics.

More had opposed Henry VIII’s quest to end his marriage to Katherine of Aragon and marry Anne Boleyn, but he nevertheless accepted the position of Lord Chancellor, trusting Henry’s promise to keep him out of such matters. By 1532, he was growing increasingly distressed over Henry’s repudiation of papal jurisdiction in England and the King’s increasing power over the Church. The final straw came on 15 May 1532 when the clergy submitted to Henry’s demand that they accept that all ecclesiastical law required royal assent. No longer able to serve the King and obey his own conscience, More resigned as Lord Chancellor the very next day and retired from public life to his family home in Chelsea. To avoid further trouble, More remained silent on the subject of the King’s marital problems, but his refusal to attend the coronation of Anne Boleyn in June 1533, followed by the publication of The Apology of Sir Thomas More, in which he urged ‘good catholic folk’ to defend the old faith, incurred the wrath of Henry and Anne.

The moment that More and his family had long feared came on 12 April 1534 in the form of a summons to appear at Lambeth Palace to swear the Oath of Succession, which recognised Henry VIII and Anne Boleyn’s children as legitimate successors to the Crown and declared Princess Mary to be illegitimate. The next day, More stood before the King’s commissioners, including Cromwell and Cranmer, and declared that although he was willing to accept Henry’s new wife and the succession he refused to swear the oath, the preamble to which also renounced papal power and affirmed the Royal Supremacy. More was arrested for his act of disloyalty to the King and imprisoned in the Tower along with John Fisher, Bishop of Rochester and active supporter of Katherine of Aragon, who had also refused to swear the Oath of Succession. 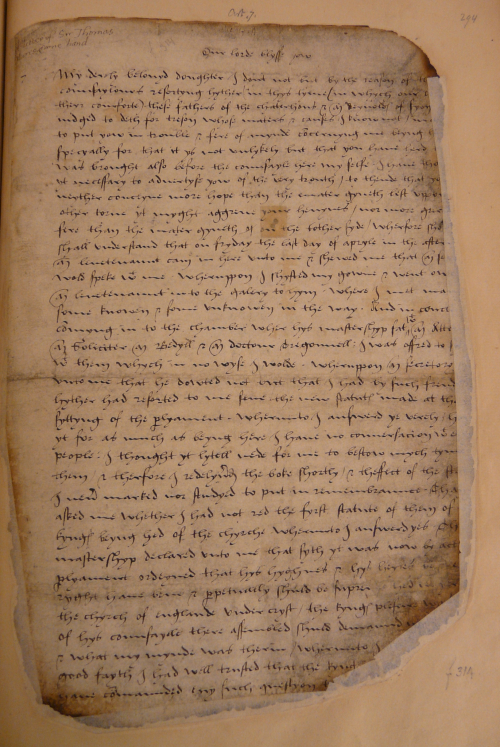 Letter from Sir Thomas More to Margaret Roper from the Tower, reporting on his interrogation before members of the King’s Council, on Friday 30 April. Tower of London, 2-3 May 1535 (London, British Library, Arundel MS 152, f. 294r)

In November 1534, the Act of Treasons made ‘malicious’ denial of the royal supremacy punishable by death. More was interrogated on four different occasions in the Tower but held firm to his principles and steadfastly refused to acknowledge Henry’s Supremacy which would require him to deny his ultimate allegiance to the papacy. In the dignified letter illustrated above, written to his daughter, Margaret Roper, More provides a detailed account of his interrogation on 30 April 1535 before Thomas Cromwell, who demanded on the King’s behalf to know More’s opinion on the Supremacy. More responded that his life was now reserved for ‘study upon the passion of Christ’ and his own ‘passage out of this world’ and he refused to ‘meddle with any matter of this world’. As if sensing that his words would be preserved for posterity, More defiantly declared on the final page, ‘I am, quoth I, the King’s true faithful subject and daily bedesman and pray for his highness and all his and all the realm. I do nobody harm, I say none harm, I think none harm but wish everybody good. And if this be not enough to keep a man alive in good faith I long not to live’. It certainly wasn’t enough for Henry, who demanded More’s full submission; anything less was unacceptable.

On 1 July 1535, Thomas More stood trial for treason, and he was condemned to death for ‘maliciously denying the royal Supremacy’. Five days later, while Henry hunted at Reading, More was beheaded on Tower Hill, proclaiming himself ‘the King’s good servant but God’s first’.

Visions of Utopia is a free display at the British Library, open until 18 September, featuring an original edition of Utopia and books and documents associated with Thomas More. John Guy's lecture, Thomas More and Utopia (8 July), will examine the contents of this famous book, why it was written and its intended audience.