The Translation of Thomas Becket

Today we celebrate the Feast of the Translation of Thomas Becket. On this day in 1220 the relics of this famous English martyr were ‘translated’ or moved from the crypt of Canterbury Cathedral to an elaborate shrine in the newly-constructed apse at the east end of the cathedral. In the words of Kay Slocum (Liturgies in Honour of Thomas Becket, Toronto, 2004), this was ‘one of the most important and sumptuous state occasions of the 13th century’. King Henry III of England was in attendance, together with the political and religious great and good, and a new liturgical office was composed for the occasion. Unfortunately, the shrine was destroyed in 1538 by order of King Henry VIII, but the legend and the liturgy survive.

Two manuscripts in the British Library's collections contain versions of the Office for the Translation. One of these, the ‘Stowe Breviary’ (also known as the ‘Norwich Breviary’, Stowe MS 12), can be viewed in full on our Digitised Manuscripts site. This manuscript was made in the diocese of Norwich within a few years of the translation of Becket’s relics, and it is illuminated in the East Anglian style perfected in the Gorleston Psalter. 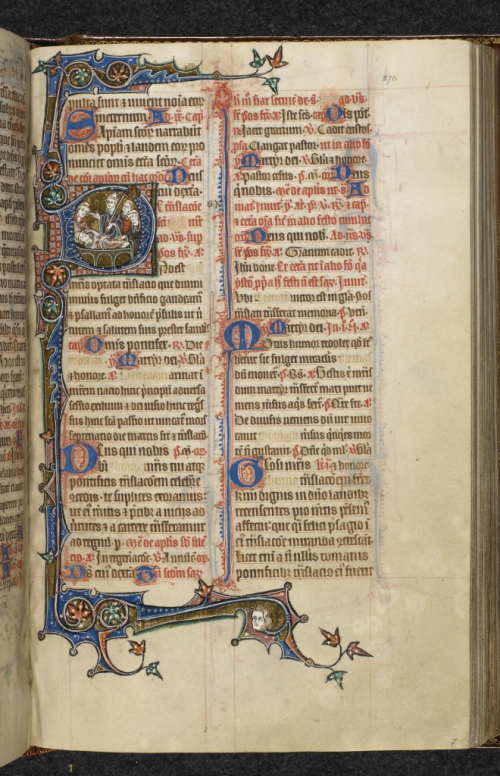 Historiated initial depicting the translation of Thomas of Canterbury, with the name ‘Thomas’ erased in the rubric on the right of the initial: 1322-1325, the ‘Stowe Breviary’, Stowe MS 12, f. 270r

Thomas Becket, appointed Archbishop of Canterbury in 1162, was murdered in the cathedral on 29 December 1170 by three knights, widely believed to have been acting on the orders of King Henry II. Henry had been incensed by Becket’s refusal to recognise the power of the English monarch over the Church. The story of Becket’s martyrdom spread rapidly through Europe and it was widely represented in medieval art. One of the most famous series of images is that found in the Queen Mary Psalter, one of which is shown here (they can all be seen on Digitised Manuscripts). 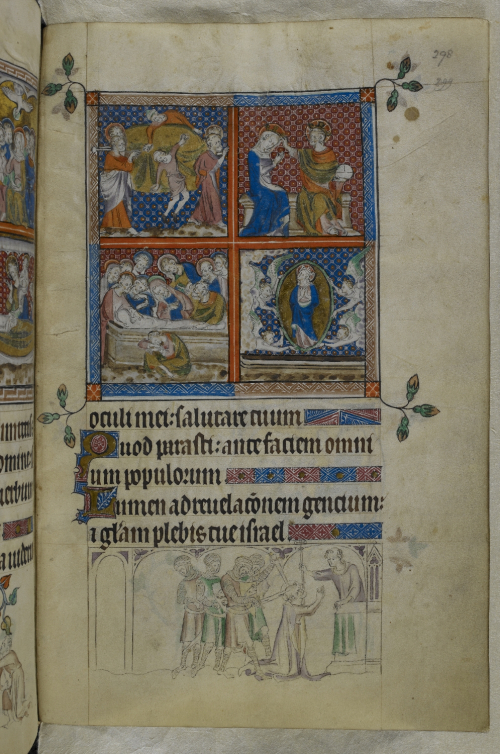 A bas-de-page image illustrating the murder of Thomas Becket, from the Queen Mary Psalter: England (London/Westminster or East Anglia?) between 1310 and 1320, Royal MS 2 B VII, f. 298r

Three years after his death, Becket was canonised by the Pope, and his cult became one of the most widely celebrated in the Middle Ages. Liturgies were composed for his feast day, 29 December, with lessons recounting his life and legend and chants celebrating his miracles. In the Huth Psalter from northern England, St Thomas is portrayed alongside the very popular St Margaret and St Catherine of Alexandria. 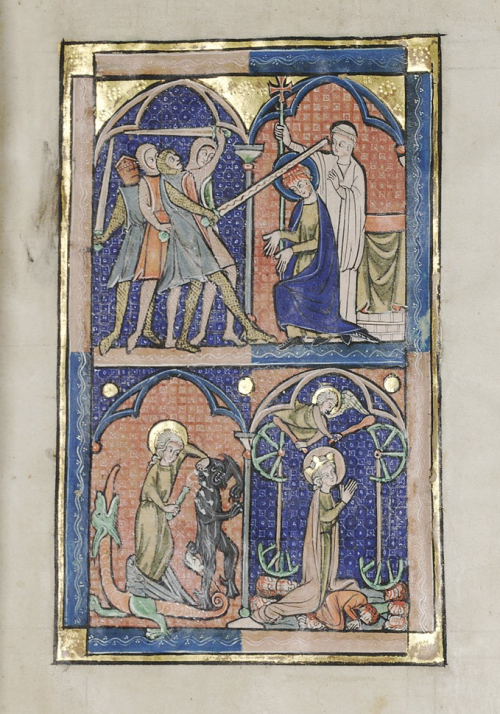 Thomas Becket is murdered by a group of knights; Margaret emerges from the belly of a dragon, and beats a demon with a flail; Catherine of Alexandria prays amidst the dead bodies of the men who attempted to martyr her by breaking her over a wheel. An angel breaks the wheels with clubs: England (Lincoln or York?), 4th quarter of the 13th century, Add MS 38116, f. 13r

The Penwortham Breviary (Add MS 52359), a beautifully decorated manuscript from northern England, contains a series of liturgies for Thomas Becket with musical notation. 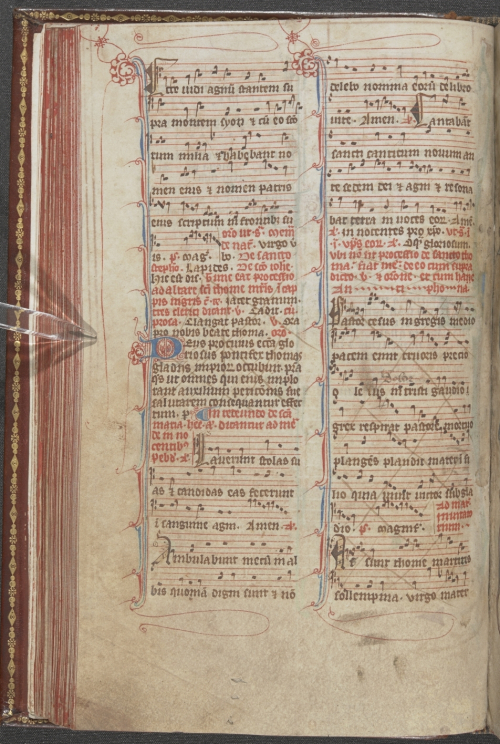 By the early 13th century crowds of pilgrims from across Europe visited Becket’s tomb at Canterbury Cathedral, returning home with tales of miraculous events. Following an earlier papal decree, his relics were to be moved to a magnificent new shrine and the Archbishop at the time, Stephen Langton, planned the occasion meticulously, choosing an auspicious date, rather than exactly 50 years to the day from Becket’s death. Tuesday, 7 July 1220, was ‘according to the details given in Leviticus … on the tenth day … of the seventh month after seven-times-seven years from the event; and for good measure, the day was Tuesday, corresponding with the special Tuesdays in Becket’s life, the date was the anniversary of Henry II’s inhumation in 1189, and 1220 was a leap-year, a time of good fortune’ (Ann Duggan, ‘The Cult of St Thomas Becket in the Thirteenth Century’, in St Thomas Cantilupe, Bishop of Hereford: Essays in His Honour, ed. by Meryl Jancey, Hereford, 1982, pp. 38-39). Unfortunately the shrine was destroyed in 1538 by order of King Henry VIII, but a candle in Canterbury Cathedral marks the spot.

The Office for the Translation of Thomas Becket is included in a number of surviving breviaries, and it continued to be celebrated every 50 years from 1220 to 1470, an unprecedented honour for an English saint. A second copy in the British Library's collections is found in Additional MS 28598, a late 13th-century breviary from Ely, with the same antiphons and responsories as Stowe MS 12, but with musical notation. A unique prosa (a set of rhymed couplets set to music added to a responsory on special occasions) follows Lesson 9, which tells how the martyr resuscitated a young girl for the second time. 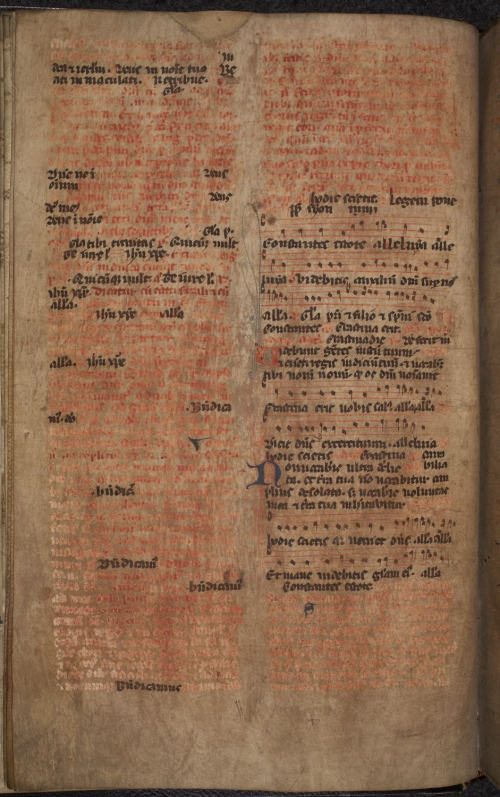 You can read more about Thomas Becket in our blogpost Murder in the Cathedral.