Followers of our Twitter account may remember an image we posted a few months ago on #InternationalHugAMedievalistDay, showing a woman being interrupted from her reading by a man trying to embrace her. It turns out that the story behind the image involves ancient Greece, Renaissance Italy, female intellectuals, Epicureans, misogyny and, possibly, prostitution.

The woman depicted in this image is Leontion (fl. 300 BC), a female Epicurean philosopher from Ancient Greece. Leontion’s own writings have now been lost. A fragment of a letter addressed to her from her mentor Epicurus (341-270 BC) survives to suggest her learning and her importance in the Epicurean school of philosophy. Apart from that, little is known of her. She may have been the companion of another Epicurean philosopher, Metrodorus. Later sources claimed she was a hetaerae, or courtesan, although there is no way now to verify this claim. Nevertheless, although few sources about Leontion survive, she remained famous for centuries after her death for criticising a rival philosopher, Theophrastus (d. c. 287 BC), who was Aristotle's successor as teacher at the Lyceum.

Some later writers were aghast at this incident. In De natura deorum, Cicero (106 BC-43 BC) decried the ‘little prostitute’ who challenged the great Theoprastus (although he admitted her Attic Greek was good). Others admired Leontion: the Alexandrian teacher Aelius Theon (fl. c. 50 AD) portrayed her in his Progymnasmata as a prime example of someone from a low social class who achieved great things.

Even as late as the 14th century, Leontion was still making waves when Giovanni Boccaccio (1313-1375) included her in his Book of Famous Women (De mulieribus claris), a collection of 106 short biographies of famous and infamous women. The image of Leontion which we tweeted comes from an early 15th-century manuscript of a French translation of the Book of Famous Women (Royal MS 20 C V), one of several copies of that work and its later translations which are held at the British Library. 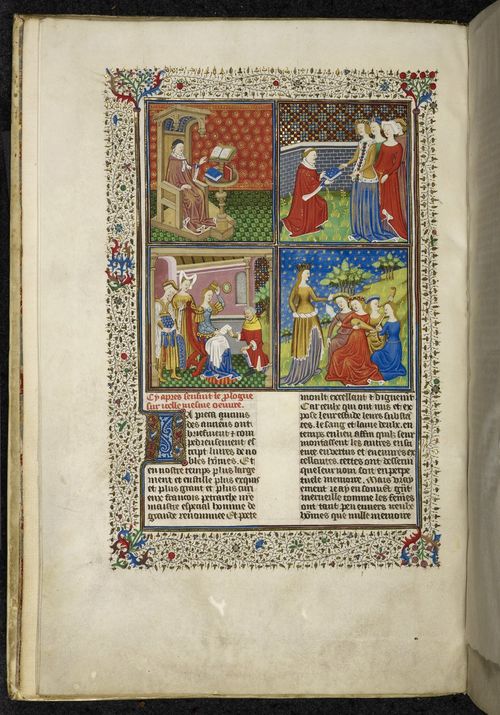 Miniature depicting  Boccaccio reading a book, Boccaccio presenting the book to Andrea Acciaiuoli and a group of women, a messenger presenting a letter to a lady, and a queen with four women playing musical instruments, with a full border and a foliate initial 'I', from Giovanni Boccaccio’s De mulieribus Claris in an anonymous French translation, Rouen, c. 1440, Royal MS 16 G V, f. 74r

In his account of Leontion’s life, Boccaccio acknowledged her immense learning and intelligence. Nevertheless, he seems to have regarded her more as a negative example to be avoided than a positive example to emulate. Boccaccio disparaged Leontion for criticising Theophrastus, arguing that her criticism was ‘a clear sign of an envious disposition’, although he admitted he had never seen Leontion’s writings himself to judge the content of her argument. Boccaccio also repeated the suggestion that Leontion was a prostitute, or at least wanton. Whereas some Late Antique authors interpreted rumours about Leontion’s past as a courtesan as proof that she rose to prominence from a humble background, Boccaccio claimed that Leontion must have been downwardly socially mobile. He argued that Leontion must have come from a noble family and later debased herself, because, as far as he was concerned, all clever people were born to noble families. The artists of manuscripts of the British Library’s French translations of the Book of Famous Women presented Leontion’s suitor as a distraction from her studies (even if Leontion’s gestures in some of the images might suggest to modern viewers that she was resisting the distraction). 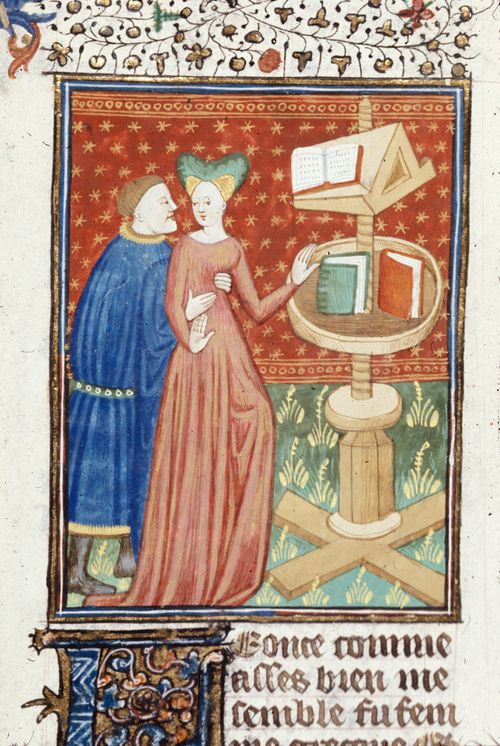 Debates over Leontion’s reputation, and the correctness of her argument, became a proxy for wider debates about women writers in late medieval western Europe. The poet Jean de Montreuil’s criticism of Leontion, in particular, may have been a thinly veiled attack on his contemporary female rival, Christine de Pizan (1364-1430). 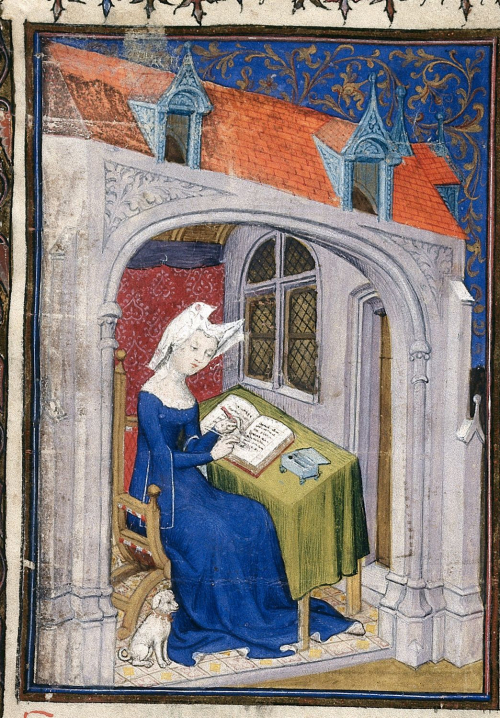 Christine herself, however, was more positive in her appraisal of Leontion. In her City of Ladies (which may have used Boccaccio’s Book of Famous Women as a source), she characterized Leontion as ‘a great philosopher’ who quite rightly corrected Theophrastus for ‘serious reasons’.

Later imaginings of Leontion, from the Late Antique period to the later Middle Ages and beyond, were as variable and diverse as opinions on the place of women writers. The idea that Leontion was a courtesan could be interpreted as an admirable rags-to-riches story or as a deplorable failure of her education. Leontion’s criticism of a male thinker left her open to charges of impertinence, but was also viewed as an inspiration by later female writers. On one point everyone seems to have agreed: even the most critical portrayals of Leontion were obliged to acknowledge her intelligence. At the very least, medieval writers were impressed that they were still talking about Leontion, in some cases more than a millennium after her death. Boccaccio concluded, the ‘fame [of Leontion’s writing] has lasted throughout the centuries down to our own age; hence, we cannot say that the work was a trifle or showed a lack of ability’ (translated by Virginia Brown, Famous Women (Harvard University Press, 2001), p. 124).