It is tourist season here in London, so while dodging groups armed with selfie sticks and smart phones, it's easy to wish that selfies didn’t exist. (Apologies to anyone whose holiday photos have been accidentally photobombed by a befuddled British Library curator.) But such curmudgeonly attitudes to self-portraitists overlook the fact that selfies have existed for a very long time and offer unique insights into some brilliant and multi-talented artists. The Oxford English Dictionary limits the definition of ‘selfie’ to ‘photographic self-portraits’. However, if we extend the definition of ‘selfie’ to cover self-portraits made with pen and ink, selfies have existed in Britain for over 1000 years. One of the earliest known manuscript self-portraits to survive from England was made by St Dunstan, archbishop of Canterbury (d. 988), in the 10th century. He depicted himself kneeling before Christ in a manuscript now known as ‘St Dunstan’s Classbook’ (Oxford, Bodleian Library, Auct F.4.32).

How can we tell if an image is a self-portrait? First, we can sometimes identify an artist by analysing brushstrokes, penwork, design or the accompanying handwriting, especially if the artist is well-known or worked on other manuscripts. However, even if we can identify the artist, how can we be sure that an image was intended as a self-portrait, rather than as an image of somebody else? This is where captions come in handy. Most known self-portraits are identified by nearby text which states or suggests that an image depicts its own artist. 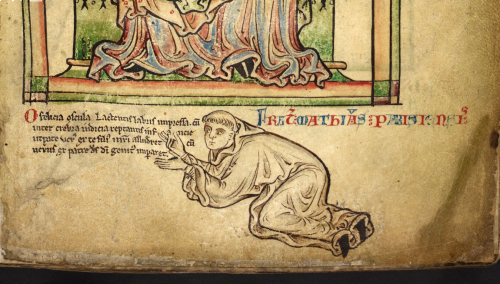 For example, the image above is a self-portrait of the noted medieval writer, scribe, artist and polymath Matthew Paris. We have other manuscripts which are known to have been copied by Matthew Paris, so we can be confident that the first part of this manuscript contains his handwriting and drawing. He also conveniently labelled this self-portrait of him kneeling beneath the Virgin and child: ‘Frater Mathias Parisiensis’. 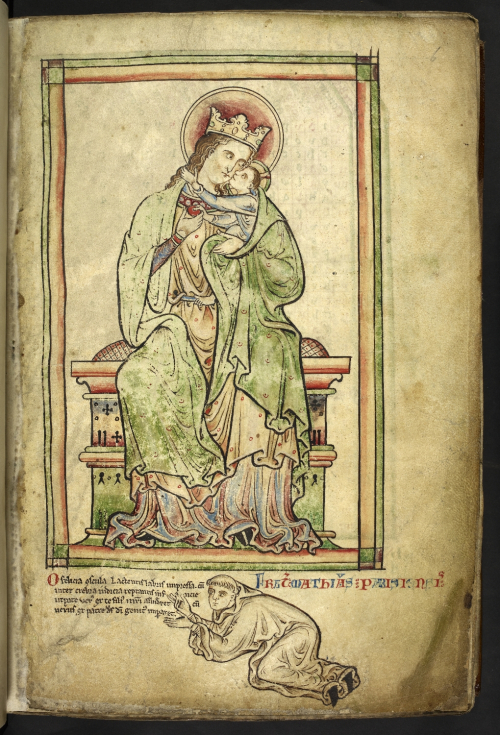 Similarly, red letters next to two historiated initials in a 13th-century Book of Hours (Add MS 49999) identify the self-portraits of William de Brailes, the book’s artist. William and his workshop are important as some of the earliest known producers of books in England who were not based in a religious institution. Although his self-portraits portray him with a tonsure, William did not depict himself wearing the habit of a religious order, and legal documents from Oxford suggest that he was based at a workshop on Catte Street, at the centre of the Oxford book trade. If selfies never existed, we would know much less about this important figure in the history of book production, and about the way he presented himself. 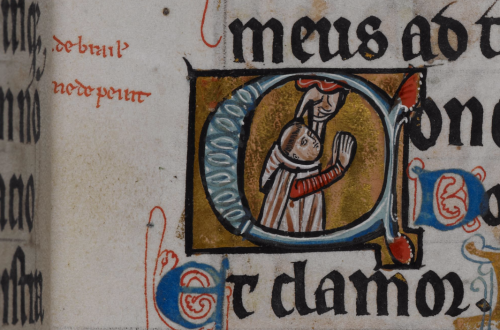 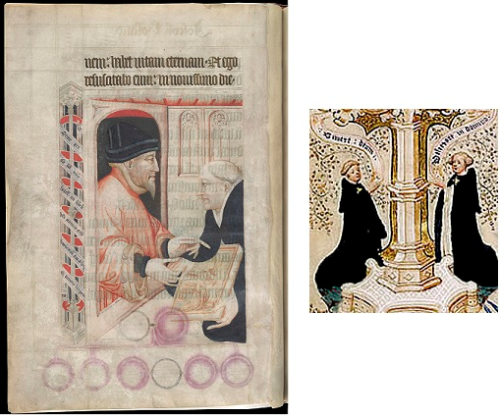 Other medieval images could be self-portraits, but this is more difficult to prove. Some scholars have argued that the Eadui Psalter contains a self-portrait of its scribe and possible artist, Eadwig (also spelled Eadui) Basan. Eadwig (fl.1012-1023), a monk of Christ Church Canterbury, was one of the most talented Anglo-Saxon scribes, writing charters, the Grimbald Gospels and part of the Harley Psalter, among other works. That said, there is no agreement whether Eadwig really depicted himself in this Psalter and, if he did, which figure he is supposed to be. 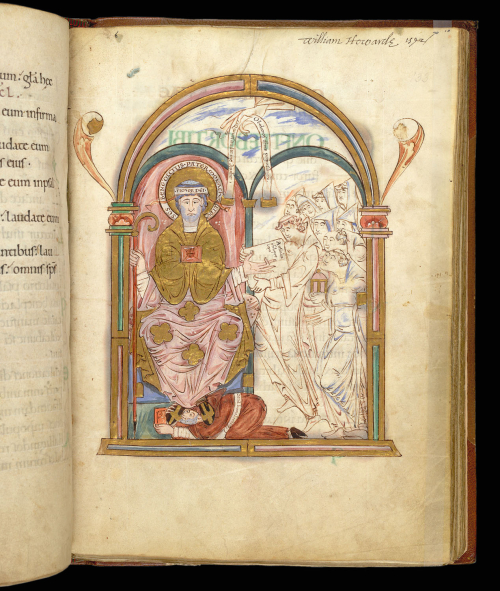 Some believe the figure kneeling at Benedict’s feet might be a self-portrait of Eadwig. Others argue that the prostrate figure could be a patron or could simply have been copied from an earlier exemplar. Still other historians have argued that Eadwig appears as a member of the crowd presenting a book to Benedict. Nevertheless, some of these figures seem a little slim to be Eadwig: it has been suggested that Eadwig’s second name, basan, was derived from a Hebrew word for ‘the fat’.  Or maybe this was just a very flattering self-portrait!

Whereas modern selfie-takers are often stereotyped as vain and self-promoting, medieval selfies frequently involved a different type of self-promotion, one focused on humility before the divine and saints. In other contexts, medieval artists and writers emphasized the dangers of narcissism and of being too concerned with one’s own appearance. The story of Narcissus, the figure from Greek myth who became obsessed with his own reflection, was retold throughout the Middle Ages, notably in the Roman de la Rose. 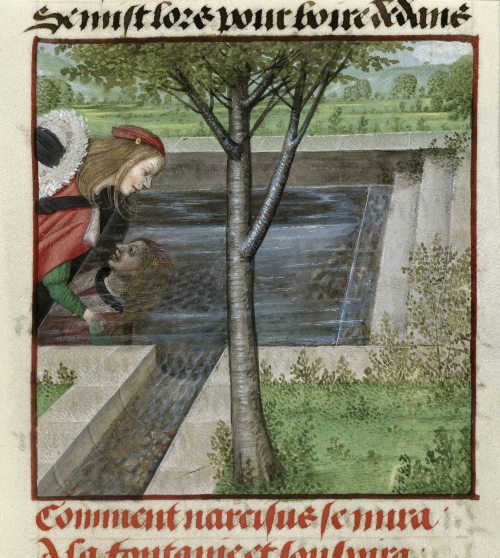 So, you can see that self-portraiture is not strictly a modern phenomenon. If you come to the British Library’s current major exhibition, Shakespeare in Ten Acts (open until 6 September 2016), you can even view a possible self-portrait of Richard Burbage, the actor who first played Hamlet, Richard III, Othello and King Lear.