When John Grandisson (1292–1369) became bishop of Exeter in 1327, he was not taking up an easy job. His predecessor, Walter Stapeldon, had been murdered in London the previous year. The cathedral was half-finished. By 1348, the city was struck by the Black Death, bringing poverty everywhere.

John struck back at the confusion with beauty, ensuring that building works could continue, amassing a library, and making space to write. Perhaps the most stunning book he owned was his Psalter, held at the British Library, Add MS 21926, is now available on our Digitised Manuscripts site. 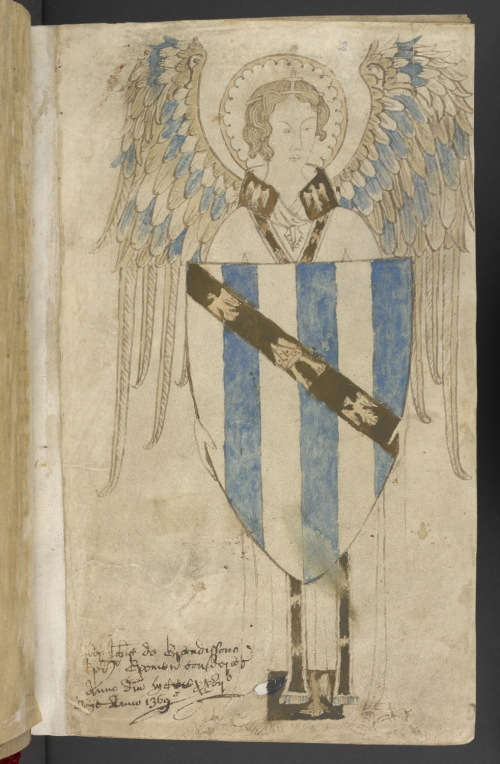 Although the ‘Grandisson Psalter’ was made long before he was born, around 1270–80, we know that it was owned by John because he conveniently had his coat of arms added to the opening page. His will also survives, in which he bequeathed the book to princess Isabella (1332–79), the eldest daughter of King Edward III and Philippa of Hainault. He called it ‘my rather beautiful Psalter’, with good reason.

The manuscript opens with a delightful calendar – like almost every liturgical book, as regular readers will know – showing the labours of the months and signs of the zodiac. Following this is a marvellous series of miniatures, first showing various saints. Opening the line-up are a cheerful St Christopher, carrying Christ, and St Margaret, triumphantly slaying a dragon with an extended cross/spear. 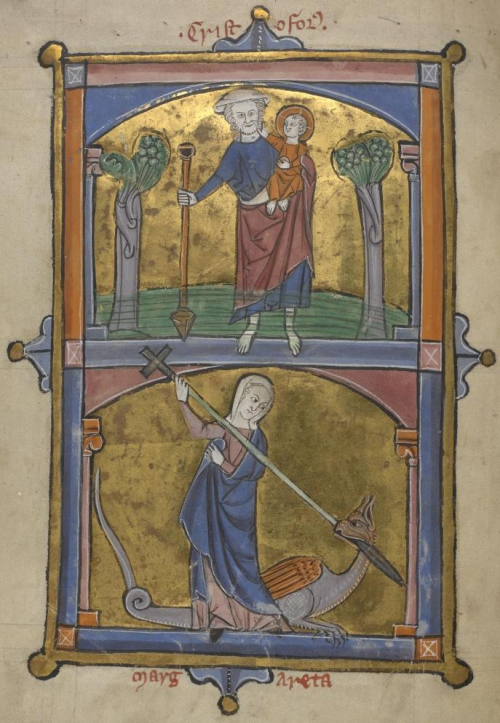 Following the saints are scenes from the life of Christ. Among these are an incredibly creepy Judas. He often comes across in medieval art as a merely pathetic figure, but here he looks to be aiming to replace Moriarty in the next series of Sherlock. 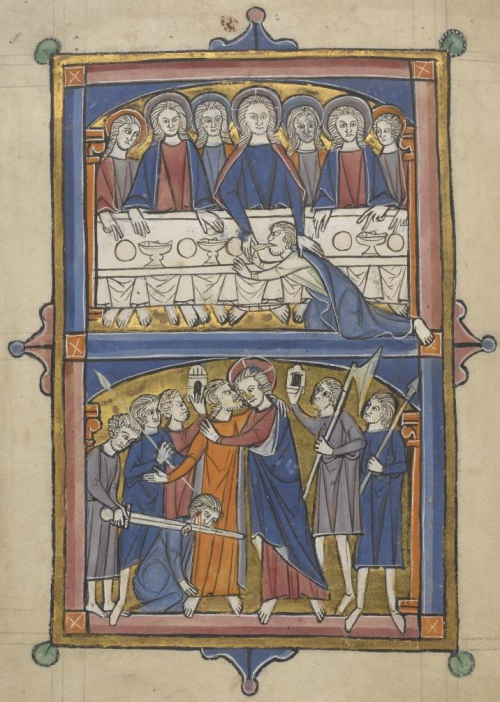 Another scene shows an appropriately sceptical Thomas touching the side and hand of Christ. In the panel below is another scene of physical contact, showing Christ having dinner, presumably with Martha and Lazarus: he looks mildly embarrassed to have Mary Magdalene washing his feet. 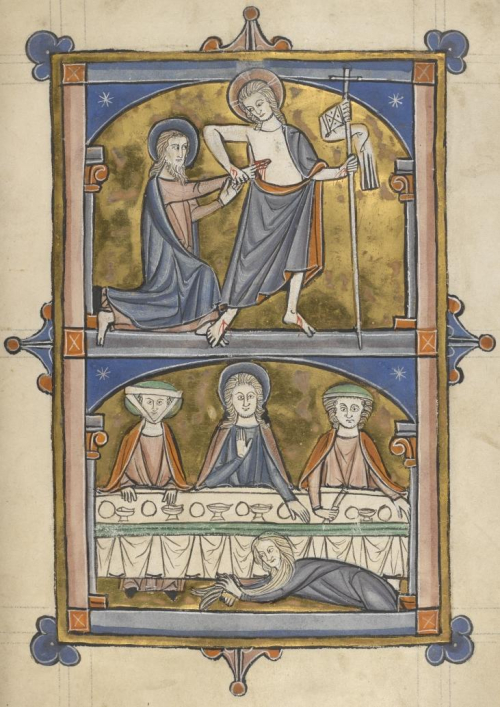 Following the miniatures, the psalms are beautifully written, with large decorated initials and intricate patterns filling in the white space at the end of the lines to create a unified block of text. Like several other illuminated Psalters from the period, some figures are included that act out the literal meaning of the text in a mildly humorous manner, probably meant as a memory aid. One page shows a man on a journey grabbing his tongue to illustrate the phrase, ‘I said, I will take heed to my ways that I offend not in my tongue. I placed a guard on my mouth’ (Psalm 39:1/Vulgate 38:2, ‘Dixi custodiam uias meas ut non delinquam in lingua mea. Posui ori meo custodiam’). 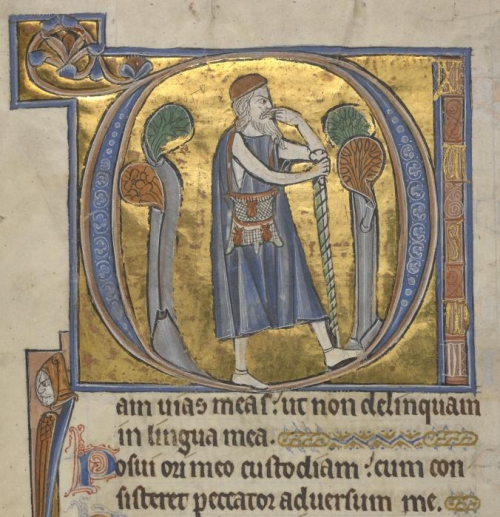 John Grandisson’s use of the book also comes through beyond his coat of arms. At the beginning of most psalms, music has been added in the lower margin giving the text and music of the antiphon, a sentence sung before and after the psalm. Since the music used for the antiphon is also used for the entire psalm, these small additions would have allowed him to sing the entire book. 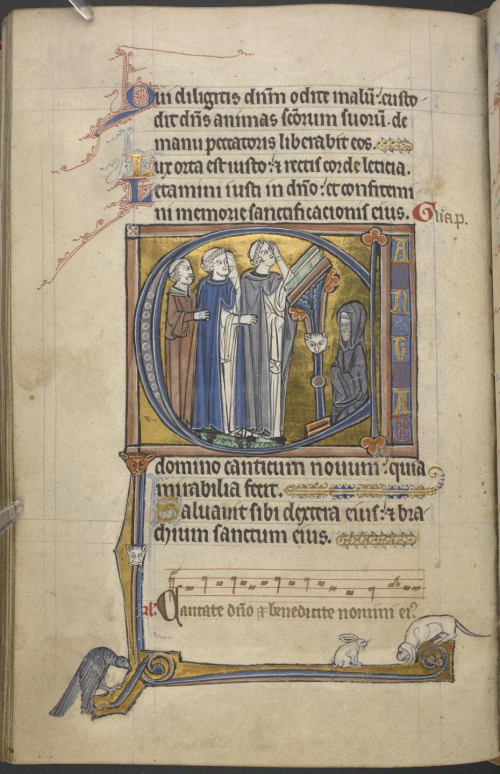 A motley crew of engaged and not-so-engaged clerics singing from a book on a lectern, with the chant for ‘Cantate domino canticum nouum’ (Psalm 97/98) later added: Add MS 21926, f. 132v

The continuing active use of the book is confirmed by the last section, which includes the text of the Office for the Dead. A later reader, probably John, used a slightly different variant on the rite than that recorded in the book. A scribe has carefully erased and modified sections of the text, also making changes to the punctuation of the text to fit local usage. These pages must have become particularly poignant for John in the context of the pestilence he faced. 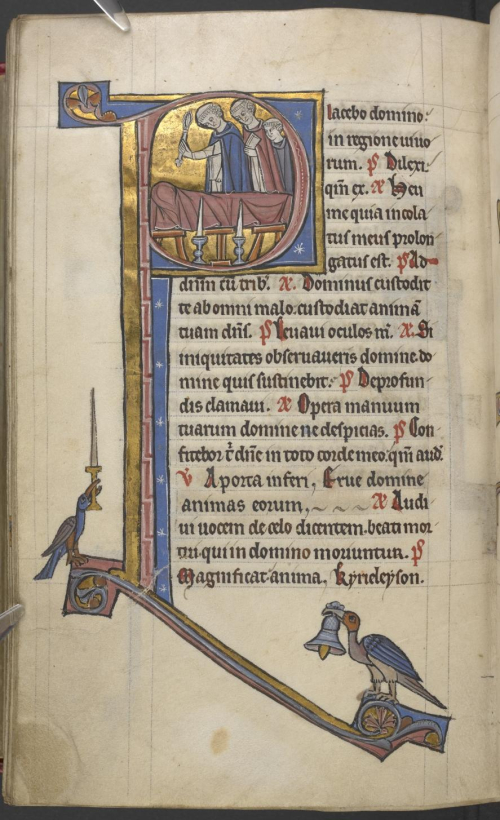 The beginning of the Office for the Dead, with the initial showing a body under a shroud being sprinkled with water: Add MS 21926, f. 208v

John Grandisson’s Psalter is a brilliant witness to the skill of artists and scribes in the late 13th century. We hope you love it as much as its original owners and creators.

This is a wonderful book. As I so often find studying early MSS what goes around comes around...how close are the eagles on the angel's collars to the nazi uniform badges ? Just a nasty red swastica hanging below is missing.