The Great Medieval Bake Off

The return of a certain baking contest to British television screens this evening marks the time of year when viewers are struck by a peculiar kind of ‘baking fever’. Typical symptoms include: massively overestimating your own baking talents; buying and using peculiar ingredients you would never usually use; and avidly discussing whose cake had more of a ‘soggy bottom’. This fascination with the baking process and an enjoyment of bread, cakes and pies has long been an important part of society. Baking is, after all, one of the world’s oldest professions, and baking guilds were among the earliest craftsmen guilds established in medieval Europe.

The high level of skill required in the baking craft was certainly recognised in medieval society. In the passage below, the Anglo-Saxon monk, Ælfric, implied that everyone can cook, but it took special skills to be a baker! 'You can live a long time without my skills', he described a baker saying, 'but you cannot live well without them.' 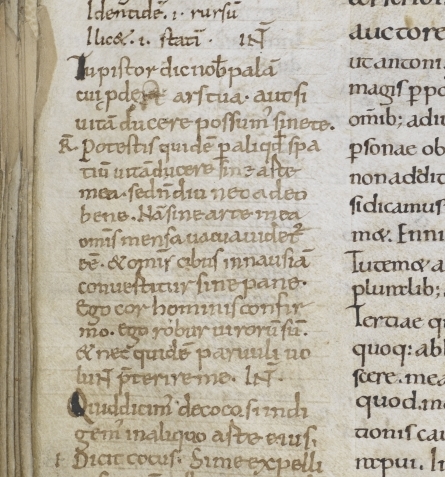 Detail of passage from Ælfric’s colloquy which claims that everyone can cook, but it takes special skills to be a baker (pistor), from marginal additions to a copy of Priscian’s De Excerptiones, Abingdon, 11th century, Add MS 32246, f. 16v

The realities of medieval baking are also depicted in the beautiful illustrations of the Smithfield Decretals. This manuscript contains a collection of 1,971 papal letters, heavily illustrated with scenes which complement the letters and aspects of medieval life. These two illustrations depict two figures, one putting a loaf of bread into the oven and another who waits nearby with a basket of loaves. It is likely that this depicts a communal bread oven, which was popular in the 1300s and allowed all members of the village to bake their own loaves. 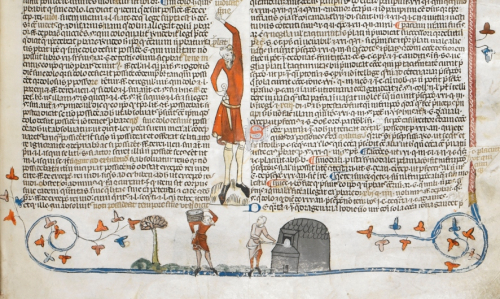 Detail of a man with loaves in a basket and a baker putting loaves in an oven or taking loaves out of an oven, Royal MS 10 E IV, f. 145v

Another illustration from a 14th-century manuscript depicts a rabbit baking its own bread in a miniature oven! 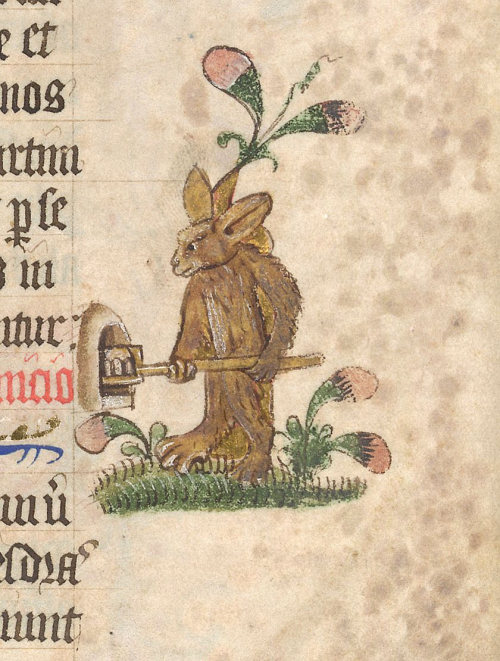 Detail of marginal image of a rabbit, from Lansdowne MS 451, f. 6r

In medieval society, bakers also provided extravagant fare at feasts and celebrations. Feasts were a fundamental part of medieval society and were used to celebrate victories, proclaim social bonds and enjoy the products of the land. 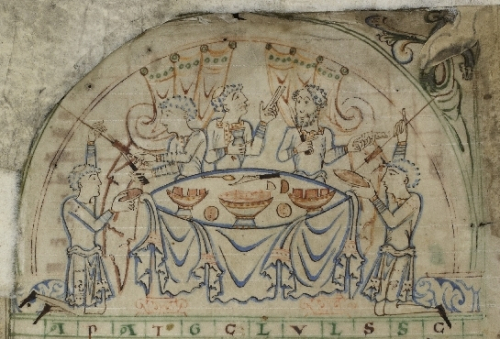 It is easy imagine that preparing for these feasts could be an extremely stressful experience for the cooks and bakers. The illustration below depicts an angry cook brandishing his knife at a member of the service staff.

Like their modern counterparts, medieval bakers created and used cookbooks, containing recipes and lists of ingredients. A particularly fascinating cookbook was recently discovered here at the British Library, which included recipes for hedgehogs, blackbirds, and even unicorns! The image below, however, is taken from the Forme of Cury, the oldest known instructive cookbook in the English language, dating to the 14th century. The world ‘cury’ is the Middle English word for ‘cookery’. This recipe is for a ‘toastee’, in which two pieces of toasted bread are flavoured with a spiced honey and wine sauce. This cookbook also includes recipes for ‘Pygg in sawse sawge’ or ‘Pig in sage sauce’ and ‘Bank mang’, the predecessor of blancmange.

Other medieval recipes can be found in the 15th-century cookbook known as the ‘Boke of Kokery’. This manuscript contains 182 recipes, instructing the reader how to ‘hew’ (chop), ‘mele’ (mix), and ‘powdr’ (salt). The page below describes some of the dishes served at a feast for the ordination of the archbishop of Canterbury in 1443. The page also describes a ‘sotelte’ or ‘subtlety’, which was an elaborate sugar sculpture, designed to replicate a biblical scene. 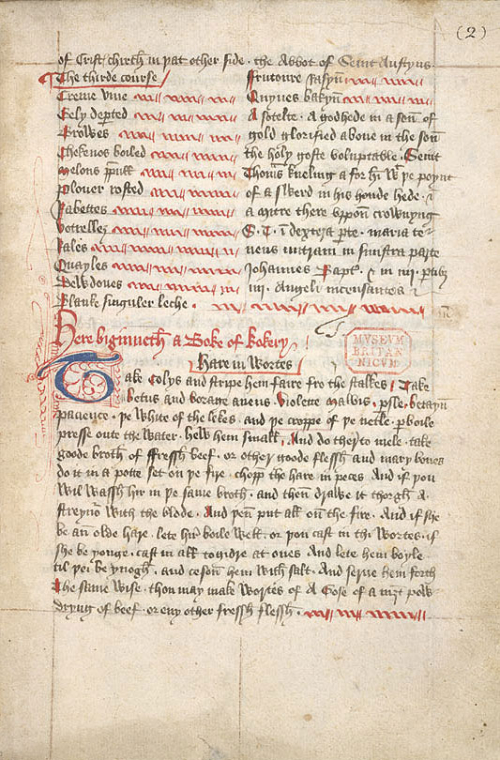 Description of sugar sculptures and other subtleties at a feast for the ordination of the archbishop of Canterbury in 1443, from A Boke of Kokery, England, c. 1443, Harley MS 4016, f. 2r

It is clear that there are many similarities between the medieval and the modern baker. Bakers are still valued members of society, use cookbooks and recipes, and cook for a wide range of functions. One particular difference, however, is the more tolerant approach that modern critics have for bakers whose culinary skills are just not up to scratch. No matter how bad their skills, modern bakers will not be drawn through the streets on the back of a horse with the evidence of their failure tied around their neck. 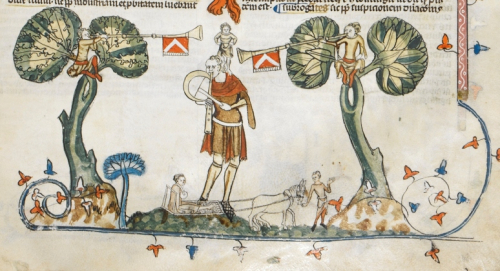 Detail of a bas-de-page scene of a bad baker being dragged on a horse-drawn hurdle with his deficient loaf of bread around his neck, from the Smithfield Decretals, Southern France (Toulouse?), c. 1300-1340, Royal MS 10 E IV, f. 94r

Neither will modern bakers be strung up for their failures of the kitchen, and meet the same fate as the baker in the image below. This is taken from the illustrated Book of Genesis in the Old English Hexateuch, and accompanies the story of the hanging of the Pharaoh’s baker. 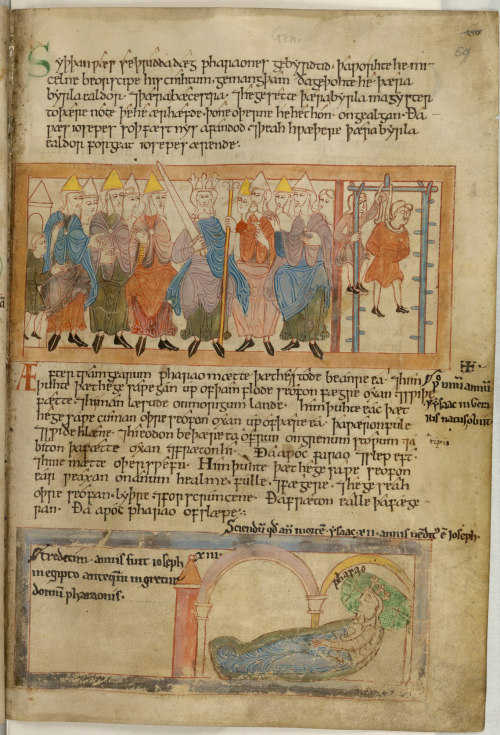 Depiction of the hanging of the Pharaoh’s baker in the Old English Hexateuch, Cotton MS Claudius B IV, f. 59r.

Thankfully to many an aspiring baker, modern society is far more tolerant of the varying talents of bakers and the cakes an loaves that they produce!

Are you sure 'Pygg in sawse sawge’ is pig in sage sauce, and not as I read it: as 'pig in sauce sawge', or 'pig in saus-sage' (sauce sage? Sausage? Sage sauce?)

Some fascinating stuff here (images of 11th century bread are very rare and the rabbit is a delight). Two quibbles however.

Medieval bakers certainly did not write or use cookbooks, at least so far as we know. That in fact is a problem in recreating medieval bread. The cookbooks that do survive say nothing about how to make basic bread.

Also, bakers weren't drawn through the streets for incompetence (which would have kept them out of the guild), but fraud. If a loaf was hanging around their neck, it was probably because it was under weight.