The Ceolfrith leaves are 1300 years old

25 September 2016 marks the 1300th anniversary of the death of Abbot Ceolfrith of the Anglo-Saxon monastery at Wearmouth-Jarrow. This means that three sets of fragments in the British Library have had their 1300th birthday. Abbot Ceolfrith is most well-known for the trip he intended to make to Rome at the end of his life, to present a majestic manuscript to the pope. Sadly, Ceolfrith passed away at the grand age of 74 before he reached the Holy City. Although the manuscript he had intended as a gift most probably continued its journey to Rome, it soon made its way to the Abbey of the Saviour, Monte Amiata in Tuscany, before finding a new home at the Biblioteca Medicea Laurenziana in Florence in the 18th century.

This legendary manuscript is now known as the Codex Amiatinus, and is famous for its great size, extravagant design, and for being the oldest complete copy of the Vulgate Bible in existence. The manuscript is over 48cm tall, weighs 35kg and has more than one thousand pages. As can be seen in the photograph below, it was an extremely impressive manuscript and was designed to make a statement. 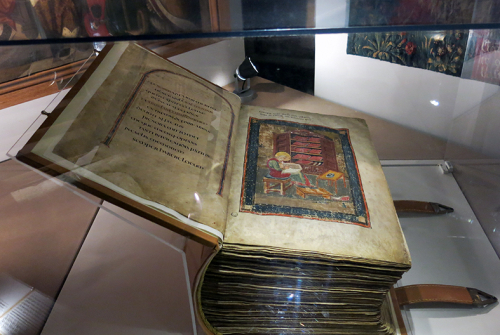 The Codex Amiatinus on display, photographed by Maxence

What makes the achievements of the monks at Wearmouth-Jarrow even more remarkable is that they not only produced the Codex Amiatinus, but also two more copies of this great Bible. In Bede’s History of the Abbots he described how Abbot Ceolfrith had commissioned three copies of the Bible, ‘one of which he took with him as a present when he went back to Rome in his old age, and the other two he bequeathed to his monasteries’ (trans. by J.F. Webb, in D.H. Farmer (ed.), The Age of Bede, (London, 1983).) Within the collections here at the British Library are a number of fragments which are believed to be the remains of the two bibles which remained in Anglo-Saxon England. 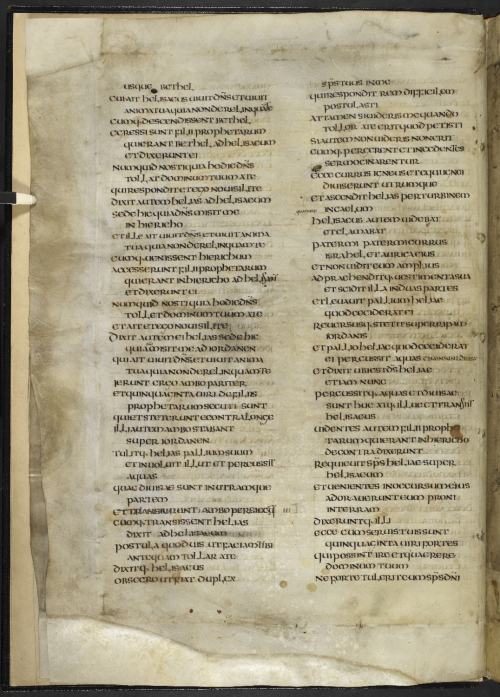 These show that in addition to their magnificent size, the interior of these pandects was also designed to be visually impressive. The script and decorative images were specifically chosen to replicate an Italian design. This Italian style of script was different in many ways to another script which was commonly used in Northern England at the same time. Can you spot the differences between this script used in the Codex Amiatinus and Ceolfrith Leaves and the script used in an early copy of Bede’s Ecclesiastical History?

The British Library’s fragments all survive in the form of single leaves of parchment and are catalogued under three separate references, Add MS 45025, Add MS 37777 and Loan MS 81. These fragments have all taken rather unique and remarkable journeys from the scriptorium at Wearmouth-Jarrow into the collection here at the British Library. The fragments in Additional MS 45025, more commonly known as the Middleton Leaves, were discovered being used as covers for deeds pertaining to the lands owned by the Willoughby family of Wollaton Hall (Nottinghamshire). These fragments were bought from Lord Middleton in 1937 by the Friends of the National Libraries for the British Museum. A previous blog post also discussed the possible link between these fragments and a ‘great Bible’ given to the monks of Worcester by King Offa of Mercia in the 8th century. 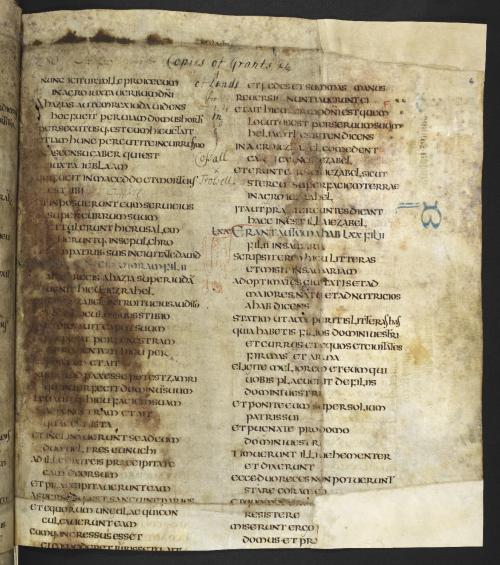 This fragment represents both stages in the lifecycle of these pieces of parchment. The parchment contains an extract of the Book of Kings in the original script, with its characteristically Italian style which can still be seen in the Codex Amiatinus today. In the upper margin it is also possible to see the later annotations made to the parchment when the leaf was used by the Willoughby family to wrap land grants. Fragments of manuscripts have often been reused in creative ways, as discussed in this blog post.

When viewing these leaves on Digitised Manuscripts, it is easy to forget that they were once part of two great Bibles which would have matched the magnificent size and splendour of the Codex Amiatinus. These three Bibles would have been an extraordinary feat of craftsmanship, using a wealth of resources to produce, and would have been extremely impressive to those at the height of Anglo-Saxon and Italian society. The Codex Amiatinus and its two sister pandects are most definitely among brightest lights of intellectual achievement which shine from the supposed ‘Dark Ages’.

Another incredibly important manuscript which was supposedly produced by the monks of Wearmouth-Jarrow was the St Cuthbert Gospel. This is a copy of the gospel of St John, which was produced in honour of St Cuthbert in the late 7th century and was buried within his coffin. This manuscript shows the same beautiful uncial script found in the Codex Amiatinus. More information about how this manuscript came to reside in the care of the British Library can be found two previous blog posts.