A reminder for your diaries, for everyone who is interested in Greek and Byzantine manuscript culture. The British Library is holding a day conference on our Greek manuscripts on 19 September 2016, featuring an international panel of experts (from the United Kingdom, Greece, Bulgaria and France). This is the culmination of the third phase of our project to digitise all the British Library's Greek manuscripts, and to mark the launch of our fantastic Greek Manuscripts Online Resource. 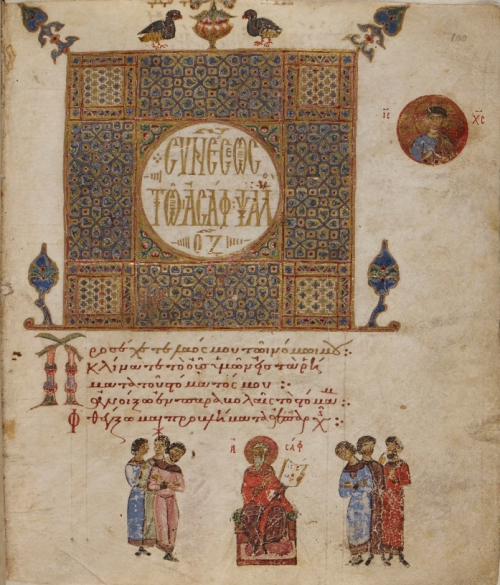 We'd love you to be able to join us: you can book your tickets here. You can also book tickets to both the conference and an evening lecture by Michael Wood at a reduced rate. Not only will you hear discussion of illuminated manuscripts, palimpsests and Greek written culture, but coffee, a sandwich lunch and a reception are also provided to those attending the conference.

Greek Manuscripts at the British Library

4:30–5:15
An end or just a beginning? Discussion on prospects for digitization and cataloguing, introduced and moderated by André Binggeli and Charlotte Roueché

Greek Undertexts in Syriac Manuscripts from Egypt In the British Library

Almost all Syriac manuscripts earlier than the 12th century have been transmitted through two monastic libraries in Egypt: St Catherine’s Monastery, Sinai, and Deir al-Surian in the Nitrian Desert. The latter was the source of much of the British Library’s extensive collection of Syriac manuscripts, and among them are some 65 palimpsests, the subject of this paper. Although for the most part the undertexts are in Syriac or Christian Palestinian Aramaic, in a number of manuscripts it is Greek (in one case, Homer).

Sebastian Brock is a former Reader in Syriac Studies at the University of Oxford’s Oriental Institute and a Professorial Fellow at Wolfson College.

A New Planet Swims into our Ken: Editing Greek Texts in the Digital Era

This paper will consider the Greek manuscripts in the digitization programme: what they are, how are they accessed, and what can one do with them. There will be a focus on the manuscripts collected by Frederick North, 5th Earl of Guilford (d. 1827).

Manuscript digitization is of enormous benefit to those who are primarily concerned with the physical appearance of books rather than their textual contents. In the miniatures of Add MS 11870, the peculiar manners of different artists can be distinguished. Add MS 36928 shows how a scribe and a miniature painter collaborated. The richly illustrated and as yet unstudied Egerton MS 3157 reminds us that digital images ought to be supplemented with relevant catalogue information.

John Gennadius assembled an extensive collection of Greek manuscripts from the 1870s onwards when he held a diplomatic post in London. Some of the most important manuscripts in his collection are now at the Gennadius Library in Athens, several examples of which belonged to Lord Guilford.

Maria Georgopoulou is director of the Gennadius Library, The American School of Classical Studies at Athens, Greece. Her publications focus on the artistic and cultural interactions of Mediterranean peoples in the Middle Ages.

Dr George Etheridge, former Regius Professor of Greek at Oxford, addressed a Greek Encomium to Queen Elizabeth I on King Henry VIII for the Queen’s visit to Oxford in 1566. It is now uniquely preserved in Royal MS 16 C X. The electronic edition of the text employs an original interface that graphically links words or phrases in the digitized manuscript image with their counterparts in the transcribed or edited Greek text and in the English translation, supported by multiple dynamic scholarly apparatus including a lexical analysis of each word with direct links to several online dictionaries. This exploratory editorial project is accessible at http://hellenic-institute.rhul.ac.uk/Research/Etheridge/.

Christopher Wright is a research fellow at the Hellenic Institute in the Department of History, Royal Holloway, University of London.

Philip Taylor is an Honorary Research Associate at Hellenic Institute of the Royal Holloway, University of London.

Linked Data: The role of manuscripts – or Now What?

The Greek manuscripts project makes rich materials available to a worldwide audience. Manuscripts are bearers of meaning: the challenge now is for those who have the expertise to make this meaning apparent, to ensure that these are more than just images. But no one person – or even group of people – has all the relevant knowledge. Instead, in the spirit in which Tim Berners-Lee developed the web, we need to think in terms of Linked Open Data. We need to link this material to other resources which can enhance what we see. The modern owner of a manuscript might be linked to an entry in the Oxford Dictionary of National Biography; earlier owners, or scribes, might be linked to their entries in one of the series of Byzantine prosopographies. Locations can be linked to an online gazetteer. As resources develop, it will be increasingly possible to link manuscripts to the texts which are based on them: the pioneering work here has been done by the Homer Multitext Project. This is just a beginning!

Charlotte Roueché is an Emeritus Professor in the Department of Classics at King’s College London. For many years she has explored the use of digital tools for the analysis and publication of Greek texts. She is particularly concerned with using the Internet to bring the highest possible level of scholarship to the widest possible audience.

Closing Discussion: An end or just a beginning?

What are the implications of making these rich materials available online? How can we support scholars in exploiting them? What will the ordinary reader need? How will we keep track of what journeys our manuscripts now undertake?