Palimpsests: The Art of Medieval Recycling

The art of recycling — re-using waste materials to reduce consumption of fresh raw materials — may seem alien in a medieval context. Yet when it comes to writing, past peoples were often much more sparing than many of us today. 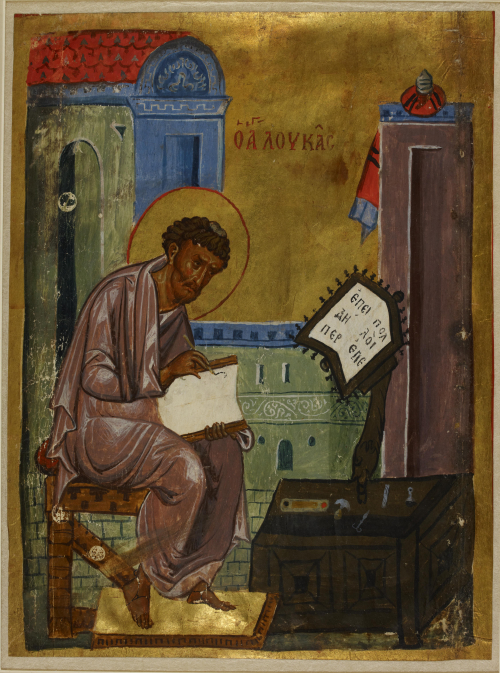 Producing papyrus sheets or parchment volumes was not an easy or cheap endeavour. In order to produce a complete Bible on parchment, the skins of approximately 200 sheep may have been needed. One way to save parchment was to write the words and sentences continuously with no punctuation at all. This might have made reading more difficult and open to misunderstanding, but it definitely saved space.

Another way to save parchment and papyrus was to reuse it. Papyrus scrolls were usually written on one side only, where the fibres were horizontal and more suitable for writing, while the other side with vertical threads was usually left blank. In times of need, however, scribes reused the more inconvenient side of scrolls that they found unimportant or superfluous. The practice of writing tax receipts and payment reminders on the reverse of classical dramas and poems has sometimes saved classical literature which would otherwise have been lost. Examples at the British Library include Papyrus 787 preserving Demosthenes’s works, Papyrus 1182 with Epicurus’s treatise and Papyrus 1191 containing Homer.

Reusing parchment pages was more complicated, since books often had writing on both sides. By taking pages of books that were unused, incomprehensible or perhaps banned, it was possible to scrape or wash off the old writing to achieve a new blank page. It is the outcome of this recycling process that we call a palimpsest (the “re-scratched” page).

Many manuscripts with recycled pages are preserved and it is always intriguing to discover what the old writing contained and why it was destroyed. Deciphering undertexts is not always easy. Sometimes the recyclers did not make a very thorough job and the old writing is so transparent that modern viewers can easily read and identify the recycled pages: examples include the epics of Homer and the geometrical works of the mathematician Euclid of Megara. If the recycling was done meticulously, special techniques are necessary to recover the text. Thanks to the British Library’s multispectral imaging technology, many of the seemingly unreadable undertexts can now be recovered. Recently we managed to discover remnants of at least three manuscripts in one 15th-century Greek liturgical book, including parts of a 9th-century gospelbook, some leaves from a 10th-century service book and two scraps from a 12th-century copy of a Greek commentary on Plato by the 5th-century Proclus. 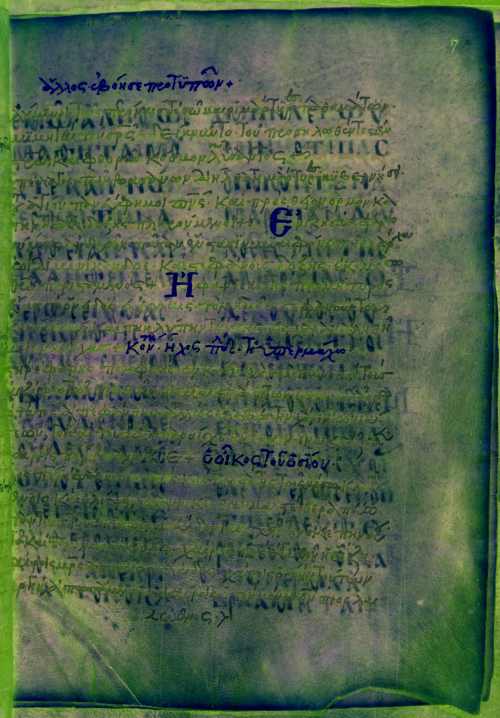 Multispectral images of a 15th-century service book showing the capital letters of a 9th-century gospel behind the script, Add MS 36823, f. 17r

These brownish columns are what remains of a 12th-century copy of Proclus’s Commentary on Plato’s Timaeus recycled in this 15th-century liturgical manuscript: Add MS 36823, f. 123r

Perhaps the most thrilling find yet is a double-palimpsest from Egypt, a 10th-century manuscript written in Syriac (a Semitic language of the Christian East) on pages that contain a twofold layer of Latin texts. One is a commentary on Donatus’s Latin grammar attributed to Sergius from the 7th century, written above another 5th-century Latin text preserving fragments of the otherwise lost historical work of the 2nd-century Granius Licinianus, whose writing is known only from these recycled pages. 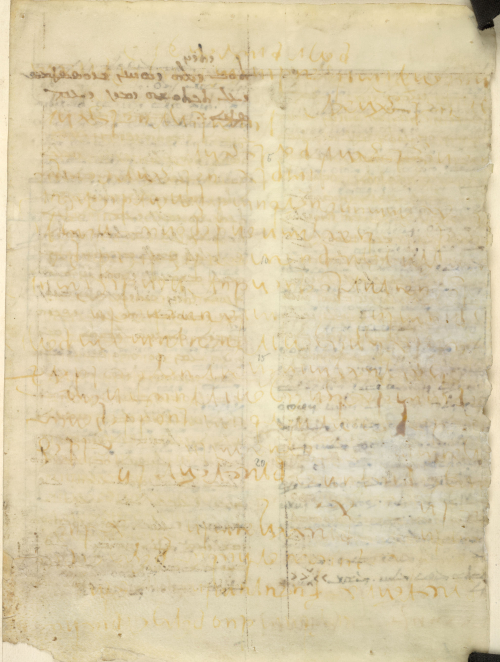 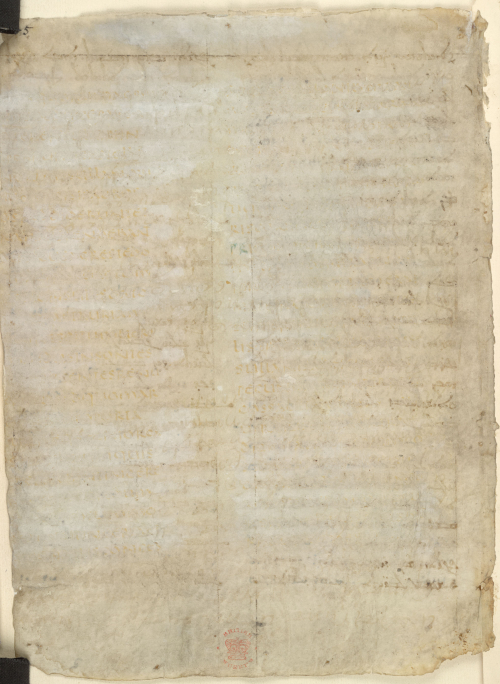 Capital letters of the Latin text of the Annals of Granius Licinianus under the 7th-century cursive Latin grammatical text in the pages of the 10th-century Syriac manuscript of John Chrysostom’s homilies, Add MS 17212, f. 5r

How these precious fragments ended up in Egypt and why were they recycled to accommodate Syriac translations of Greek religious texts are questions that are very hard to answer. Sebastian Brock, one of the foremost experts on Syriac manuscripts and literature, will try to crack the puzzle in his upcoming lecture at the British Library’s conference on Greek manuscripts. You can book your place to hear the end of the story here.

A Need for a New Definition for the Term ‘Palimpsests’

By present definition a palimpsest fulfills two requirements: the first is that the old text was scraped or washed off (palímpsēstos, "again scraped") and the second one is that a new text was written on the blank page. Obviously, overwriting factor is always true, otherwise we would be dealing with a usual manuscript. I suggest that, as a rule of thumb, in case of parchment volumes or papyrus sheets the first requirement is hardly ever valid.

I’ve studied 7 pages of Gothic palimpsests and among them five were certainly washed and scraped in antiquity.(1) These parchments are visibly mutilated, with holes and burnt area.

Examining Latin so-called palimpsests (2) I’ve concluded that the new text was simply written over the old one. Sometimes the page was just turned around and the new text was written in the opposite direction. No washing or scrapping was conducted.

Observing several images of the Archimedes palimpsests, I suggest that no cleaning was exercised there. The pages were turned 90 percent and a new text was written over the old one. Browsing through photos of various so-called palimpsests, I haven’t found any which, in my opinion, follow the present definition, that is "again scraped."

In fact, not erasing those manuscripts with all kind of chemicals make perfectly sense, as such treatment causes great damage to the delicate material. Even nowadays I suggest that in most cases one can read quite easily the overwritten text, especially when one examines the original manuscripts, e.g. the extensive readings of Monsignor (Later Cardinal) Angelo Mai (1782 - 1854).

I suggest that the Gothic manuscripts were so viciously washed and scrapped because the people who reused those parchments wanted to erase any traces of the Goths, whom they apparently hated so much.