Cannabis can be used to treat swollen breasts. The urine of a child has wrinkle-busting properties. Fern, mixed with wine, is a good treatment for wounds. (Sounds promising, although I might go easy on the fern part.) And should you fear encountering snakes, it is best to carry Adderwort with you. These are some of the nuggets of medical wisdom to be found in our recently digitised Sloane MS 1975. The manuscript is an illustrated collection of medical texts, made in England or Northern France in the last quarter of the 12th century. 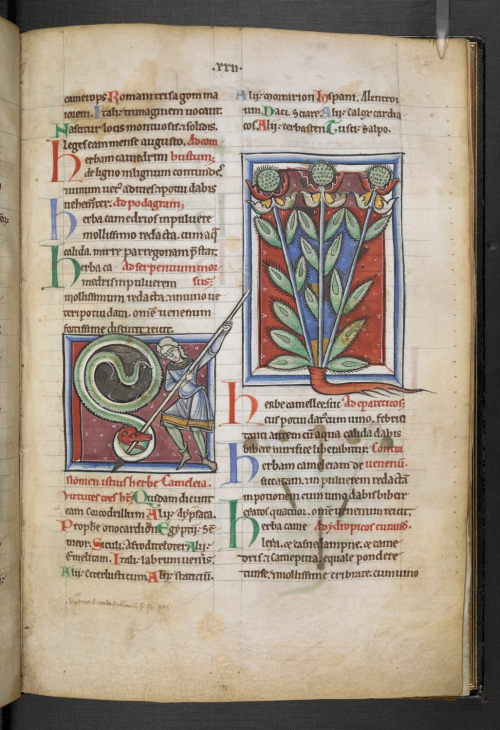 Sloane 1975 contains a collection of different works, including a treatise on herbs by Pseudo-Apuleius (the name pseudo-Apuleius is used to refer to an anonymous 4th-century Roman author whose work was sometimes erroneously attributed to Apuleius), Pseudo-Dioscorides, 'De herbis femininis', and a text by Sextus Placitus of Papyra (active c. 370 CE), entitled 'De medicina ex animalibus'. It is extensively illustrated, and the images are a joy.

The image below depicts the Mandrake plant, which was used as an anaesthetic and treatment for melancholy, mania and rheumatic pain. (The plant can induce hallucinations  -- it produces tropane alkaloids: tropane alkaloids are also produced by Erythroxylum novogranatens, the plant which is used to create cocaine.) The roots of the mandrake have the habit of forking in two directions, and can appear to resemble a human figure. Depictions of it often show the plant with a human body or head. It was thought that the plant would scream when pulled from the earth and any who heard the screams would be condemned to death or damnation. Harvesting the plant would therefore pose some problems. The manuscript advises that strings should be attached to the plant and the other end of the strings attached to a dog, which would then pull the plant from the ground. Below, the dog can be seen harvesting the mandrake. 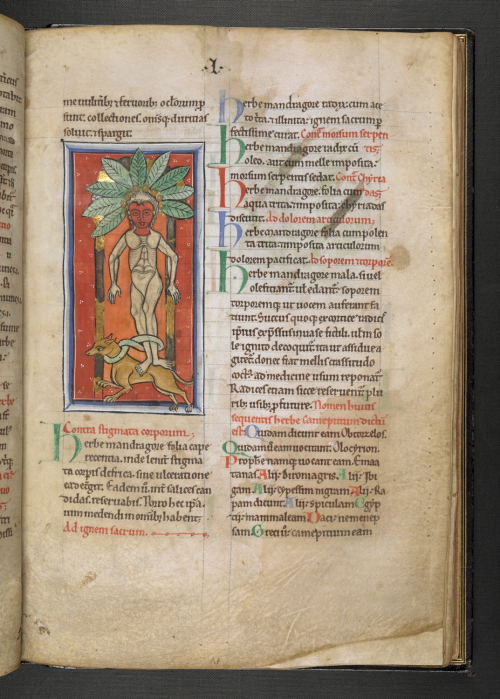 The manuscript’s illustrations serve a variety of purposes. This one, below, shows the appropriate way to deal with a rabid dog. (Can you tell it’s rabid? The clue is in its *rabid*, red face.) 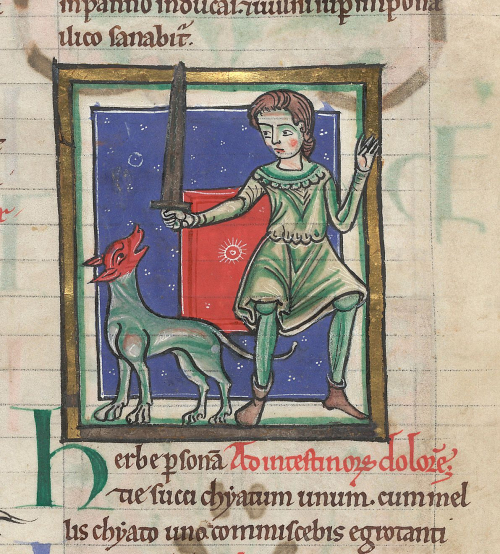 Should you be bitten by a rabid dog, the herbal elsewhere advises, it is best to consult a hen. If the hen has a good appetite, it bodes well for a speedy recovery. 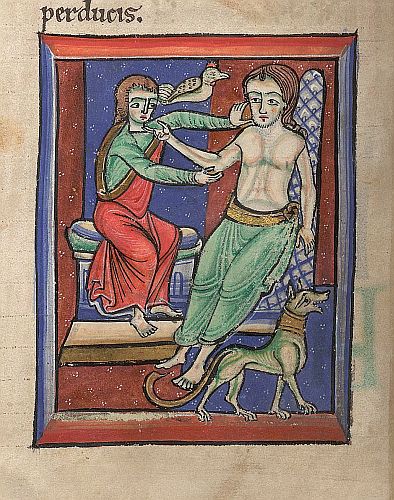 Many of the images illustrate the properties of particular plants, like the one depicting the mandrake. Others, however, appear to have a more incidental purpose. The illustration for Carmel gestures to the alternative names for the plant. Curmel is called ‘Centauria Maior’ in Greek, hence the image below depicts a centaur holding the plant. 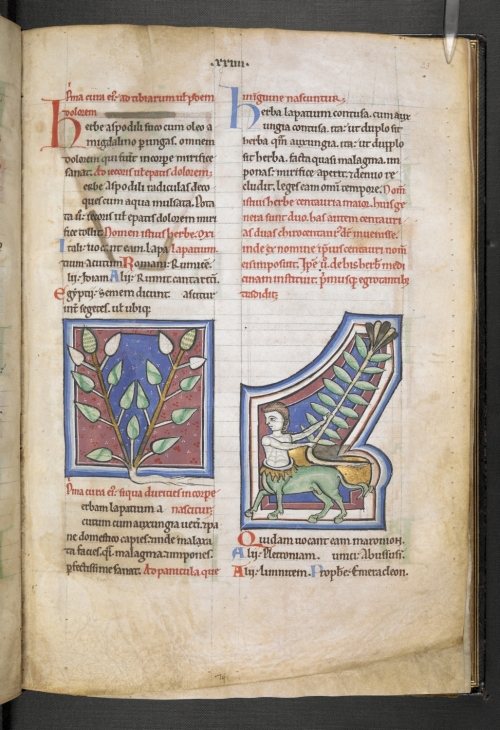 Centaurs make an appearance elsewhere. This image shows the centaur Chiron giving herbs to the goddess Diana or Artemis (who was his foster mother according to some sources). He has apparently named three plants of the genus Artemisia after her. 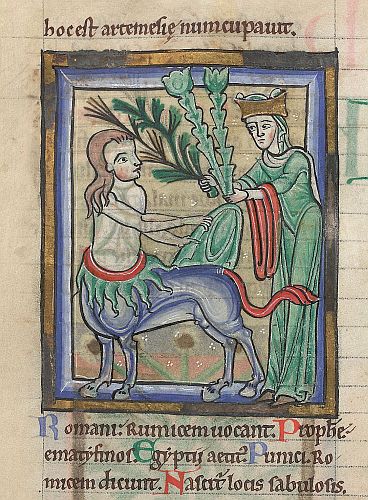 The manuscript also contains a text called 'De medicina ex animalibus', which has some wonderful images of animals, including something that bills itself as an elephant, but in person looks more like a disappointed tapir vomiting up a tusk. 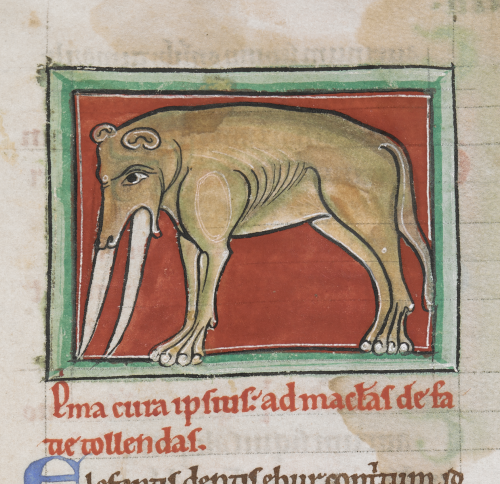 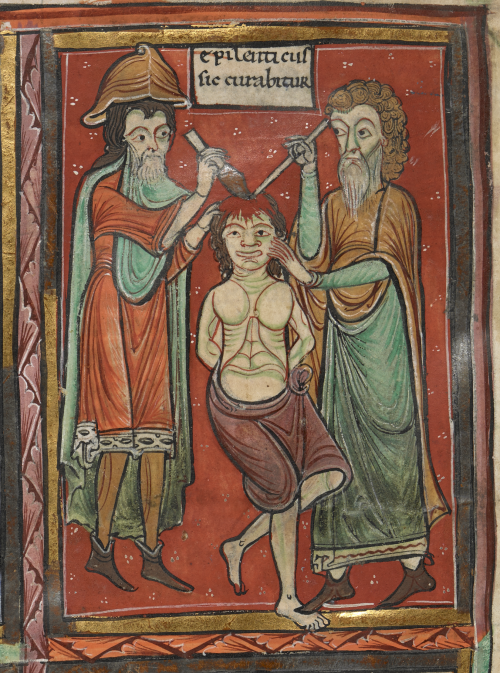 A few folios on and the images get decidedly worse (yes, we also thought they couldn't get any worse). In the top left-hand corner of this image we can see a doctor removing haemorrhoids from a patient (the bowl on which the patient is standing may have been intended to catch the blood). Below this a doctor is excising a nasal growth, and to the right a doctor is removing cataracts. 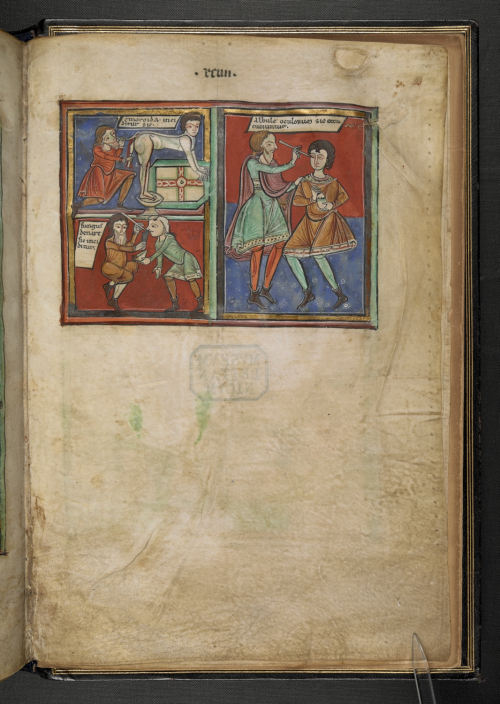 This manuscript is currently on show in Cambridge, at the Fitzwilliam Museum's Colour exhibition. Read more about this exhibition and the manuscripts we have loaned to it here.