Valerius Maximus: A Handbook for the Roman Arriviste?

In Rome in AD 31, Valerius Maximus finished his collection of almost a thousand stories from the Roman world. It was a time of great change and uncertainty, but also the beginning of a new era, as the great Roman Republic had been replaced by the rule of emperors, a model that would continue in Western Europe until the 20th century. Many people lamented the loss of the values of the past and the poet Lucan wrote, ‘From now on until the end of time we are slaves’. It seems that Valerius wanted to preserve the great stories to entertain, to connect his fellow citizens to their great past, and to provide a noble code of behaviour based on the examples of their illustrious forebears. 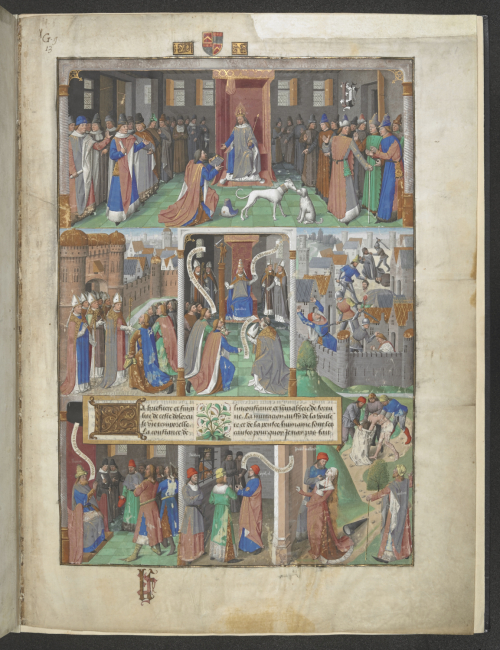 Valerius Maximus presents his book to Tiberius, seated in his court; ten sons of Rome are sent to Etruria for religious instruction; Metellus forbids the Consul, Postumius, to leave Rome; Rome is conquered by the Gauls; Numa Pompilius, King of Rome, threatens his people with death if they do not perform religious duties; Jehoiachin, King of Judah, in prison, hears Ezechial prophesying; Publicius Malleolus murders his mother and is placed in a sack to be thrown into the sea as punishment: Book 1, Les Fais et les Dis des Romains et de autres gens, Paris, 1473–c. 1480, Harley MS 4374, f. 1r.

Valerius took his stories from the works of great Latin authors including Cicero, Livy and Varro, organised into 9 books with themes such as happiness and ancient customs. The books were divided into 8 or 10 chapters, each dealing with a specific topic and containing stories from Ancient Rome followed by foreign tales, mostly from Ancient Greece, to illustrate the topic.  In his preface, Valerius stated that he wanted to save others trouble, so he organised his stories for easy reference. 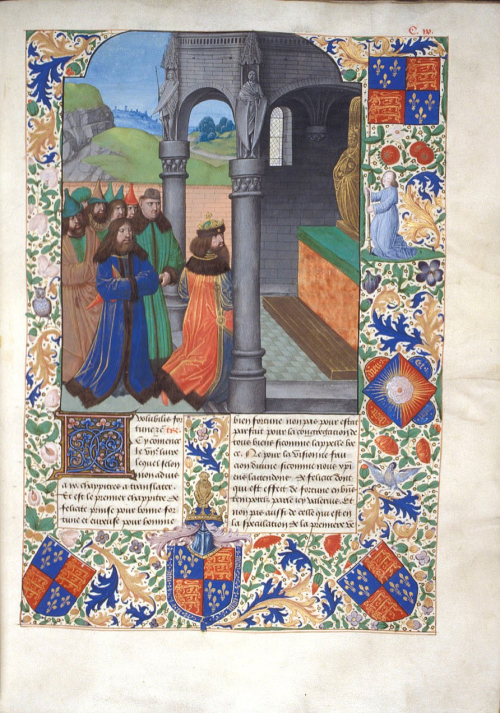 Valerius's work provides a unique insight into the lives of ancient Romans and their views on many subjects. The picture painted is not entirely rosy; the cruelty and brutality of the Romans towards their enemies and opponents is portrayed honestly, and there are numerous examples of bloody conflict in the civil wars at the end of the Republic. The political changes brought with them huge social changes; it was a time of social mobility, with the old political aristocracy swept away and a new elite from more modest backgrounds, some from the provinces, taking its place. The new administrators, men like Pontius Pilate in Judea, may have used the examples in Valerius’s work to help them acquire the knowledge and values that they needed to govern and to avoid the sneers of the old elite. It was described as ‘Practical ethics for Roman gentlemen’ in the title of a study by C. J. Skidmore.

An example of nouveau riche conspicuous consumption is provided as a warning at the beginning of the last book, on vice. 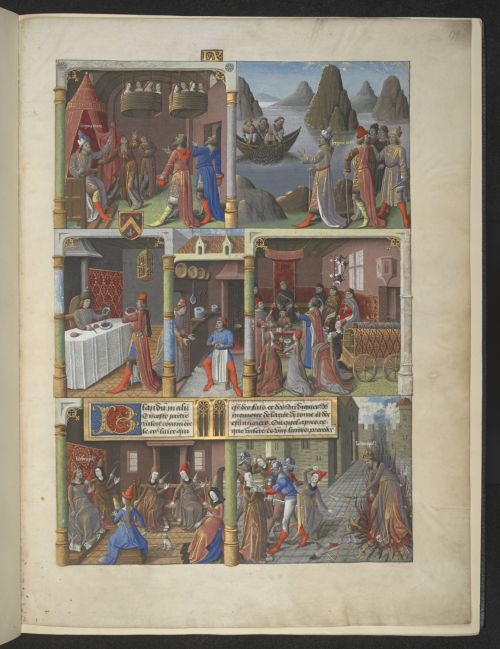 Sergius Arata exhibits his hanging baths to his friends and inspects the artificial reserves he has constructed for fish; mid tier: the son of Aesopus feasts on the most costly singing birds; the Roman women plead for the repeal of the Oppian law forbidding female extravagance; lower tier: Sardanapalus, King of Assyria, clothed in women's attire, sits spinning among his wives, then burns himself and his possessions when he loses power, Book 9, Les Fais et les Dis des Romains et de autres gens, Paris, 1473–c. 1480, Harley MS 4375, f. 179r.

Although we do not really know how popular Valerius’s work was in antiquity, it was still copied the Carolingian period. In the later Middle Ages it was amazingly successful, with more copies surviving than any other Latin prose text apart from the Bible. Some studies have compared the use of exempla from the Old Testament with Valerius’s moral examples. In the British Library we have copies from France, Germany and Italy. 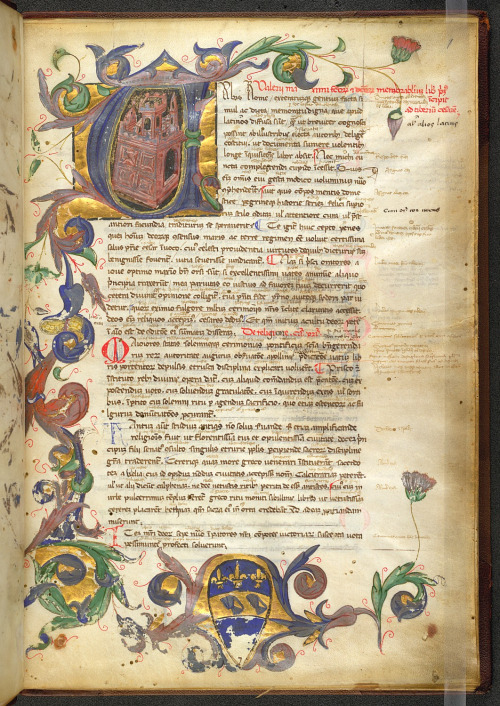 Vernacular translations introduced the text to an even wider readership, perhaps the most well-known being the French translation begun for Charles V in 1375 by Simon de Hesdin, a knight hospitaller, and expanded and completed by Nicholas de Gonesse for the Duc de Berry. 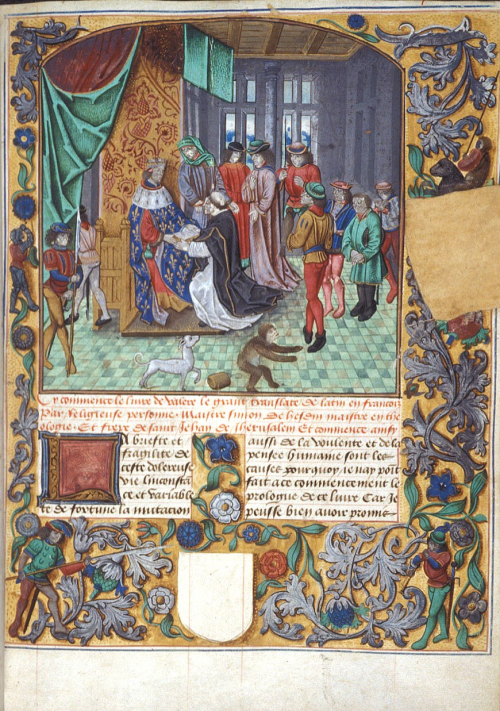 Valerius's work was also popular with medieval aristocrats, as evidenced by the number of highly illuminated copies made, with several in the British Library, some now bound in two or more volumes as they are so large. The following manuscripts have just been published in full on our Digitised Manuscripts website.

Other Valerius manuscripts have not been digitised in full but can be found online in our Catalogue of Illuminated Manuscripts with a selection of images: 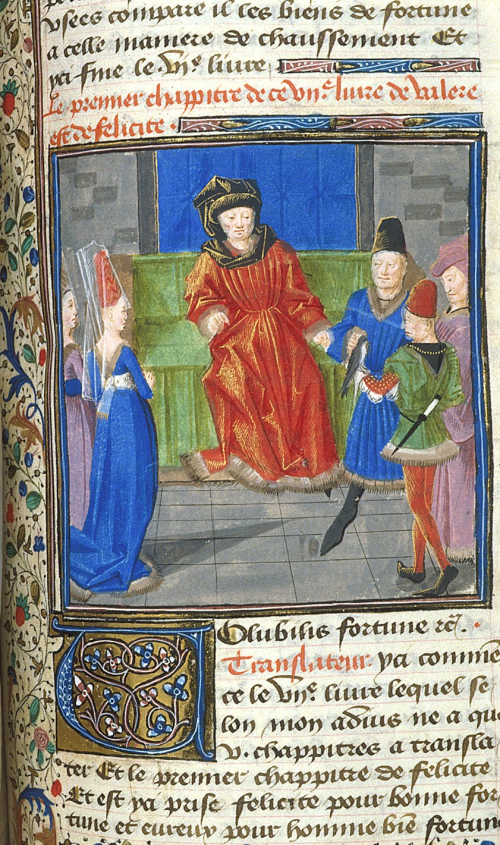