England and France, 700-1200: Manuscripts from the Bibliothèque nationale de France and the British Library

We are delighted to announce a new project to open up further the unparalleled collections of illuminated manuscripts held by the British Library and the Bibliothèque nationale de France. In a ground-breaking new collaborative project the national libraries of Britain and France will work together to create two innovative new websites that will make 800 manuscripts decorated before the year 1200 available freely. The Bibliothèque nationale de France will create a new bilingual website that will allow side-by-side comparison of 400 manuscripts from each collection, selected for their beauty and interest. The British Library will create a bilingual website intended for a general audience that will feature highlights from the most important of these manuscripts and articles commissioned by leading experts in the field. Both websites will be online by November 2018. 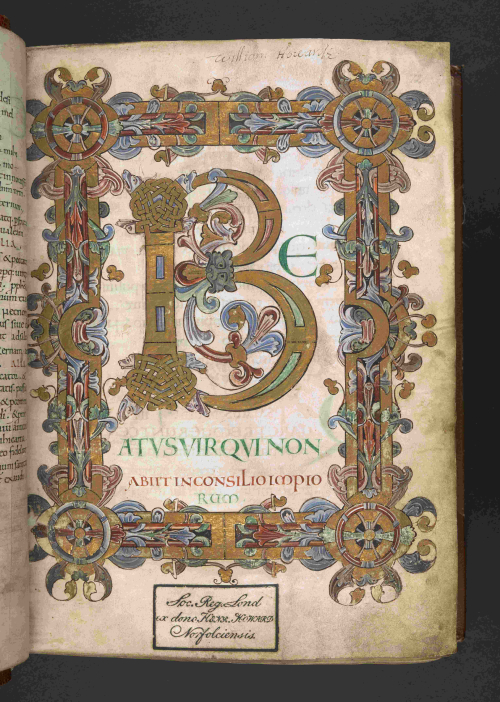 Before the introduction of printing to Europe, all books were written by hand as manuscripts. The most luxurious of these were illuminated, literally ‘lit up’ by decorations and pictures in brightly coloured pigments and burnished gold leaf. All manuscripts — whether they are luxurious biblical or liturgical manuscripts, copies of classical literature or patristic, theological, historical or scientific texts — are valuable historical documents that can deepen and expand our understanding of the political, social and cultural life of the eras in which they were made. Their research value is inestimable.

The British Library and the Bibliothèque nationale de France have two of the largest collections of medieval manuscripts in the world. As a result of France and England being so closely entwined through periods of war, conquest and alliance and, in the medieval period, both nations claiming territory in France at times, both libraries have particularly strong holdings of French manuscripts produced in France or in Britain (but written in French or Latin).

This new project will add to the growing numbers of manuscript material available in full online as part of wider programmes to make these cultural treasures available to everyone around the world. At the British Library, over 8,000 items are currently available on our Digitised Manuscripts website. Similarly, thousands of items are available from the Bibliothèque nationale de France collections on its website, Gallica. 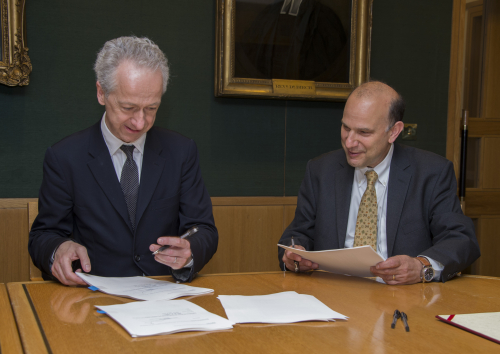 Roly Keating, Chief Executive of the British Library and Marc Polonsky of The Polonsky Foundation signing the agreement for the project.

This exciting project is made possible by a generous grant from The Polonsky Foundation. Dr Leonard Polonsky remarks that 'our Foundation is privileged to be supporting these two leading institutions in preserving the riches of the world's cultural heritage and making them available in innovative and creative ways, both to scholars and to a wider public'.

The Polonsky Foundation is a UK-registered charity which primarily supports cultural heritage, scholarship in the humanities and social sciences, and innovation in higher education and the arts. Its principal activities include the digitisation of significant collections at leading libraries (the British Library; the Bibliothèque nationale de France; the Bodleian Library, Oxford; Cambridge University Library; the New York Public Library; the Library of Congress; the Vatican Apostolic Library); support for Theatre for a New Audience at the Polonsky Shakespeare Center in Brooklyn, New York; and post-doctoral fellowships at The Polonsky Academy for the Advanced Study of the Humanities and Social Sciences at the Van Leer Jerusalem Institute. Its founder and chairman, Dr Leonard S. Polonsky, was named a Commander of the British Empire (CBE) for charitable services in 2013. 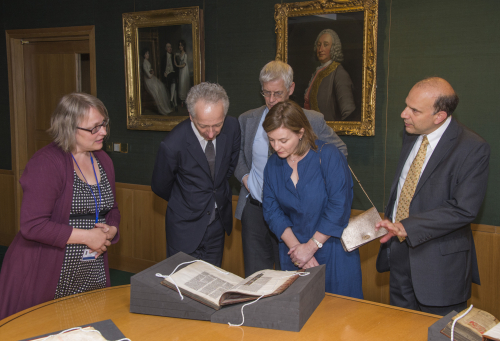 The focus of the digitisation project will be on manuscripts produced on either side of the English Channel between 700 and 1200. The manuscripts from this period open up a window on a time of close cultural and political exchange during which scribes moved and worked in what is now France, Normandy and England. Decorated manuscripts containing literary, historical, biblical and theological texts will be included, representing the mutual strengths of the British Library and the Bibliothèque nationale de France. Online access to these manuscripts will support new research into how manuscripts — and people — travelled around Europe in this period. New connections will be made possible by studying the two collections side by side.

For example, the manuscripts selected will include a number of illuminated Gospel-books, providing a witness to the changing tastes, influences and borrowings reflected in the books’ design and script. So a 9th-century, a 10th-century and a late 12th-century Gospel-book all have colourful illuminated initials with geometric patterns, floral decoration or animals heads, yet their execution is very different. The script, colours, style and subjects of the illumination all provide clues to the time and place of their composition. With the digitisation of manuscripts all these features may be studied and enjoyed in detail. 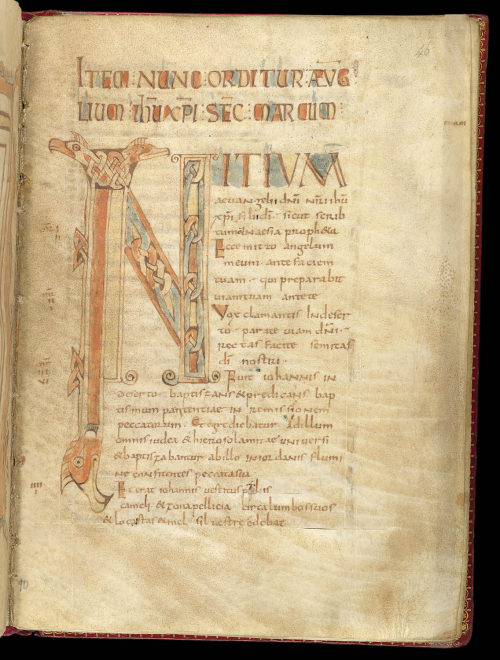 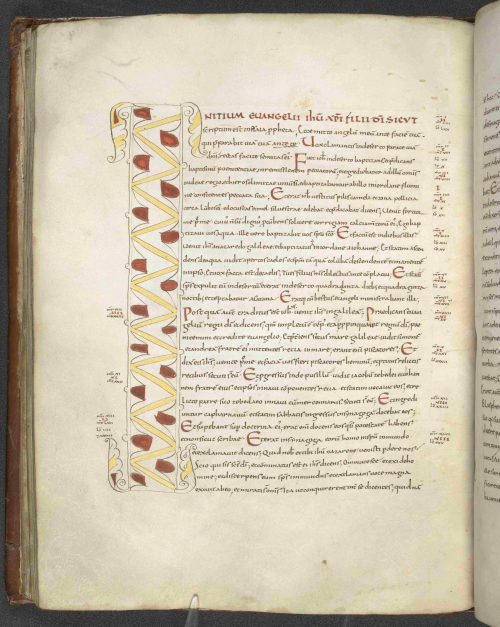 A book of Gospels from Thorney Abbey, originally produced in France, possibly Brittany, in the early 10th century, but which made its way to the abbey by the late 10th or early 11th century (British Library, Add MS 40000 f. 34v). 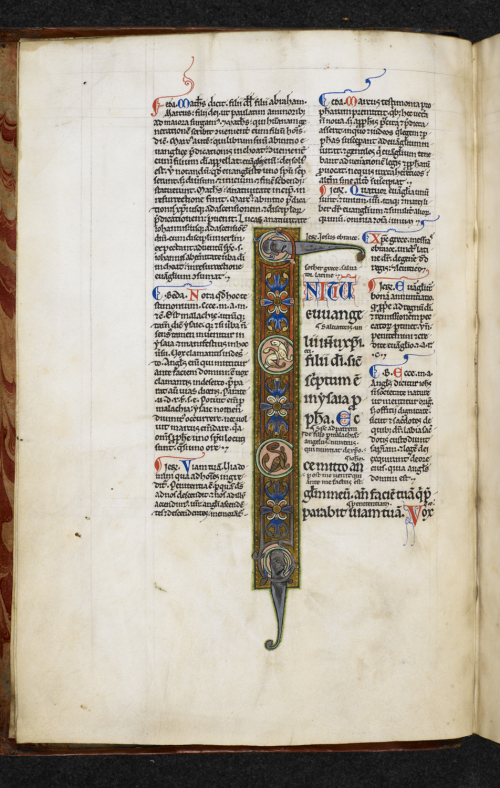 As well as making 800 manuscripts freely available online, the project will be part of a wider programme of activities aimed at researchers and the general public. A number of the manuscripts digitised will be displayed in a major international exhibition on Anglo-Saxon England to be held at the British Library from October 2018 to February 2019, which will highlight connections between Anglo-Saxon England and the Continent. Manuscripts included in the project may also feature in another major exhibition to be held at the Musée de Cluny in Paris focusing on Merovingian manuscripts, opening on 26 October 2016.

A conference at the British Library will coincide with the Anglo-Saxon exhibition (December 2018), and a project conference will be held at the Bibliothèque nationale de France. We will also produce an illustrated book showcasing beautiful and significant manuscripts from the collections. Another output will be a film on the digitisation project that, together with the other aspects of the public programme, will open up new paths into our collections for a variety of audiences.

We look forward to working closely with our colleagues at the Bibliothèque nationale de France on this exciting project to enhance access to and understanding of the written cultural heritage of England and France.

What does it mean that the manuscripts will be "free available online"? Can you provide details of access please? Particularly if images will be available for download?

All 800 manuscripts will be made accessible to view at the end of the project without charge in a new viewer which will support the International Image Interoperability Framework (IIIF). The new viewer has not been built yet but further details on its functionality will be published during the project.
Ancient, Medieval and Early Modern Manuscripts, The British Library