Lindisfarne Gospels: Back on Display in the Sir John Ritblat Treasures Gallery

We are delighted to announce that the Lindisfarne Gospels is now back on display in the Sir John Ritblat Treasures Gallery. 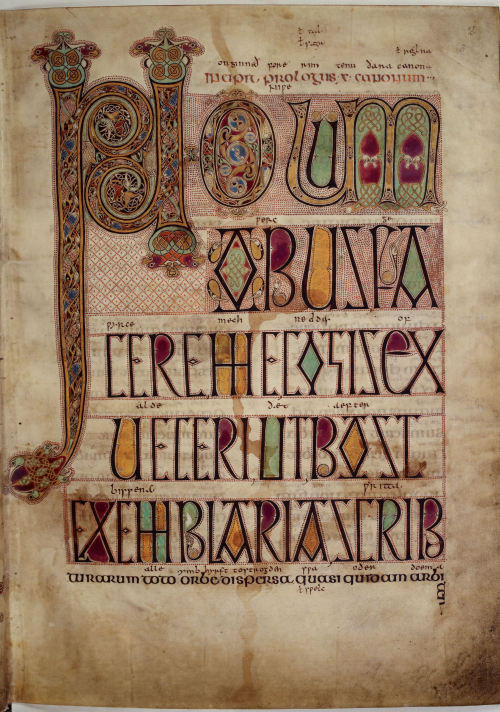 Decorated letters and words at the beginning of Jerome’s preface to the Gospels (Cotton MS Nero D IV, f. 3r)

Created around 700 on the island of Lindisfarne, the Lindisfarne Gospels is thought to be the work of a single artist and scribe, perhaps a monk called Eadfrith, who was bishop of Lindisfarne from 698 until his death in 722. In addition to the original Latin, the Lindisfarne Gospels includes the earliest known translation of the Bible in English. The Old English translation was added to the manuscript by a monk named Aldred, provost of the monastic community at Chester-le-Street, near Durham, in the 10th century. Aldred wrote the Old English version in small letters above each word of the original Latin.

On display now is part of a series of prefaces to the Gospels, featuring a letter written by Eusebius of Caesaria (d. 339) explaining the organisational tables he devised for the Gospels. These are known as the ‘Eusebian Canons’, which function as a system of cross-reference within the Gospels, and predate the division of the Bible into chapters. Each of the ten canons lists episodes, identified by section numbers, held in common by all four Gospels, or any combination of three, two and only one. In the Lindisfarne Gospels the word ‘Eusebius’ is highly stylised, with intertwined bird heads, and a crouching dog-like animal in the centre of the ‘E’. 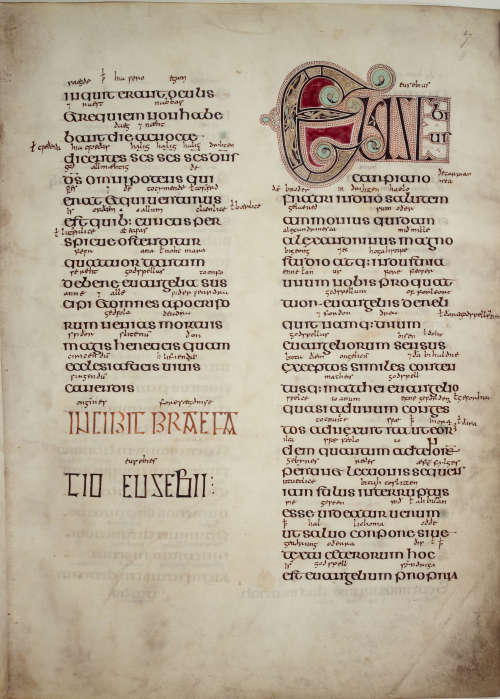 Prefatory material — explanations of specific translations, letters between theologians, or commentaries by Biblical scholars discussing religious theories, among others — is found in many medieval Bibles. For example, the Lindisfarne Gospels also includes a letter of St Jerome (c. 347–420) to Pope Damasus I (c. 305–384) describing his new translation of the Bible into Latin, which the pope had requested (see the image above). Jerome’s translation, known as the Vulgate, became the standard Latin version of the Bible and is still in use today as the Catholic Church’s official Latin Bible. Jerome’s letter to Damasus, titled the Novum opus (New Work), is a justification and explanation of his work, and can be found at the very beginning of the Lindisfarne Gospels.

The Sir John Ritblat Treasures Gallery is free to enter and open to all members of the public. It is open seven days a week. More information, including current opening hours, can be found here.