Reading and Writing Greek in Britain

The Greek language has a long history in the British Isles. The earliest surviving examples of Greek text found in Britain date from its days as a Roman province, on multi-lingual curse tablets now held by the Museum of London. Although located at the north-western extreme of the Roman Empire, Britain nonetheless saw its share of Greek-speaking soldiers and civilians living within its shores.

It is less clear what happened to any Greek-speakers remaining in Britain after the Romans withdrew around 410. However, by the 7th century, we have clear evidence once again of prominent Greek speakers on the island, when Theodore of Tarsus was appointed Archbishop of Canterbury. Few in the medieval Latin west could read Greek, but there is clear evidence from early on of an awareness of the importance of Greek as the original language of the Gospels, in particular. So, for instance, we can find Greek letters used occasionally in the Lindisfarne Gospels. At the incipit of the Gospel of Matthew, the word ‘Filii’  (‘son’) is written once with an F and once with a Greek letter Φ instead. 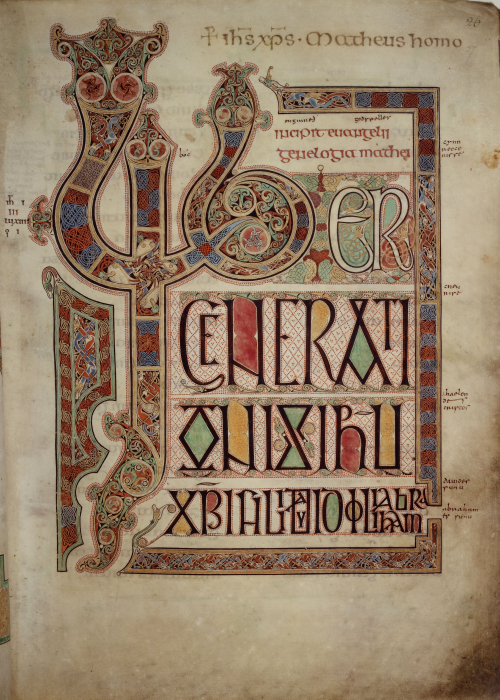 The incipit from the Gospel of Matthew in the Lindisfarne Gospels contains the Greek letter Φ in place of an F in the word ‘Filii’. Cotton MS Nero D IV, f. 27r. England (Lindisfarne Priory), c. 700.

The Athelstan Psalter, an Anglo-Saxon manuscript written in Francia and taken to England shortly afterwards, contains Greek prayers transliterated into Latin letters. These examples indicate that even if Greek was not widely understood, its significance as the language of the early Church was recognised by scholars and clergy in medieval Britain. More information about knowledge of Greek in the early medieval West can be found in an article on the British Library’s new Greek Manuscripts Project Website. 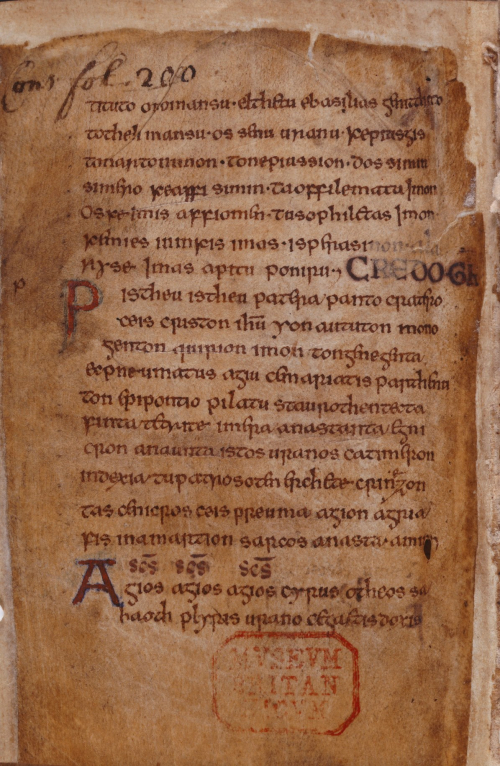 The revival of interest in Greek learning in the West during the Renaissance also had an impact on Britain. Schoolboy compositions in Greek written and presented to members of the royal family during the Tudor era are now kept at the British Library. These make it clear that Greek was being taught in some public schools, but as Matthew Adams shows in his article on this topic, its availability varied and depended on a number of factors. There was considerable suspicion of the Greek language in the early 16th century as a result of the appearance of Erasmus’ edition of the Greek New Testament, and the study of Greek was briefly associated with heresy. After the accession of Queen Elizabeth I (1558–1603), however, who was herself a keen student of Greek, the language regained favour and began to be taught more widely in schools. 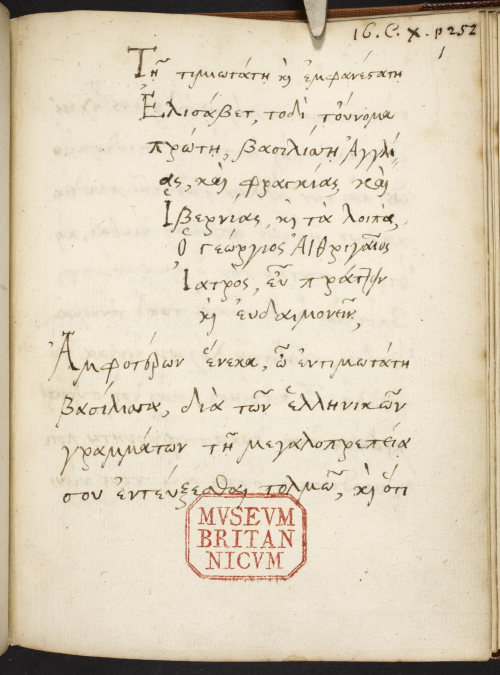 Over the following centuries, increasing interest in Greek in Britain saw the arrival on the island of many manuscripts and printed books in that language. Some notable figures whose collections are now in the British Library from this period include Hans Sloane and Robert Harley. But it was the 19th century, and the great increase in philhellenism resulting from the rise of the Grand Tour, sympathy for the Greek War of Independence, and other factors, that saw the most interest in Greek literature and Greek manuscripts in Britain. Many British aristocrats travelled to Greece and Greek monasteries in the Eastern Mediterranean, and returned with substantial collections of manuscripts. The acquisitions of some of these figures are detailed in an article on British collectors of Greek manuscripts.

These are only a few instances of the long history of knowledge of Greek in Britain. Many more can be found in our collection items, or in the articles to be found on our new Greek Manuscripts Project Website.