It has been a busy week of anniversaries of early medievalists with an interest in north-western Europe. Last week was the 950th anniversary of the Battle of Hastings. This week starts off with the anniversary of another conquest, as 18 October 2016 is exactly 1000 years after the Scandinavian leader Knútr (or Cnut or Canute) defeated Edmund Ironside at the battle of Assandun. While Edmund survived the battle, soon after he agreed to split his kingdom with Cnut, before dying on 30 November and allowing Cnut to take the rest of England into his Anglo-Scandinavian empire. 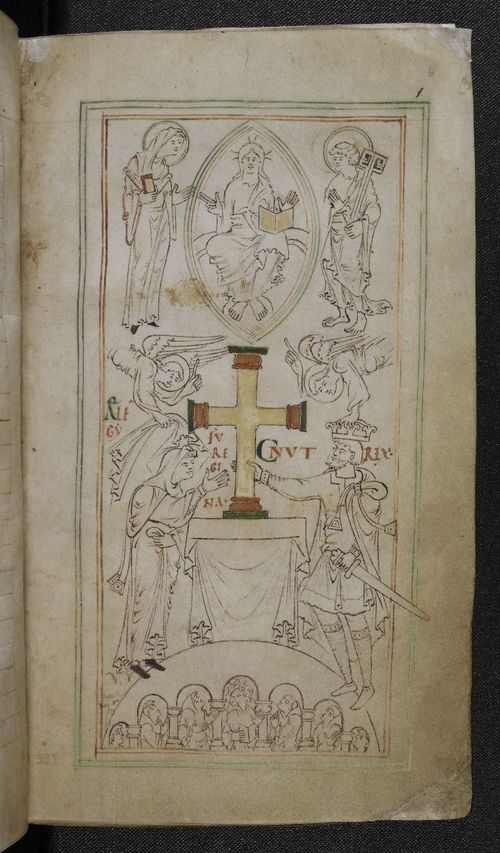 The only known manuscript portrait of Cnut and Emma made during Cnut’s lifetime, from the New Minster Liber Vitae, Winchester, c. 1031, Stowe MS 944, f. 6r

Assandun inspired fewer surviving sources than the Battle of Hastings and even less is known about it: in fact, there is some debate about exactly where Assandun was. The battle probably took place somewhere in Essex. Nevertheless, Cnut’s conquest and its aftermath did inspire a variety of interesting sources, from sagas to charters to an early account of a queen’s life. In fact, a whole case in the British Library’s Sir John Ritblatt Treasures Gallery is currently devoted to Cnut’s conquest and reign. So if you are in London any time soon, you can see one version of the Anglo-Saxon Chronicle’s account of the Battle of Assandun, with Edmund’s name in capitals, on display. 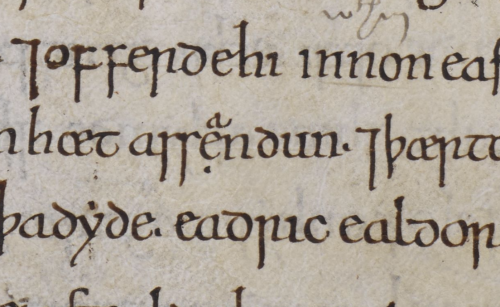 Detail of the account of the Battle of Assandun (spelled Asse(a)ndun), from the Anglo-Saxon Chronicle D, England, 11th century, Cotton MS Tiberius B IV, f. 67v

The battle itself still inspired dramatic literary retellings. 11th-century accounts describe Edmund being betrayed by the treacherous Eadric Streona (whom Cnut would later execute before he could turn on him as well), a lengthy period of fighting, and eventual flight by the English as night fell. One of the longest and most spectacular accounts of the Battle of Assandun, complete with invented speeches for leaders on both sides, comes from another manuscript, the Encomium Emmae Reginae (Add MS 33241), which has just been digitised as part of our newly announced project in partnership with the Bibliothèque nationale de France. 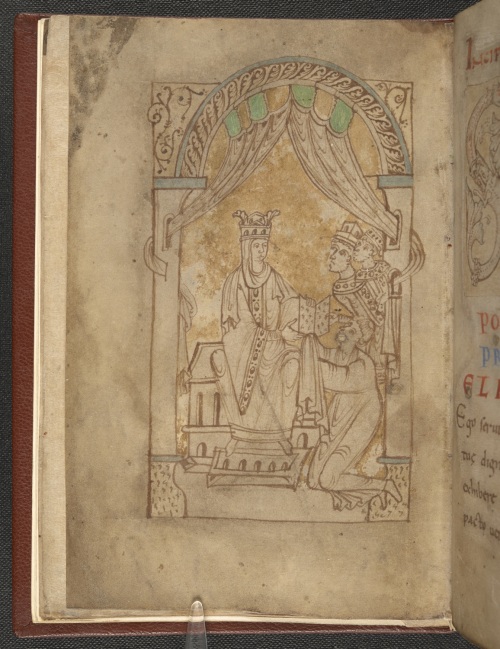 Opening miniature from the Encomium Emmae Reginae showing its writer presenting his work to Queen Emma with her sons looking on, England or France, c. 1040s, Add MS 33241, f. 1v

The Encomium Emmae Reginae is a rather extraordinary text among early medieval manuscripts from north-western Europe. It is a work of praise/propaganda about Emma and her husband Cnut, possibly aimed at disaffected nobles during the reign of her son Harthacnut. Emma (also known as Ymma and Ælfgifu) was a daughter of the count of Rouen: she became the second wife of Æthelred the Unready and in 1017 married the new ruler  of England, Cnut, also as his second wife. Emma may have helped Cnut navigate English politics, as Emily Butler and others have noted: her role was certainly remembered by whoever drafted a charter for Christ Church, Canterbury (also on display in the British Library's Treasures Gallery), which credits Emma with persuading Cnut to make a donation to Christ Church. Likewise, Cnut and Emma are both commemorated in the opening image of the New Minster Liber Vitae, making that image possibly the earliest contemporary manuscript portrait of a queen of England. By contrast, one of the models for that image, from the New Minster Refoundation Charter (Cotton MS Vespasian A VIII), only features the king, Edgar, even though his spouse is mentioned throughout the text. 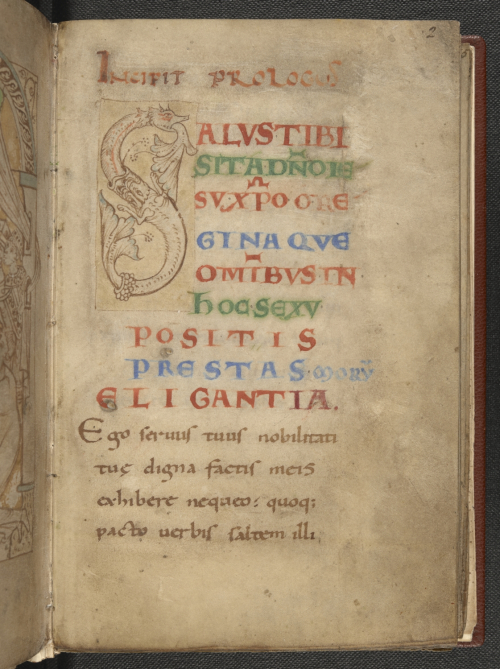 Emma’s strategical ability and priorities are hinted at in the text made for her. The Encomium Emmae Reginae commemorates Emma while also trying to exonerate her from any wrongdoing, especially concerning her children from her marriage to Æthelred. It was written by a monk of the monastery of St Bertin, in what is now Northern France, during the joint reign of her sons Harthacnut and Edward the Confessor. 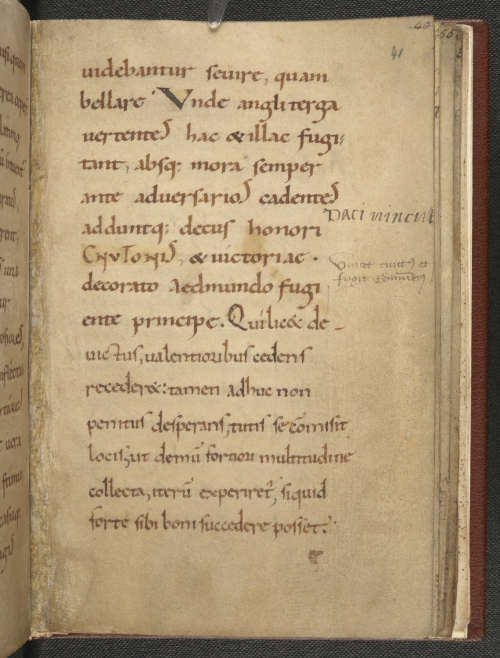 '[The Danes] seemed to rage rather than fight. Accordingly the English, turning their backs, fled without delay on all sides, ever falling before their foes, and added glory to the honour of Knutr...', from the Encomium Emmae Reginae, Add MS 33241, f. 41r  (trans. by A. Campbell, Encomium Emmae Reginae (Cambridge, 1998), p. 27)

The British Library’s manuscript of the Encomium Emmae Reginae can now be viewed online, thanks to the generosity of The Polonsky Foundation. The British Library’s copy was for a long time believed to be the only medieval copy in the world, but recently another, later medieval copy was discovered and is now held at the Royal Library in Copenhagen. This version has a different ending, perhaps changed when Edward the Confessor, Emma’s son from her first marriage, became sole king. Attempts to change texts remind us that while battles were important, they continued to be fought in texts and retellings long after. The Battle of Assandun was not an end, but the starting point for the writers of the texts currently preserved at the British Library. 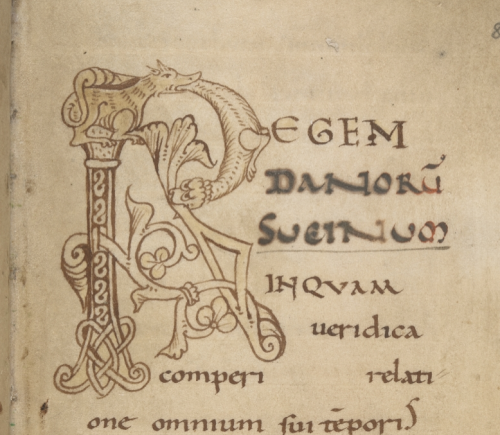