The Devil You Know

Whether you love it or loathe it, there's no way of avoiding that today is Halloween! Loyal readers of our Blog will have doubtless consulted our informative guide for the perfect costume inspired by illustrations in medieval manuscripts. However, those who favour a more traditional approach may have chosen from popular costumes such as a witch, vampire, ghost or devil. Among these, it is the modern image of the devil which is perhaps most indebted to medieval society. 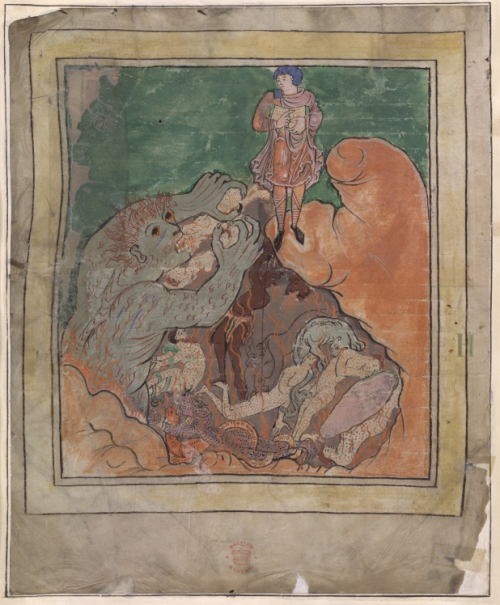 In the Middle Ages, Jews, Muslims and Christians all acknowledged the existence of the Devil in some form. The Devil was commonly depicted as a beastly figure representing sin, temptation and the embodiment of evil. In western European medieval manuscripts, the Devil was often attributed serpent-like features, such as pointed horns or ears and a long thin tail. These characteristics likely have their roots in the story of the fall of man in the Book of Genesis, and Eve's temptation by a serpent. 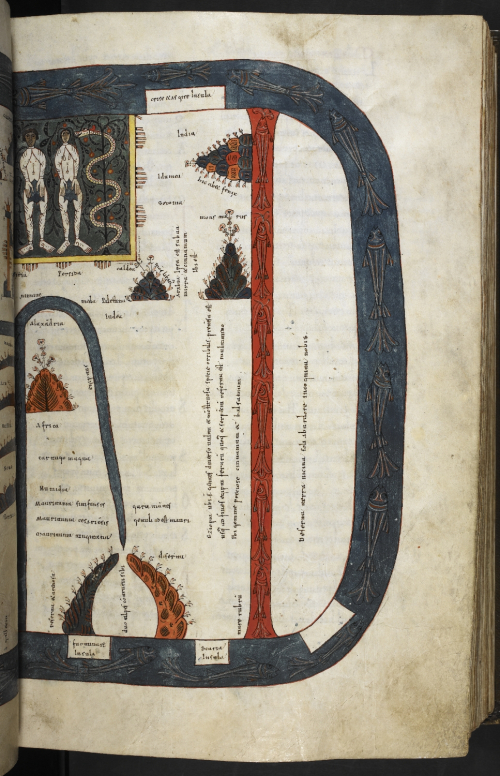 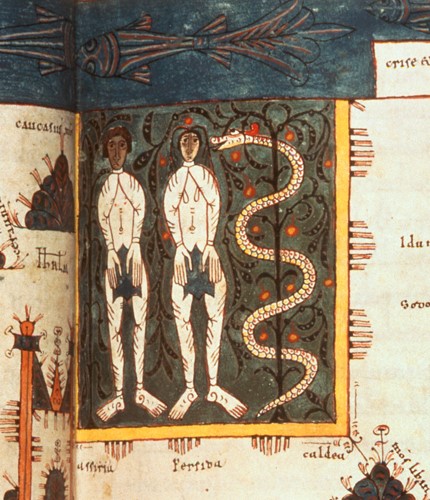 When the Devil appears in the New Testament, it is also in the guise of temptation. After his baptism, Christ fasted in the Judaean Desert for 40 days and 40 nights, during which he was tempted by the Devil. Christ managed to refuse each temptation and the Devil was thwarted. This scene is often depicted in illustrated Psalters, such as this 13th-century manuscript. This Devil’s horned head, spiked tail and cloven feet all bear sharp resemblance to features which we associate with devils today. 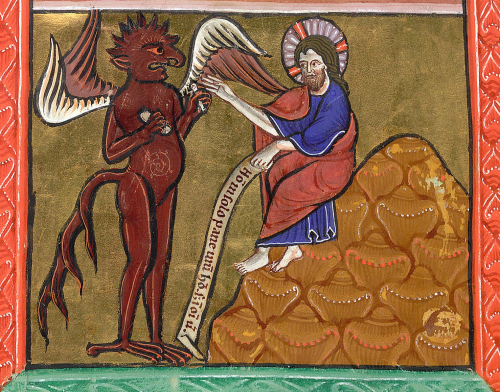 In medieval manuscripts, the Devil was often accompanied by an entourage of demons who shared a similar appearance to their master. It is possible to see smaller demons following the Devil in the image below, who is being chased away by a monk. The Devil and his demons represent the sin and temptation which the monks were seeking to avoid. Hopefully this aggressive method of resistance was a success for the monk! 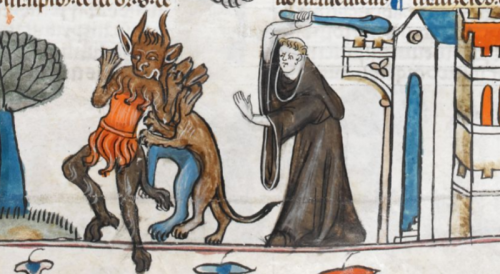 Although these devils share the horned and cloven footed appearance of the Devil in the illustration of the temptation of Christ, they also have marked differences. These devils are clearly brown instead of red, and they lack the fearsome wings and tail of the red devil. The image below depicts another example of this slightly cheeky and light-hearted Devil, who is giving orders to his minions. 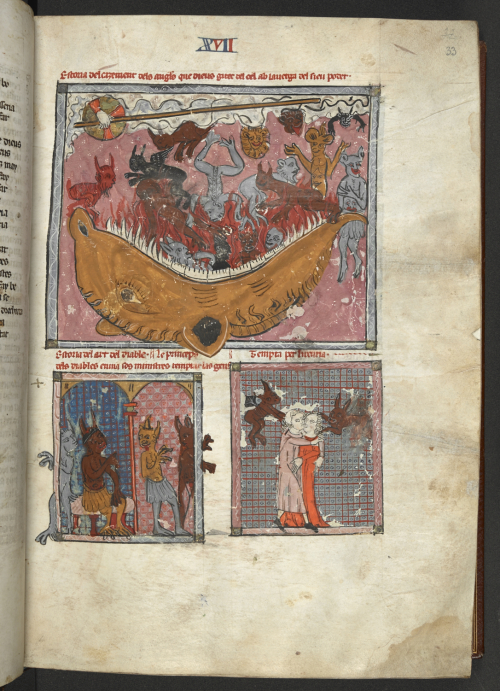 In the first part of Dante’s The Divine Comedy, Dante and Vergil arrive at the Gates of Hell and are greeted by the Devil. In illustrated manuscripts of the text, this Devil is portrayed in more serious fashion than the previous examples. The spiked wings, horns, tail and staff gave the Devil an extremely evil appearance, and prophesised the horrors which awaited Dante and Vergil as they descended further into Hell. 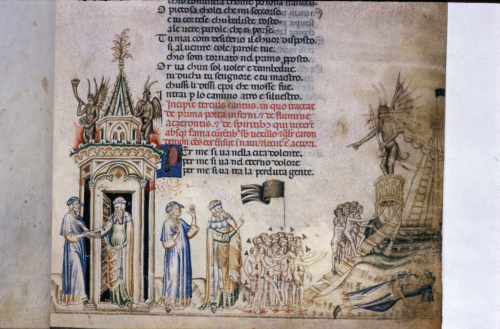 Detail of bas-de-page scene of Dante and Virgil entering the Gates of Hell (left); the lukewarm, stung by insects, holding a banner and Dante and Virgil (centre) addressed by Charon, portrayed as a winged Devil (above right); souls going up a gangplank and Dante lying in a faint, (right) from Canto 3 of the Inferno: Add MS 19587, f. 4r 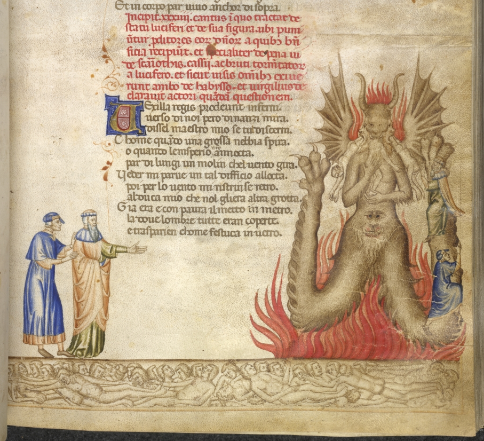 Bas-de-page scene of Dante and Virgil observing Satan swallowing his victims, with figures of those who betrayed their benefactors, such as Brutus and Judas Iscariot, frozen in ice below, from Canto 34 of the Inferno: Add MS 19587, f. 58r

Just as the devil was depicted in different ways in medieval manuscripts, so too was the entrance to Hell. Equally popular as the Gates of Hell found in Dante’s Divine Comedy was the Hell-mouth. Hell was often shown as a bottomless pit into which sinners were swallowed up through a great jaw. Although classical mythology contains tales of heroes falling into the jaws of monsters and failing to emerge, the significance of this trope in the medieval period lies in Scripture. 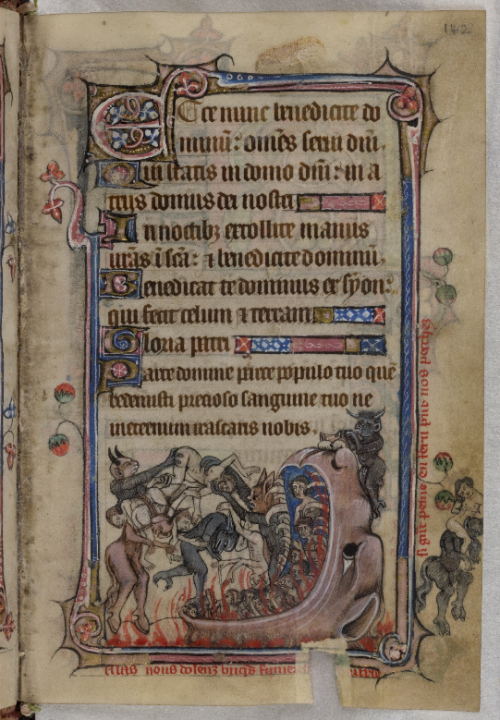 Detail of a bas-de-page scene showing the casting of souls into Hell: from the ‘Taymouth Hours’, Yates Thompson MS 13, f. 142r

The Hell-mouth represented the fusion of four main images: Hell as an open pit which swallowed sinners; Satan represented as a lion seeking souls to devour; Satan depicted as a dragon spouting flames; and Leviathan, the great sea beast from the Old Testament. To read and see more about depictions of the Hell-mouth, see our previous blogpost delightfully entitled, Prepare to Meet Your Doom. 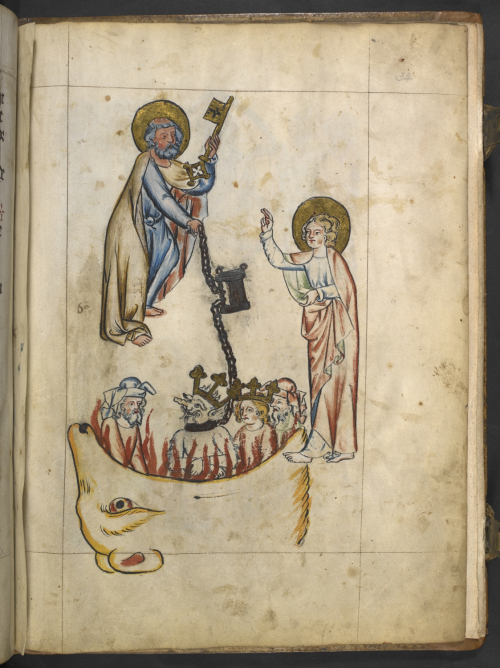 The Medieval Manuscripts team wishes everyone a Happy Halloween. Hopefully,  these images of terrifying (and sometimes cheeky) devils will inspire everyone to keep their frivolities safe and free of sin, lest you be swallowed up by a beastly Hell-mouth and condemned to an eternity of torments!