Last year we advertised the opportunity for an Arts and Humanities Research Council (AHRC) Collaborative Doctoral Partnership on the theme of ‘Understanding the Anglo-Saxons: the English and Continental Manuscript Evidence’. We welcomed Becky Lawton to the Ancient, Medieval and Early Modern Manuscripts section, who was chosen as the award-holder, working under the supervision of Dr Claire Breay, Head of the section at the British Library, and Joanna Story, Professor of Early Medieval History at the University of Leicester. You may have seen some of Becky’s popular blog posts, including The Great Medieval Bake Off and The Ceolfrith Leaves Are 1300 Years Old. 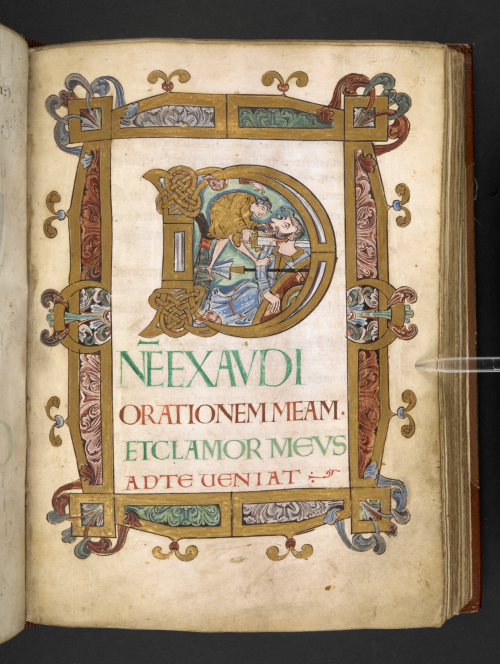 The Eadui Psalter, SE England (Christ Church, Canterbury, 1st half of the 11th century), digitised thanks to a generous grant from The Polonsky Foundation: Arundel MS 155, f. 93r.

This year we are delighted to announce another studentship on the theme of England and France: Manuscripts 700-1200, to be co-supervised by Dr Kathleen Doyle, Lead Curator, Illuminated Manuscripts. This doctoral research project would focus on an aspect of pre-1200 manuscript culture, using manuscripts from the collections of the Library and of the Bibliothèque nationale de France (BnF). The research will be facilitated through the work of a related collaborative project with the BnF, England and France: Illuminated Manuscripts 700-1200, which will digitise in full 400 manuscripts from each institution, which we announced on 12 October. This project is funded externally by The Polonsky Foundation.

The AHRC Collaborative Doctoral Partnerships scheme has been running for four years and the British Library is now advertising a call for partnership, for a fifth round of awards to begin in October 2017. Researchers of postdoctoral standing at UK universities are invited to submit proposals to serve as the academic supervisor of this studentship. Full details of our research theme for this partnership, and some suggested areas of study and research questions, can be found here.

The concurrent Polonsky-funded England and France project will provide digital coverage of 800 pre-1200 manuscripts, many of which may form part of the student’s research corpus. The student will benefit from the expertise of the curatorial team that will be cataloguing and interpreting these manuscripts for a general and academic audience. The student will have access to these detailed descriptions as well as internal databases, and as a result will be able to focus on (and create) particular areas of interest using the resources already provided. Both the British Library and the BnF have extensive cultural engagement programmes and the PhD student will have opportunities to contribute to this activity. The project also brings opportunities to engage actively with the interpretative website that will be developed for the Polonsky-funded England and France project, including contributing to online articles and blogposts on the relevant manuscripts. 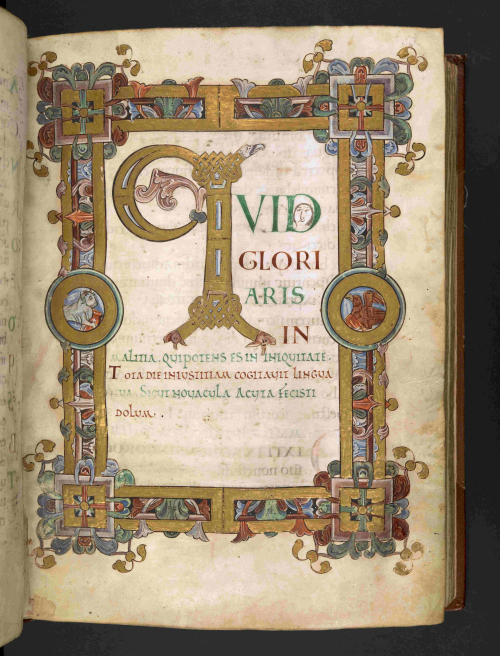 The Eadui Psalter, SE England (Christ Church, Canterbury, 1st half of the 11th century), digitised thanks to a generous grant from The Polonsky Foundation: Arundel MS 155, f. 53r.

The selected university partner will receive an AHRC training grant to cover the student’s fees and stipend, including a Research Training Support Grant and Student Development Funding (standard RCUK eligibility criteria apply). The Library will provide the students with staff-level access to its collections, expertise and facilities, as well as financial support for research-related costs of up to £1,000 a year. The student will also benefit from the dedicated programme of professional development events delivered by the Library in tandem with the other museums, galleries and heritage organisations affiliated to the CDP scheme.

So, if you are based in a UK Higher Education Institution and would like to co-supervise an AHRC-funded doctoral student on this research theme, or one of the other three themes selected for next year, apply by 25 November 2016. For any queries about how to apply or to find out more about the Library CDP programme, please email Research.Development@bl.uk.