It's a bird, it's a plane, it's supermonk

While working on the early medieval manuscripts at the British Library, I can’t help notice the sophistication and vision of the people who lived over 1000 years ago. They certainly had different worldviews and priorities from people living today; but I’m constantly surprised by the ambition of some of their inventions and ideas. For example, did you know that the first recorded pioneer of man-powered flight in the British Isles was an Anglo-Saxon monk from Malmesbury Abbey called Eilmer (or in Old English, Æthelmaer) who lived between about 980 and 1070? 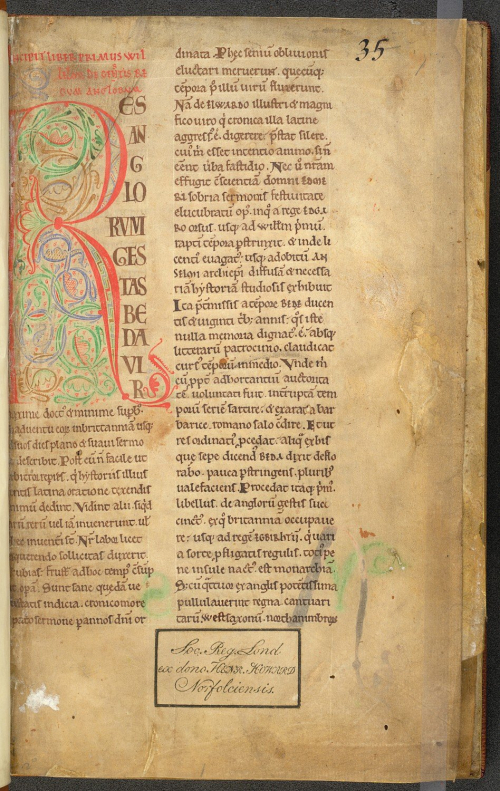 Eilmer’s life is recounted in the Deeds of the Kings of England by William of Malmesbury; indeed, William may have met him when Eilmer was an old man. According to William, many years earlier Eilmer had attached wings to his hands and his feet and jumped from a tower, travelling at least a ‘stadium’ (possibly 200 metres or 600 feet), before being caught by turbulence and breaking both his legs. Eilmer later claimed his error was not fitting a tail to himself, as well as wings. For comparison, the Wright Brothers’ first flight covered about 120 feet. 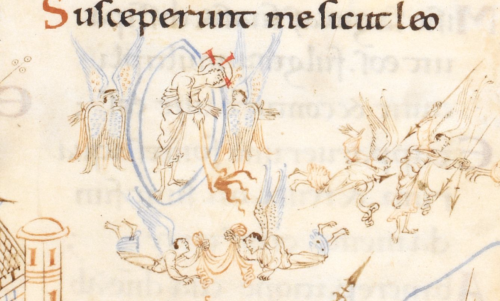 We have no evidence of what Eilmer’s wings looked like, but some contemporary artists depicted humanoid angels with wings, sometimes flying or floating: the Harley Psalter, Harley MS 603, f. 9r. Christ Church, Canterbury, 11th century.

Eilmer was probably born in the 980s and died after 1066, so his flight probably took place in the 1000s or 1010s. We can guess Eilmer’s lifespan because William of Malmesbury claimed Eilmer had seen Halley’s Comet twice, in 1066 and presumably in 989. Comets were associated with political upheaval, and William dramatically described how, upon seeing the comet in 1066, Eilmer became very upset and prophesied the Norman Conquest:

‘Crouching in terror at the sight of the gleaming star, "You've come, have you?" he said. "You've come, you source of tears to many mothers. It is long since I saw you; but as I see you now you are much more terrible, for I see you brandishing the downfall of my country."’ (William of Malmesbury, Gesta Regum, chapter 225, translated by R.A.B. Mynors and others (London: The Folio Society, 2014), p. 248.)

Although 1000 or 1010 is an early date for man-powered flight, Eilmer was not the first human to attempt to fly. The 14th-century writer al-Makkari claimed that the 9th-century Andalusian scholar Abbas ibn Firnas also tried to fly, and also attributed his failure to forgetting to build a tail. Eilmer and Firnas were in good company in this respect: modern reconstructions of Leonardo da Vinci's design for a gilder also failed until a tail was added. Other medieval aviators included the scholar and dictionary-writer al-Jawhari, who reportedly died while trying to fly from the roof of a mosque in Nishapur in what is modern-day Iran in 1003 or 1008. There are even earlier stories about people flying or gliding in China, Ancient Greece and Rome.

Like many of these other early pioneers of flight, Eilmer was also a scholar. Sadly, none of his own writings survive to the present day. However, on Digitised Manuscripts you can see one manuscript which Eilmer himself may have read: an Old English copy of the Gospels (Cotton MS Otho C I/1). This manuscript seems to have been owned at Malmesbury Abbey by the mid-11th century, when an Old English translation of a papal decree relating to Malmesbury was added between the gospels of Luke and John. 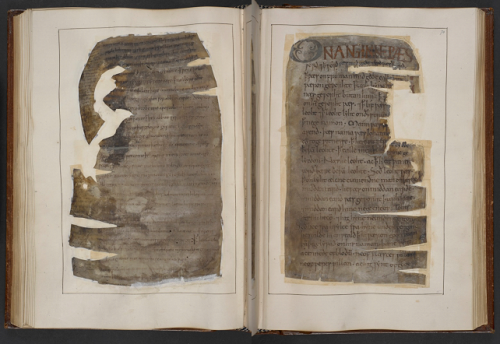 Other monks at Malmesbury do not seem to have been amused by Eilmer’s experiments and inventions. Although William of Malmesbury generally respected Eilmer, he chided him for thinking that the ‘fable’ of the Greek inventor Daedalus flying was actually real. Even today, the ‘Birdman of Bognor’ competition for individual flying contraptions features contestants who, for the most part, lampoon the idea of individual flight. Eilmer was not the last human to try to fly, however. His story inspired thinkers from Roger Bacon to John Milton to the 19th-century ornithologist John Wise to 20th-century French scholars. Today, you can see airplanes in the sky above Malmesbury Abbey, some perhaps passing over the exact same stretch where Eilmer first glided.