Some of the British Library’s most precious manuscripts are those containing beautiful miniatures from the Byzantine world. The majority of these manuscripts are religious in focus, usually Gospels or Psalters, reflecting the central role played by Christianity in the Byzantine Empire. The Byzantine court functioned as a theocracy, in which the Emperor was seen as God’s representative on earth, acting with divine authority. Religion infused every aspect of Byzantine life, including book production.

Although it is difficult (and somewhat artificial) to distinguish between late antique and early Byzantine art, a useful starting-point is the splendid Golden Canon Tables. Created in Constantinople in the 6th or 7th century, the manuscript is covered in gold paint, over which the Canon Tables (used to identify parallel passages between the four Gospels in biblical manuscripts) were written, and adorned with floral decoration and small medallions containing portraits of four men. Although they survive only as fragments, they would originally have formed part of an incredibly lavish copy of the Gospels, a testament to the importance of the Bible for the inhabitants of Constantinople at this time. 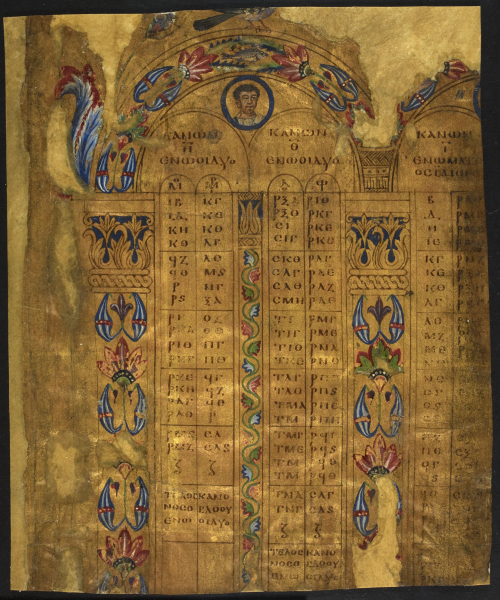 The Iconoclastic period (726–842 CE) saw the destruction of many existing works of religious art, and a ban on the production of any new works of art. The prohibition on graven images in the Bible was a source of concern for Christian thinkers in late antiquity and early Byzantium, who worried about the propriety of producing depictions of Jesus and other holy figures. This concern was particularly felt in Byzantium owing to the particular emphasis placed on icons in religious worship there (an emphasis that is still found in the Greek Orthodox tradition today). The impact of iconoclasm has meant that relatively few examples of early Byzantine illumination survive, and those that do, like the Golden Canon Tables, are thus even more precious to us today. 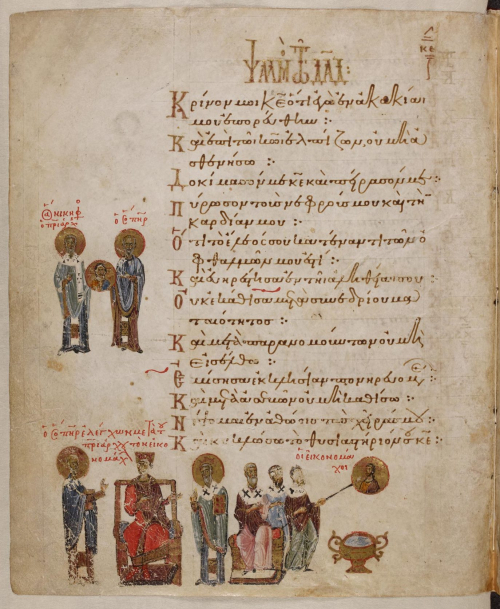 After the prohibition on the production of religious art was lifted for the final time in 842, we see the reappearance of illuminated Biblical manuscripts. A number of illuminated Psalters (discussed in more detail in an article by Kalliroe Linardou) actually include images of iconoclasts erasing icons of Jesus. Such images can be found in the Theodore Psalter. On occasion, later owners of the manuscripts have erased the faces of the iconoclasts themselves!

A great emphasis was placed on tradition in Byzantine art. This is why, for instance, there is such great similarity between portraits of the Evangelists in Gospel manuscripts. Yet this stress on tradition also provided an opportunity for artists to distinguish themselves in more subtle ways, and there is clear variation in Byzantine illumination across the Greek-speaking world, as Elisabeth Yota shows in her article on provincial manuscript illumination. Some Greek manuscripts were illuminated by artists from different traditions, as is the case with Harley 5647, in which the portraits were made by a Syriac artist. Comparison of this with, for instance, the portraits in the Guest-Coutts New Testament, show both the strong tradition in terms of how figures are depicted and the room for innovation that was possible. Further examples can be found in Kathleen Maxwell’s article on illuminated Gospel manuscripts. There are more fantastic illuminated Greek manuscripts than we can possibly hope to talk about in a single blog post, so we invite you to explore the collections and articles available on our Greek Manuscripts Project Website, and the many manuscripts available on Digitised Manuscripts!

Posted by Ancient, Medieval, and Early Modern Manuscripts at 8:43 AM