Throughout the Middle Ages, Christmas was a season of festivities and celebrations, just as it is today. 25 December was certainly a high point of this festive season, beginning the twelve days of Christmas which would last until Epiphany. On three occasions in the early medieval period, the Christmas Day celebrations may have been more extravagant than usual: on Christmas Day in 800, 855 and 1066, merrymakers also celebrated the coronations of the very first Holy Roman Emperor and two English kings with interesting legacies. 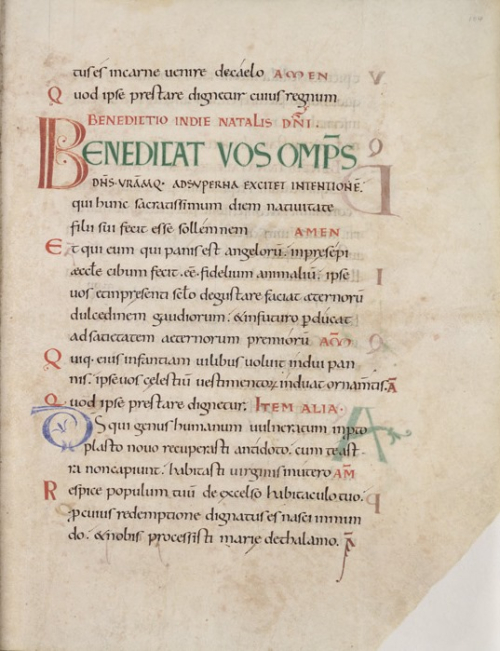 On Christmas Day in the year 800, Charlemagne, King of the Franks, was crowned Holy Roman Emperor in the city of Rome. This was a momentous occasion in the Christian West, where Imperial authority had ceased to be acknowledged after the fall of the last Emperor of the Western Roman Empire in AD 476. By the end of the 8th century, Charlemagne’s military success had left in him control of a large part of medieval Europe and he had acquired a special relationship with the Pope. By crowning Charlemagne as the first Holy Roman Emperor, Pope Leo III was acknowledging Charlemagne’s secular authority and his role as defender of the Christian faith throughout Western Christendom.

Another early medieval king to have supposedly been crowned on Christmas day is King Edmund of East Anglia, who reigned from 855 until his death in 869. Very little is known about Edmund'ss early life, as no contemporary written records survive from his reign. The first-known record focuses more on the circumstances of Edmund's death than his achievements in life. The ‘Anglo-Saxon Chronicle’ described how Edmund was killed by the Great Heathen Army of Danes which had recently attacked other parts of Anglo-Saxon England. This is the same Great Heathen Army which was fought off by Alfred the Great of Wessex over the next decade. 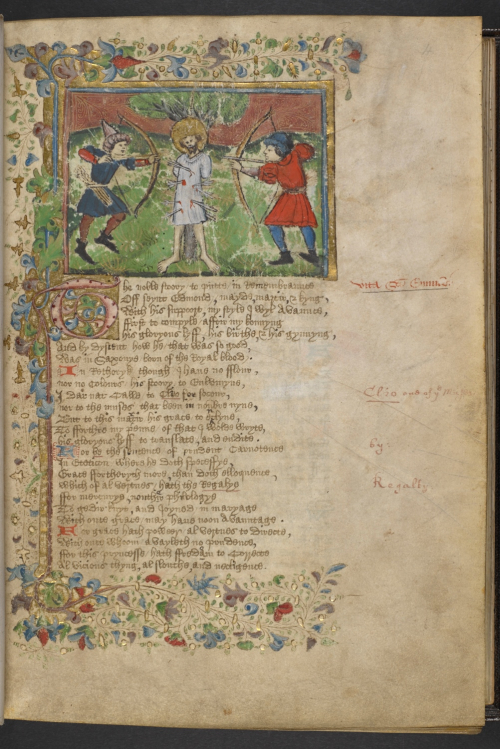 Miniature of Edmund tied to a tree and being shot full of arrows by two Scandinavians: British Library Harley MS 4826, f. 4r.

According to tradition, Edmund died during battle with the Danes after he refused their demands to renounce his Christian faith. This refusal transformed Edmund into a martyr. Over the following two centuries, a popular cult developed around his memory and was centred on the church where his remains were buried. The town which grew around this church was so associated with the cult of St Edmund that it took on his name, becoming the modern-day  Bury St Edmunds in Suffolk. In the 10th century, the monks of Ramsey Abbey commissioned Abbo of Fleury to write a Latin account of the saint’s life and early cult. This text was later translated into Old English by the Anglo-Saxon, Ælfric of Eynsham, a well-known writer of many old English saint’s Lives, homilies and biblical commentaries. Much of what is now known about Edmund's early life, including his coronation on Christmas Day, comes from these texts written up to 200 years after his death. It is therefore uncertain where Edmund was indeed crowned on Christmas Day, or whether his later hagiographers deemed this an appropriate date for the coronation of a king who would later be canonised. 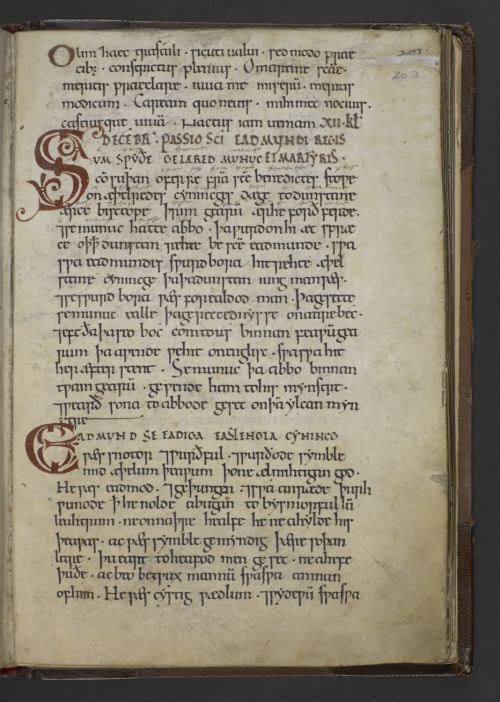 The crowning glory in our series of early medieval Christmas coronations is that of William the Conqueror, who was crowned King of England in Westminster Abbey on Christmas Day in 1066. William’s coronation marked the end of Anglo-Saxon rule in England, and the beginning of the Norman dynasty. 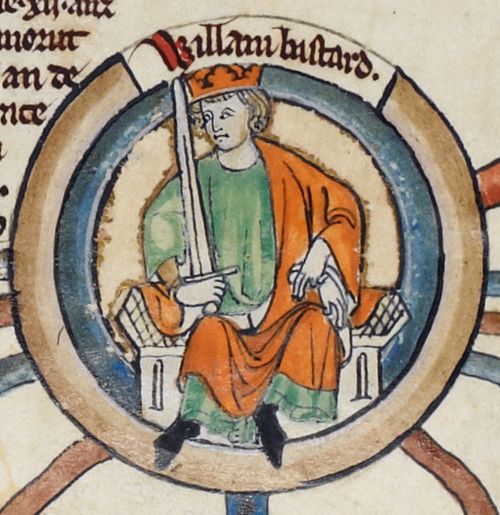 Detail of a roundel of William the Conqueror ('William Bastard'), from a genealogical chronicle of the kings of England, England (East Anglia?), c. 1340–1342: British Library Royal MS 14 B VI, membrane 5.

After his coronation, William set about establishing his authority in his new kingdom. As part of this process, he commissioned an abbey to be built upon the site of the Battle of Hastings. According to 12th-century sources, before the battle, William had sworn to build the abbey in order to commemorate and pray for those who died in combat. A detailed account of this foundation story was written at Battle in the 12th century. The page below is the beginning of an account of the life of William the Conqueror, and depicts William enthroned. 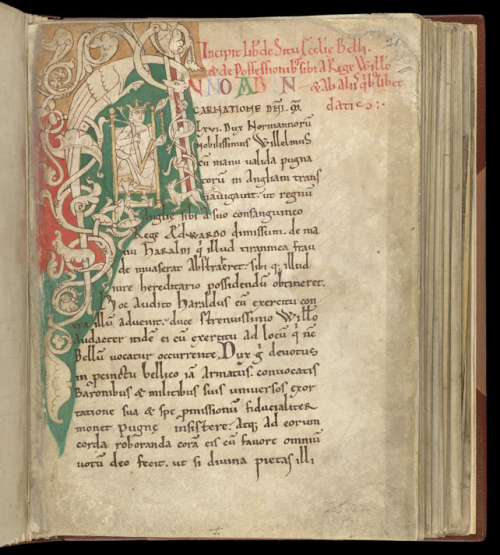 It is extremely likely that these kings, or the people who wrote their legends, consciously chose to the crowned on Christmas Day. Those who celebrated their coronations on 25 December would also be celebrating the birth of Christ, the saviour and King of Kings. This would have added a sense of Divine favour to their rule, and secured their claim to that particular title. The sacred significance of this would not have been lost on the audience of these ceremonies, those who recorded them, and those who read about them throughout history.