Anyone wanting to rethink Christmas in the face of today’s relentless commercialisation might look to the past for inspiration. People in the Middle Ages took Christmas much more seriously than some of us do today: the four weeks before 25 December, called Advent, were not focused on shopping and awkward office parties, but prayer and fasting (a less rigorous version of Lent). They also knew how to enjoy themselves more thoroughly: Christmas starts on 25 December, and lasts for 12 full days. If you’re curious about what this might have involved, we have new inspiration in one of the first cookbooks written in English, Forme of Cury. Its oldest complete copy, Add MS 5016, is now available on our Digitised Manuscripts site. Forme of Cury might sound as if it is promoting the wonders of Indian food in the 14th century, but this phrase might more accurately be translated Method of Cookery in modern English. It was likely written around 1390. The title comes from a preface explaining that it was assembled by the ‘chief master cooks of King Richard the Second’, who reigned in England from 1377 to 1399. The author explains that the book itself was intended as a means of instruction:

First it teacheth a man for to make common pottages and common meats for household as they should be made — craftily and wholesomely. Afterward it teacheth for to make curious pottages and meats and subtleties for all manner of states, both high and low. And the teaching of the form of making of pottages and of meats, both of flesh and of fish, both set here by number and by order; so this little table here showing will teach a man, without tarrying, to find what meat that him lust for to have.

Archaic language aside (a ‘pottage’ is a soup or stew), this might sound surprisingly modern to our ears, perhaps the beginnings of democratic cooking. But the book’s notion of ‘subtleties’ shows that it was hardly aimed at beginners. The chefs of aristocrats loved to make contrivances that displayed food in unusual ways: they might use sugar, jelly or wax to confect models of buildings, ships or eagles. Some foods might be disguised as something else, such as meat that appeared outwardly to be fruit. This was not so much a replacement of a teacher as an aide-memoire. Do-it-yourself handbooks were still in their infancy, and did not fully come into their own until after the introduction of printing. 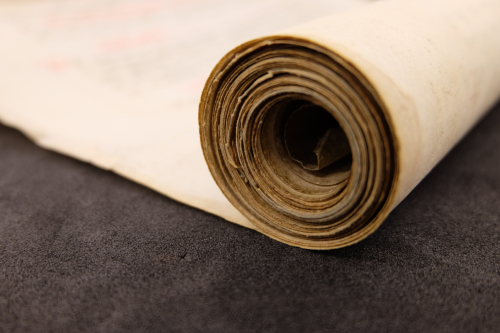 The book is written in what might now strike us as an odd format: a scroll, as opposed to a folded codex, as the vast majority of our books now come. Not all copies of The Forme of Cury are in this form, but it seems likely that this was its original conception. We can only speculate on why this was done; one theory is that it shows it was conceived as something of a record of the king’s kitchen, similar to the pipe rolls, used in England between the 12th and 19th centuries for keeping the annual records of the Exchequer.

The combination of the book’s age, royal origins and unusual format have made it one of the first stops in research on medieval cookery. It was the subject of an entire BBC documentary, ‘Clarissa and the King’s Cookbook’. It also featured in our recent Treasures of the British Library series. The ingredients used in its recipes do not disappoint: it is the first work of cookery in English to mention modern staples such as olive oil, cloves and mace. There are also many spices that would in its day have been incredibly valuable, such as nutmeg or ginger, but today are widely available. 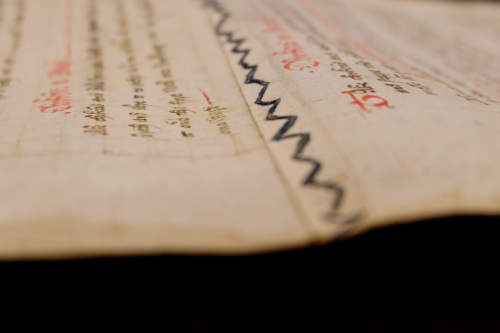 Blue stitching joining the membranes of the Forme of Cury scroll, Add MS 5016.

Which of the 196 recipes in Forme of Cury should one begin with? The British Library's own Polly Russell met with London chef Ashley Palmer-Watts in 2013 to look at the book and consider how its recipes might work on today’s Christmas menu. They developed a modern version of frumenty. Many other reworkings of its recipes can be found in print and online. Pygges in sawse sawge, anyone, or perhaps cold brewet?