Seemingly every day, new evidence comes to light of the extent of international connections in the Middle Ages. For example, the British Museum recently published the discovery of Middle Eastern bitumen used at the Anglo-Saxon Sutton Hoo burial. How, then, did these movements occur, and what were their effects? The Institut du monde arabe in Paris is giving a unique opportunity to explore these questions with their exhibition entitled ‘Ocean Explorers from Sindbad to Marco Polo’ (‘Aventuriers des mers de Sindbad à Marco Polo’), running from 15 November 2016 until 26 February 2017. The British Library is delighted to have loaned two of our manuscripts for this exhibition. 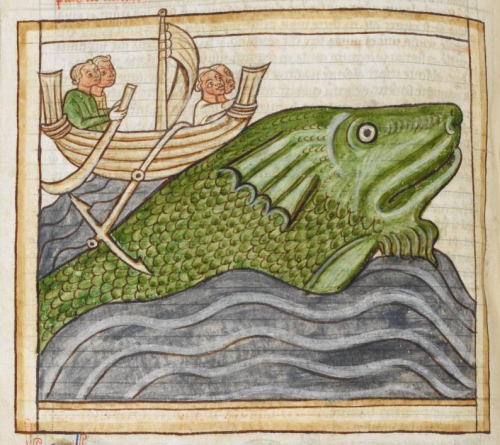 If there is anything that everyone understands about medieval sailing, it is that it was incredibly dangerous. The only means of navigation was the sky until the magnetic compass was imported from the Arabic world, which was first recorded in the West in the 1180s by Alexander Neckam, then a teacher in St Albans. Shipwrecks were inevitable. One of the popular methods of depicting of a whale, symbolizing the uncertainties of the sea, showed a ship that had accidentally landed on its back, with its crew lighting a fire. This story is most famously told in the Voyage of St Brendan. Every year over the course of their seven-year voyage, his crew moored on the back of a whale named Jasconius to celebrate Easter. The whale in Harley MS 3244, an English bestiary from the 13th century, is a particularly vivid example of this motif.

Also starring in the exhibit is Cotton MS Tiberius D IX, the Itinerary of the Red Sea (Roteiro do Mar Roxo) by João de Castro. It includes a beautiful series of coloured maps, notably showing ships with many different types of sails, underlining their varied origins. Our manuscripts are shown alongside many other artefacts showing the influence of travel on pre-modern culture, from both the Middle East and Europe. In case you need yet another excuse to travel to Paris, now you have it.

Posted by Ancient, Medieval, and Early Modern Manuscripts at 9:03 AM