A Calendar for January 2017

Every year we feature a different calendar on the Medieval Manuscripts Blog. This year is no exception: the seventh calendar in our series is the fabulous Additional MS 36684, a Book of Hours of the Use of Saint-Omer. This Book of Hours is a delightfully unique manuscript (as explored in our previous blogposts: Apes Pulling Shapes and Something for Everyone), sure to see us through 2017 in style.  It is quite different to last year’s Bedford Hours and we’re looking forward to highlighting the amusingly idiosyncratic decorative elements in the calendar. You can read more about calendars in general in our introduction to our first calendar of the year, back in 2011. 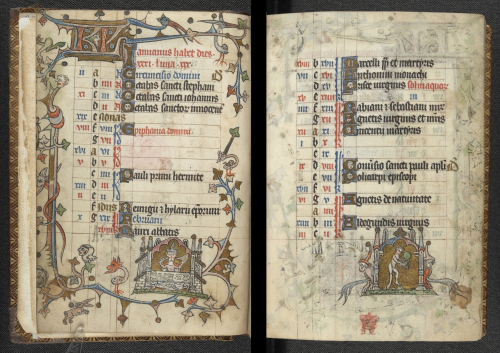 Additional MS 36684 was created in approximately 1320 in north west France, most likely in Saint-Omer or Thérouanne. We know that the manuscript was probably made in this area because of entries in the calendar, which often included the feast days of local saints. In this case, the calendar displays the dedication of St Omer (‘Sancti audomari') on his feast day, 17 October.

This Book of Hours is distinctive for its imaginative decoration, which is extremely diverse; there are hardly any repeated figures, and hybrid animal-humans and fantastic beasts adorn the decorative borders on each folio. The human figures are particularly distinctive for the bright orangey-pink painted circles on their cheeks and marking their mouths. 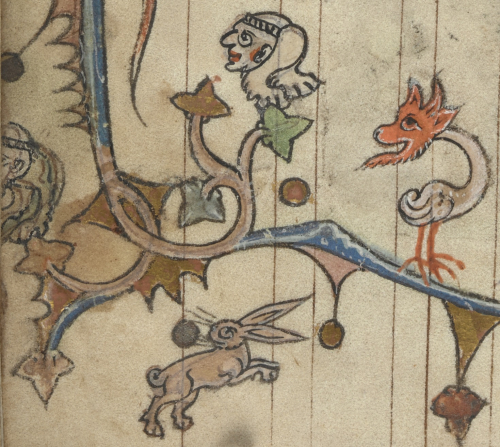 The calendar is placed at the beginning of the manuscript, taking up the first thirteen folios. Each month is given two folios: the verso of one and the recto of the next. Both are highly decorated, with a border incorporating creative beasts and creatures and two different miniatures, one displaying the zodiac sign and the other the labour of the month, which is the seasonal activity associated with that month. Every month begins with a large gilded double-initial ‘KL’, for ‘Kalendarius’.

The folios for January, which fall on f. 1 verso and f. 2 recto, begin with the entries of saints, and there are even small faces drawn into the gilded letters at the start of some of the names.

The illustration of January’s labour of the month depicts the typical activity of feasting, but with the addition of the two-faced Roman god Janus. Janus was traditionally thought to be the namesake of the month, although it is more likely it was named for the goddess Juno instead. He is pictured inside a tiny castle against a gold backdrop. 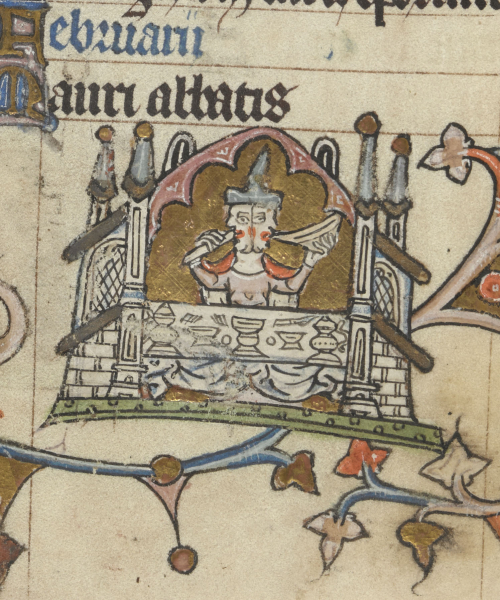 The miniature on the facing folio is the zodiac sign associated with January, Aquarius, drawn as a nude male figure holding a jug of water. Aquarius is usually pouring the water out from the jug (compare it to the Bedford Hours version) but has here apparently already emptied it. An architectural border frames the outdoor scene (notice the green grass!), but with the addition of two hybrid creatures – human heads topped by tall hats perched on the legs of what appears to be a large cat, tails curling through the legs to extend out into the margin. 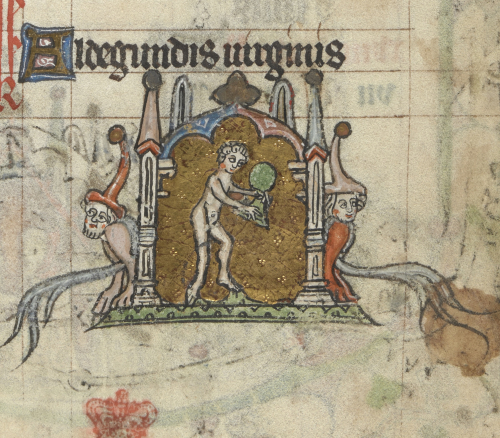 We could go on about the different faces in these pages, but we’ll leave it to you – how many animals/hybrid figures can you spot?

Additional MS 36684 can be viewed online in its entirety on Digitised Manuscripts. The second half of the manuscript is in the Pierpont Morgan Library in New York City, as MS M. 754, which you can see here. Check back on 1 February for the next calendar page!

KL = Kalendae, the Kalends, i.e. the first day of the month. The subsequent Roman dates are given in the column next to the saints' days.