Edward the Confessor, who died on 5 January 1066, may have been the penultimate Anglo-Saxon king of England, but he is also the first English king whose seal, in wax, survives to the present day. An example is found attached to British Library Lord Frederick Campbell Charter XXI 5. A fragile disc of yellow wax measuring 78 mm in diameter, it has been damaged at the edges, but the seated figure of the king can still be discerned in the centre of the disc. 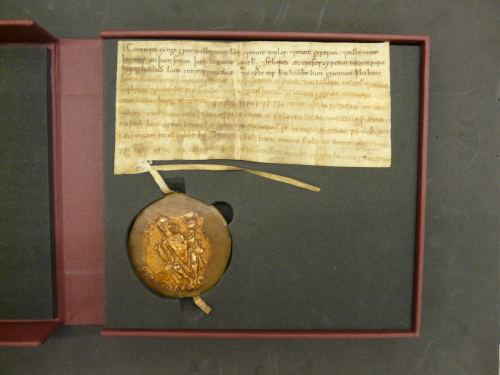 On the front of the seal, Edward is depicted sitting on a throne, holding an orb in one hand and what may be a staff of office topped with a cross in the other. On the reverse, Edward is also shown seated, although this time he holds an oblong shape, which may be another staff in one hand. In the other, he holds what may be a sword at an angle. 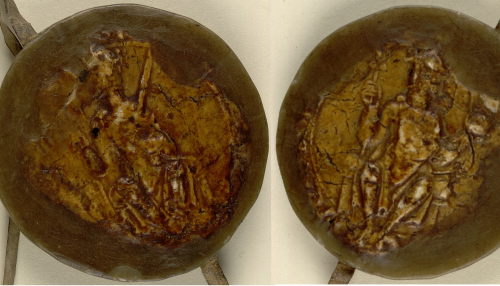 The seal is attached to a writ with the following text, in which Edward purportedly instructed ‘my bishops and my earls and my reeves and all my thegns in the shires in which Archbishop Stigand and the community at Christ Church have land’ to respect the rights, jurisdiction and property of the community, ‘because I have given these rights for the eternal salvation of my soul, as King Cnut did previously. And I will not tolerate that any man breach this, by my friendship’ (full text and translation available at the Electronic Sawyer). As can be seen however from the different colours of ink, however, the text was altered on at least one occasion.

Although Edward’s seal is the first to survive in contemporary wax impressions, Edward was hardly the first Anglo-Saxon or even Anglo-Saxon royal to have a seal matrix. (A matrix is the term for the imprinting device or mould used to create a seal.) Possibly the earliest surviving seal matrix from England is a late 7th or early 8th-century ring, now in Norwich Castle Museum. The ring is inscribed with the woman’s name ‘Balde hildis’. One famous Bathild or Balthild was sold as a slave and eventually married the Frankish king Clovis II (although it is not clear if she was the Bathild to whom the ring refers). By the end of the 8th century or the beginning of the 9th century, King Coenwulf of Mercia’s name was on a lead bulla from which impressions could be made, and which is now in the British Museum. 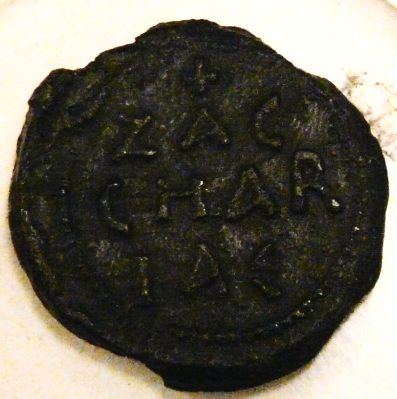 The tradition of using seals with documents stretches all the way back to ancient Mesopotamia, but these early Anglo-Saxon seal matrices may have been inspired by contemporary continental precedents, particularly papal seals. For example, British Library Detached Seal XXXVIII 5 is a lead bull of Pope Zacharias from between 741 and 752. There is no record of when this particular bull arrived in England, but some scholars have suggested it (or one like it) was in England by the late 8th century, because it may have inspired the design of a penny of Offa. Correspondence with continental figures may have required as well as inspired the use of seals in England, since some leaders insisted on them. In the 860s, Pope Nicholas complained that letters which were being sent to him without seals. It may not be a coincidence that a seal of Æthilwald, bishop of Dummoc had a seal matrix by the mid 9th century, now preserved in the British Museum.

By the time Edward the Confessor’s writ for Stigand and the church at Canterbury was being sealed, there was a long tradition of using seals in England among both kings and nobles, even though few matrices and fewer impressions survive to the present day. Although Hollywood films frequently portray wax seals being used to close folded letters, to be broken before reading the letter’s contents, the writ of Edward the Confessor shows that Anglo-Saxon seals were frequently attached to a strip of parchment cut from the end of a document, to be preserved as an outward mark of authority. Already in the late 9th century, the Old English adaptation of Augustine’s Soliloquies, traditionally attributed to King Alfred or his court, expected its audience to understand that a lord’s insegel (seal) conveyed authority and identity: ‘Suppose a letter with a seal from your lord came to you; can you say you cannot understand him by that, or recognise his will in it?’

Resolution of a property dispute at a shire-moot, with detail of the sentence mentioning the seal: Cotton Augustus II 15, England, 990–992

In other cases, messengers may have carried a lord’s seal with them, with or without an attached document. A document from between 990 and 992 claims that Edward’s father, Æthelred the Unready, sent his ‘insegel’ (seal) to a shire meeting ‘by means of Abbot Ælfhere of Bath and greeted all the councillors that were summoned there… and bade and commanded that they should reconcile Wynflæd and Leofwine’, two people engaged in a property dispute. It sounds like Æthelred gave Ælfhere his seal and instructions, without necessarily attaching the seal to a document.  Meanwhile, the document in which this is recorded uses a chirograph, not a seal as means of verifying its duplicate.

Seals could be used to authorise people, as well as documents or verbal instructions. A pact between Æthelred and Duke Richard of Normandy, negotiated with help from the pope, noted that ‘Richard is to receive none of the king’s men, nor of his enemies, nor the king any of his, without his seal’, as part of an joint agreement not to harbour any Vikings. 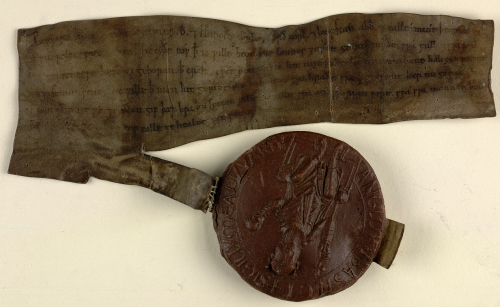 Documents with seals in general, and Edward’s seals in particular, became increasingly important after the Norman Conquest, as the administrators of Domesday surveys tried to reconstruct who had what tempore Eadwardi regis—in the time of King Edward. One of the forms of proof they would accept was a writ with Edward’s seal on it, and Domesday Book records many more sealed writs of Edward than survive today. Of course, not all these documents or seals were necessarily genuine. Even the 11th-century writ in favour of Canterbury with the seal features a different ink and possibly a different, later scribe in the second part of the text, which may have been altered at some point after Edward’s death. Attempts to forge documents and seals in the name of Edward the Confessor continued well into the post-Conquest period: these elaborate and enormous seals are remarkable for how different they look from the small, yellow seal attached to the 11th-century writ. Although the later forgeries are more elaborate, however, the earliest surviving royal seal from England still makes a lasting impression (pun intended).