Over the past year, many critics have noted the dominance of 'spin-offs', new releases which are sequels to or take place in the same imaginary worlds as already-popular blockbusters. But popular spin-offs are not a modern phenomenon. Take the example of 'satellite texts' of the Roman de la Rose, one of the most famous poems in the French language. The medieval equivalent of a best-seller, it survives in more than 300 manuscript copies, and was composed in two sections, written decades apart: the first part was written by Guillaume de Lorris (c. 1230) and it was continued by Jean de Meun 40 years later. In many manuscripts, the Roman de la Rose was copied with other texts attributed to Jean de Meun, which are often described as 'satellite' or spin-off texts. Although the Roman de la Rose tends to overshadow some of these other texts, they were nevertheless popular in the Middle Ages. 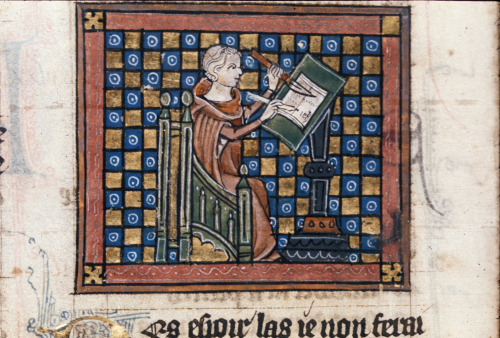 In many manuscripts, the Roman de la Rose is followed by a text entitled the Testament de maistre Jehan de Meun. It acts as a morally edifying conclusion to the famous allegorical poem, opening with the lines:

The Father, the Son and the Holy Spirit/God in three persons, loved and adored

Attributed to Jean de Meun, the Testament was composed at the end of the 13th century and comprises 544 alexandrine quatrains. The author explains to the reader that he wants to apologize for the works he wrote during his youth just to achieve success: is this remorse a reference to Meun’s work on the Roman de la Rose? Some of Jean de Meun’s leitmotivs are present in this poem, especially his criticism of women and mendicants. 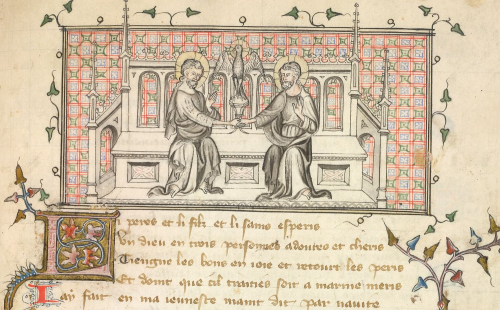 A miniature in grisaille of the Trinity with a finely-worked coloured background, from the Testament, 1380–1390: Yates Thompson MS 21, f. 143r.

The Testament is described by its author as a moral treatise inspired by God and charity. It was elaborated as a spiritual journey for the discovery of Truth and Good in which the author confesses to the reader his awareness of the vanity and finite nature of human life. The poem focuses on the themes of death and on the utility of prayers to the dead as well as the living.

The construction of the poem is inspired by disputation, the exercise commonly practised in medieval universities. The author combines the rigour of university culture with the traditions of vernacular literature. The success of the Testament was significant, probably due to its attribution to de Meun. It was widely disseminated throughout the late Middle Ages, though rarely alone: its transmission was closely linked to that of the Roman de la Rose, especially during the 14th century. 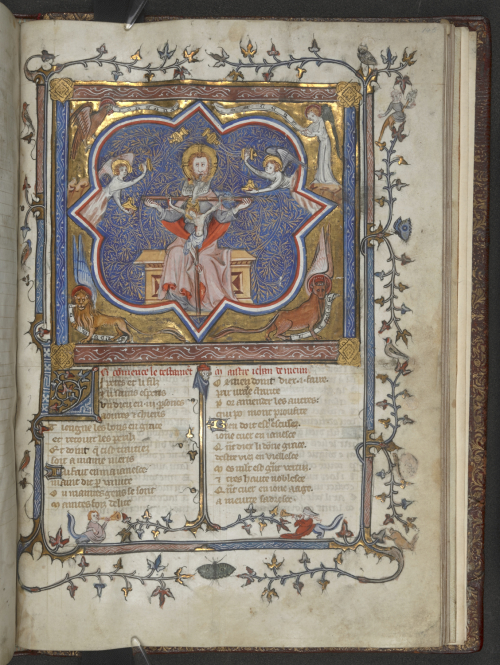 The Testament is often accompanied by two other texts attributed to Jean de Meun: the Codicille or ‘petit Codicille’ and the ‘Grant Codicille’, also known as the Sept articles de foi. The ‘petit Codicille’ is sometimes considered to be an appendix to the Testament and is sometimes even entitled ‘petit Testament’. It includes 88 lines of eight syllables per line. Composed at the end of the 13th century, it takes the form of a prayer, beginning:

God keep the Soul of the dead/ because of the goods they amassed/ they did not get never enough of these. The final bestseller attributed to Jean de Meun is the Sept articles de foi, also called Trésor de la foy or, confusingly, just Codicille (see, for example, ’Cy commence le codicille maistre Jehan de Meun': Royal MS 19 B XII, f. 181r). However, although for a long time this work was attributed to Jean de Meun, it has now been established that it was composed by Jean Chapuis around 1300. 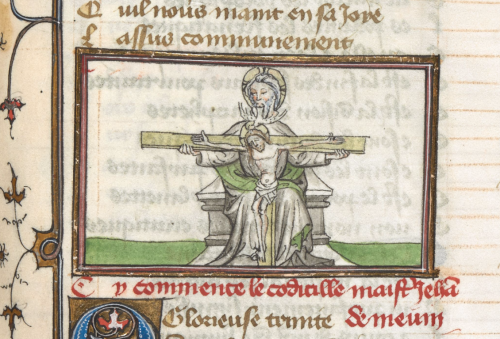 This is a devotional and eschatological poem advocating contempt for the world and the necessity to praise God, Christ and the Virgin Mary for the salvation of the soul. It deals with the symbolic number seven such as the seven virtues and the seven liberal arts in opposition to the seven deadly sins.

Although it is now accepted that Meun did not write this poem, in 1401 this poem was at the centre of an attempt to clear Jean de Meun’s reputation in a tumultuous debate involving Christine de Pizan. One of Jean de Meun’s defenders, Gontier Col, secretary to Charles VI, sent her a copy of the Sept articles de foi to try to persuade her to renounce her condemnation of Jean de Meun. In response, Christine de Pizan, with irony, denounced people who attributed any works to Jean de Meun. Her answer shows that the poem’s attribution to Meun was already disputed at the beginning of the 15th century. 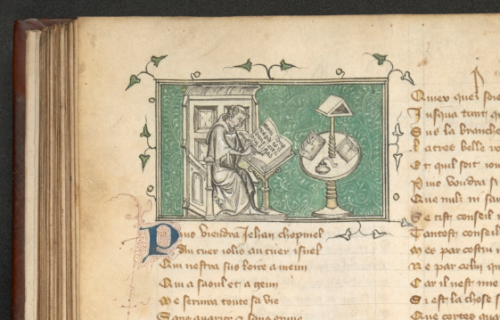 The above three texts gained popular success during the 14th and 15th centuries, partly because of their close association with the Roman de la Rose and Jean de Meun, and because they seemed to show the presumed author’s repentance. It is tempting to draw parallels with modern spin-offs, which are often framed as responses to earlier criticisms of franchises and whose popularity is sometimes attributed to their association with other well-known subjects and creators. But the satellites of the Roman de la Rose are also worth analysing as examples of the popularity of devotional literature aimed mainly at lay people.

I confess to referring to RdlR, Canterbury Tales spin-offs, and swathes of medieval Arthurian lit as fan fiction.