A Medieval Wikipedia: Bartholomew the Englishman’s On the Properties of Things

The British Library has recently digitised a copy of one of the most popular medieval reference works: Bartholomew the Englishman’s On the Properties of Things (De proprietatibus rerum), an encyclopaedia meant to serve as a reference guide for all of the ‘things’ — a Wikipedia equivalent of the Middle Ages.

The copy just digitised is Additional MS 8785, a vernacular translation produced around the year 1308 in Mantua, Italy, and is full of unique illustrations. The author of the Latin original, Bartholomew the Englishman (d. 1272), was a Franciscan monk living in Paris, and On the Properties of Things (completed around 1240) became a medieval bestseller; there are over 200 manuscript copies of the text surviving today. 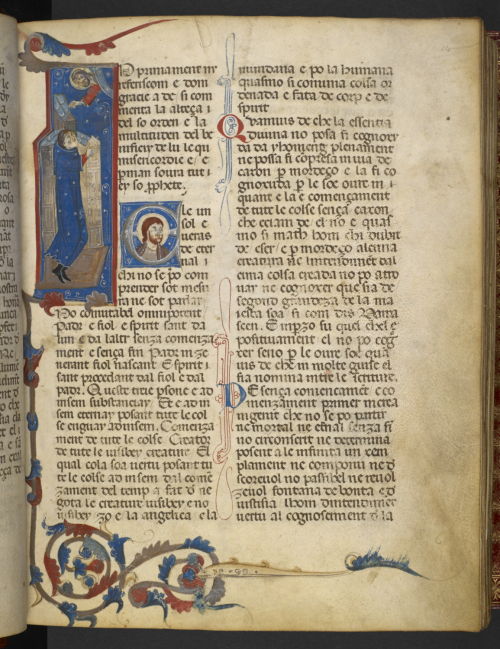 Bartholomew the Englishman inspired by Christ to write On the Properties of Things, and next to him a depiction of Christ, marked by the golden halo (Add MS 8785, f. 14r).

Bartholomew divided his encyclopaedia into 19 books on different topics, including natural philosophy and theology, anatomy and medicine, astronomy and astrology, the elements, zoology, botany, geography, geology and mineralogy, among others. 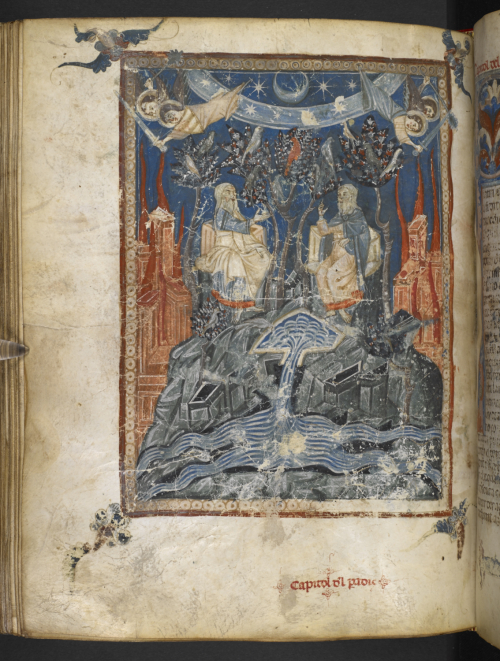 Book 15: On Geography: an image of an ‘Earthly paradise’, featuring two men debating in a rocky landscape before a burning city, surrounded by angels, plants and streams (Add MS 8785, f. 191v).

Additional MS 8785 is notable for being one of the earliest vernacular translations of the encyclopaedia, put into the Italian dialect local to Mantua by a man called Vivaldo del Belcalzer. Nothing is known about Vivaldo except what he writes in the beginning of the manuscript, which is that he presented it — complete with over one hundred illustrations — to the signore of Mantua sometime around 1308. 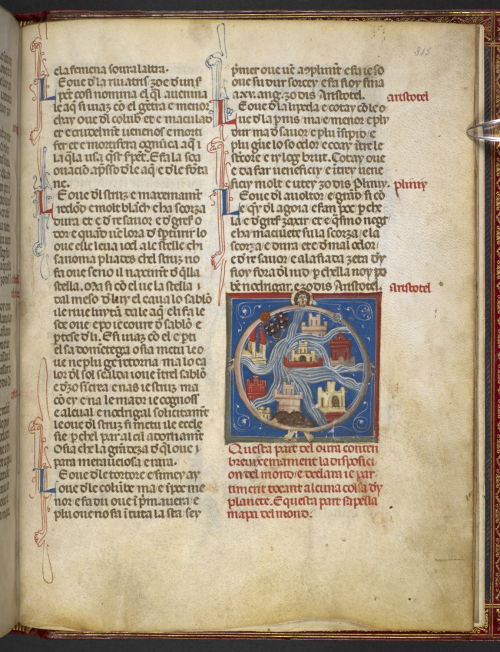 End of book 19 (section entitled ‘mapa del mond’): a small map of the world with buildings in place of cities, Jerusalem at the centre, divided by the seas; the globe is held by Christ, whose head is at the top, hands at each side, and feet at the bottom (Add MS 8785, f. 315r).

This copy includes more illustrations than most, many of which are situated inside small initials beginning the different sections of the text, known as historiated initials. The most popular book is probably number 18, ‘On Animals’, which was often illustrated and associated with the bestiary tradition (for more on bestiaries, see our recent blogpost on Fantastic Beasts). In addition to depictions of familiar animals — dogs, cats, lions etc — there are also descriptions of a few fantastic beasts, including this page devoted to the so-called ‘monstrous’ races of hybrid humans: 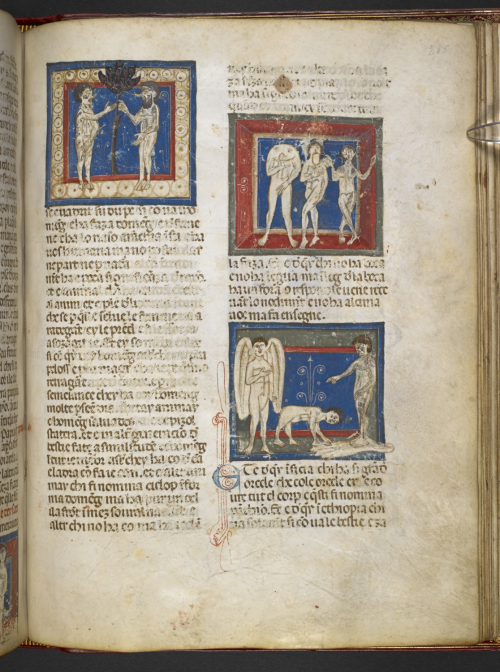 It was rare for all chapters of On the Properties of Things to be illustrated, and this is particularly the case for Books 5–7, which dealt with the anatomy of the human body, the four humours and diseases. In these books, the historiated initials beginning each section include small images of organs and other body parts; on the page below, the initial in the left column includes a foot and at top right, a heel. The larger initial ‘S’ towards the bottom right of the page features a robed man holding a book, likely a depiction of one of the medical authors that Bartholomew consulted when compiling the encyclopaedia, whose names are credited in red ink in the margins. 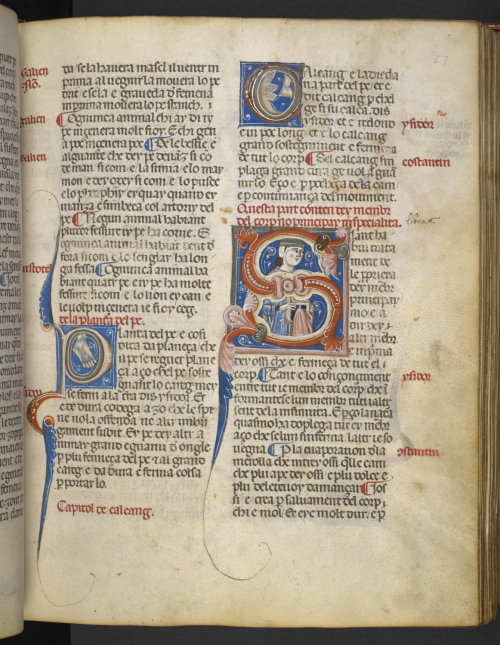 And finally, one of our favourite images is from Book 17 (On Herbs and Plants): a depiction of a vineyard, in which the lady in the centre has perhaps overindulged in the large carafes of wine being offered to her! 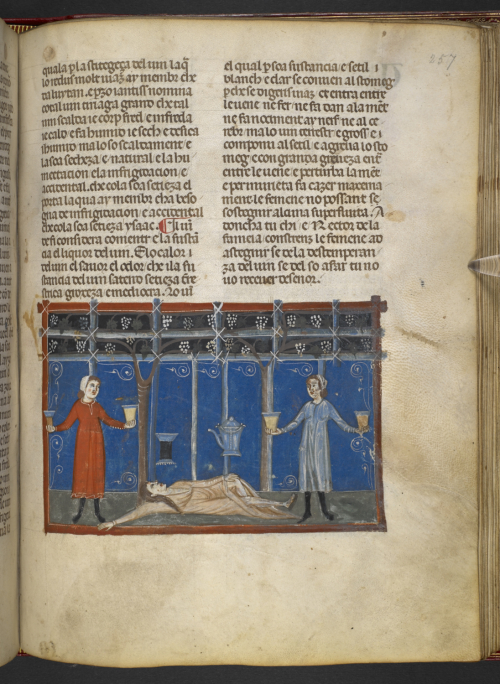 As Bartholomew wrote in his epilogue, this encyclopaedia was meant to be read by ‘the simple and the young, who on account of the infinite number of books cannot look into the properties of each single thing about which Scripture deals, can readily find their meaning herein — at least superficially’. You can see the entire manuscript on our Digitised Manuscripts site – let us know what meanings you find!