On 21 June 1381, during the Peasants’ Revolt, a mob in Bury St Edmunds was out to kill. Among their chosen targets was John Lakenheath, a monk at the abbey as well as keeper of the barony (custos baronie), making him responsible for collecting dues and fines for the abbey’s manors. His crime: putting the abbey’s archives in order after they had been sacked by the townspeople as long ago as 1327. With all the relevant documentation at hand, the abbey had been asserting its claims stridently. 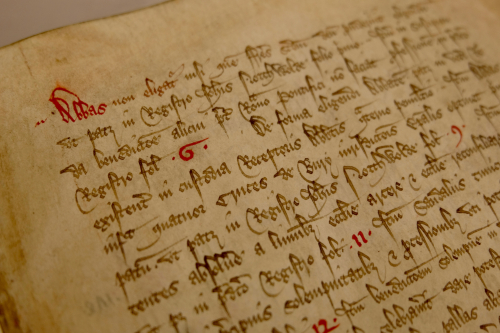 The book that made John so hated survives in the British Library as Harley MS 743, the ‘Lakenheath Register’. It is a calendar or directory of the documentary evidence held at the abbey in John’s time, showing its claim to properties, fees it was owed by tenants, and other legal privileges. It is not highly decorated, but it is full of energy, as reflected in the opening to John’s preface (translated from Harley MS 743, f. 3v):

After our monastery was destroyed by robbers and fire, and the registers of the abbots and other muniments were stolen stealthily without return, the thin ears of corn behind the backs of the reapers had hardly remained from such an abundant harvest of evidence for the church. Because of this, I, brother John Lakenheath, have arranged from various registers a kind of calendar, whatever the circumstances. In it, I have laid out in alphabetical order the names of certain manors about which I learnt any documentary evidence. By this, the evidence may more openly be accessible to future generations, that within and outside their liberty, the abbot and convent may have the power to proclaim their royal rights and other liberties more confidently. I ask the reader to mark this work in kindness rather than presumption. 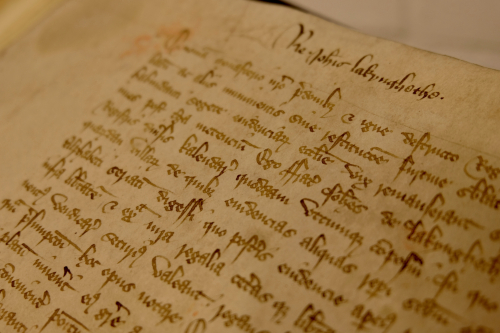 John goes on to lay out his organisational scheme. Writing in 1379, tensions were already growing, and he may have already realised the danger he was in as he was compiling his register. He ends on an ominous note: ‘If for certain reasons I am unable to complete something noted above, may the reader accept the will for the deed, and may he ask the omnipotent to have mercy on the soul of the compiler.’ The book allows the reader to look up a particular estate, and find all the documents associated with it, going back to the day of William the Conqueror. In a society that was placing an ever-increasing value on written over oral evidence, one can easily imagine the power this conveyed. 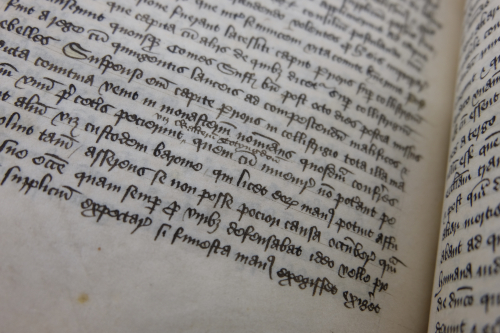 John’s work led to personal disaster. The story of his death is told by another Bury monk, John Gosford, in his Election of John Timworth (Electio domini Iohannis Tymwrith in abbatem, Cotton MS Claudius A XII, ff. 135v–136r):

Hanging the prior’s head on a pillory, that whole cursing band came into the monastery, naming certain brothers, of whom they sought one before all the others, namely Walter Toddington; but when they could not find him, they sought another, namely the keeper of the barony. Although he could have fled from their hands, he refused to do so, declaring that he could not fall to a better cause than for the rights of his church, which he was always defending to the best of his ability, and therefore he wished to await the atonement of death for its sake, if it would drive their murderous hands from it. Some people from the village who hated him very much, pretending that they would be clean by his blood, arranged for the wicked people from the region to capture, hold, and kill him. When they came into his cloister where he had been stationed, they shouted, ‘Where is that betrayer?’ He answered them, ‘I am not a betrayer; but if you wish to have me, here I am.’ They shouted, ‘We have found the betrayer!’ They carried him away from the cloister, and led him into the middle of the marketplace: leading him through the road, they dragged him along. They not only attacked him with blows, but inflicted many mortal wounds on him, so that he was nearly dead by the time he reached that place. There, the killer struck him seven times before he was able to cut off his head. They set it up on the pillory with the other heads.

Depending on one’s point of view, the Lakenheath Register can mean something quite different: the townspeople must have thought it an instrument of tyranny, while the abbey depicted John’s work as that of a martyr. The truth, as always, is somewhere in between.

I'd say the Church had forgotten it's mission statement and was more concerned with property and income. Not that he deserved to die for that.

But, what do i know, i'm just a 21st century socialist.