Our colleagues in the British Library's publishing team (otherwise known as @bl_publishing) recently spent a day managing the Library's Twitter account. Throughout the day, they encouraged followers to send in their shelfies, i.e. selfies of their bookcases. Sharing shelfies has recently become a popular social media trend among bibliophiles and literature enthusiasts. However, the appreciation of the aesthetic value of books and bookcases is not just a modern day phenomenon. Medieval manuscripts contain many images which depict books being stored in various styles of bookcases and shelves. Certain physical features of manuscripts themselves can also suggest how books were stored to be both visually attractive and accessible for the reader. 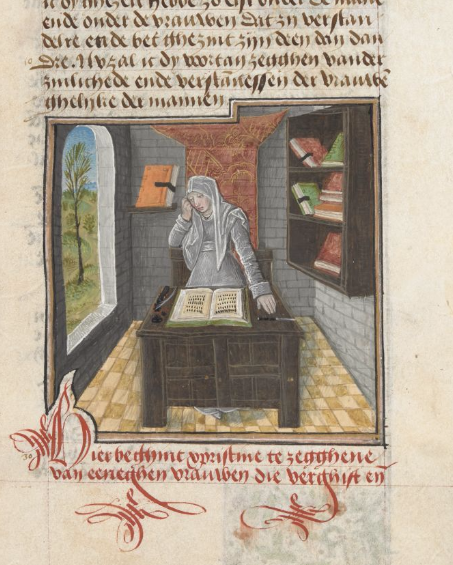 Most depictions of bookcases in medieval manuscripts can be found in images of scribes writing in a scriptorium. Within these images it is rare to see books stored with their spines facing outwards as is common today. There is evidence that books were stored in a number of different ways, such as stacked on top of one another or placed side by side. In the image below, the Dominican friar and author Vincent of Beauvais is pictured writing at his desk, surrounded by books stored with their covers on display (or easily covered by a green curtain). This method of storage may have been used for luxury books with lavish, embellished bindings. A previous post on our blog, discussing detached bindings in our collections, provides an idea of how decorative book covers could be. 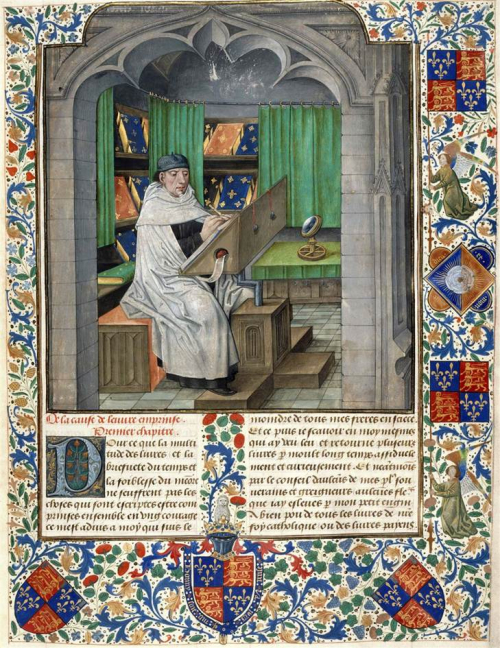 Detail of a miniature of Vincent of Beauvais sitting at a desk and writing his book, from Le miroir historial (a French translation of his Speculum historiale, translated by Jean de Vignay), Bruges, 1479-1480. British Library, Royal 14 E I/1, f.3r

Alternatively, books could be placed flat or even stacked on top of each other, as in the famous image of the Old Testament scribe and priest, Ezra. Behind Ezra is a special kind of book-cupboard, in which the books were laid flat next to one another. This image is taken from the Codex Amiatinus, a complete copy of the Bible which dates to the early 8th century. This manuscript was written in the monastery of Wearmouth-Jarrow, on the north-eastern coast of modern-day England, and was intended as a gift for Pope Gregory II. Wearmouth-Jarrow was also home to the Venerable Bede, who would have been writing in the scriptorium at the same time as this manuscript was being produced. It is possible that the bookcase and writing desk in the image were inspired by those at the scriptorium at Wearmouth-Jarrow in the 8th century. 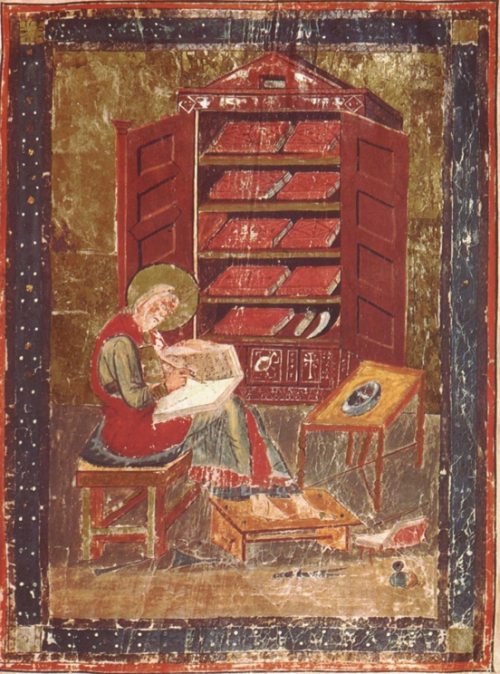 These images do not show the titles of the books on display, unlike modern shelfies. For that sort of shelfie from the medieval period, there are booklists or inventories, which record the books held at a particular library or institution. These lists are extremely useful for scholars trying to reconstruct the contents of ancient and medieval libraries which have been separated or lost over time. By understanding the contents of medieval libraries, it is also possible to identify specific texts which influenced the work of medieval authors. 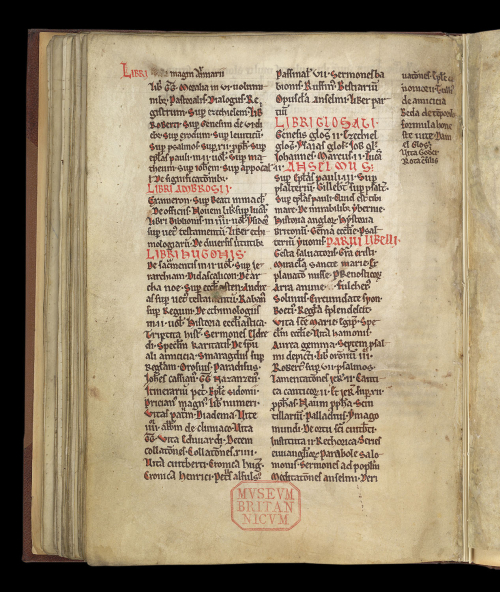 List of books from the Augustinian priory of St Mary, Bridlington, Yorkshire. The list is headed ‘Books of the big book-cupboard’ ('Libri magni armarii'). Rubrics separate lists of books by Ambrose, Hugh of Saint-Victor and Anselm, while others are grouped as glossed books or small books (the latter perhaps on shallower shelves). From a glossed copy of St Mark's Gospel, Northern England, c. 1150-1200. British Library, Harley MS 50, f. 48v

Booklists also provide an insight into the interests of individual patrons of books and libraries. For example, the booklist below was copied into a 10th-century manuscript and records the collection of an otherwise unknown Æthelstan. The contents of this list suggest that he was interested in works of grammar and rhetoric.

The physical appearance of manuscripts can also suggest how they were stored, and what medieval bookcases might have looked like. In a previous post, we discussed an unusual 12th-century manuscript which still retains the fur of the animal skin used for its binding. The binding also features small metal roundels and some metal bosses which protrude from the cover. These metal roundels may have been added to protect the books and provide support when they were stored in bookcases. 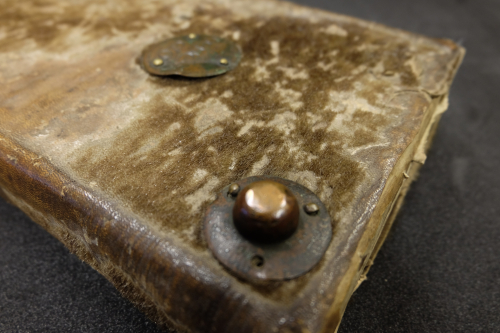 Meanwhile, this 9th-century Gospel-book provides a clue that it may have been stored with its fore-edges facing out.  While the titles of modern books are written on books' spines, because we usually store books with spines facing out, the title of this book is written on the edges of the pages.

Detail of the title added to the fore-edge of a Gospel-book containing the Gospels of St Luke and St John, Corvey?, c. 875-900. British Library Egerton MS 768

An item in the British Library's collection of papyri also helps our understanding of the appearance of ancient libraries. Below is a small papyrus label which dates to the 2nd century, and was attached to a papyrus containing the words of Baccylides, a Greek lyric poet. These labels would have been attached to papyrus scrolls in order to make specific texts easier to find within larger collections.

A 2nd-century papyrus fragment of Bacchylides retains its parchment label, used to identify the volume on a bookshelf. British Library Papyrus 2056

The word 'shelfie' is a portmanteau combining the words shelf and selfie. A previous post on medieval selfies demonstrated that self-portraiture was popular long before the rise of front facing cameras and selfie sticks. Shelfies, too, clearly have a history that is older than the creation of the Twitter hashtag!