In the list of books bequeathed by Bishop Leofric of Exeter (d. 1072) to his cathedral, one entry might, at first glance, take a modern reader by surprise: a ‘ful spelboc’, or a full spell book.  This is not, however, evidence that the learned bishop was dabbling in magic. In Old English, spell just meant ‘saying’ or ‘speech’. 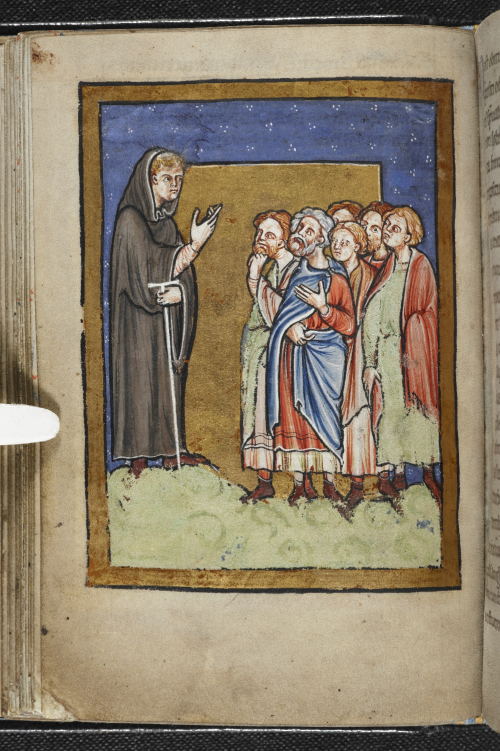 The term ‘spell’ had a range of meanings in Old English. As a noun, it could mean story, discourse or message. For example, it was applied to the tale told about Beowulf, a story (spel) crafted skilfully by a ‘boast-laden man, mindful of songs’. Old English writers also used spell to refer to learned discourses or works of history. Spell could also mean news or message, as in the English translation of the Greek εὐαγγέλιον (euangelion): ‘gospel’, or ‘good spell’. As a verb, it meant ‘to talk’ or ‘to converse’. (Ironically, the modern English verb ‘to spell’ actually comes from the French épeler, although that also has a proto-Germanic root.) 'Spells' only seem to have become associated with magic much later: according to the Oxford English Dictionary, one of the first recorded use of ‘spell’ to mean magical incantation was in 1579, in Edmund Spenser’s Shepheardes Calendar. In Old English, terms like galdor or seiðr seem to have been used for incantations and charms, in some contexts. In the case of Leofric’s spell book, then, ‘spell’ probably referred to speeches or sermons in Old English, intended to instruct listeners about Biblical and church history and to inspire them to think about their own lives. Although some items on Leofric’s list have been identified with manuscripts which survive to this day (including a collectar and a book of riddles and poetry), scholars have yet to agree on whether any surviving books of Old English sermons are Leofric’s ‘ful spelboc’. The British Library does, however, possess a few sermons which were copied at Leofric’s Exeter, in the opening folios of Cotton MS Cleopatra B XIII. These include sermons for different times of year, like the second Sunday after Easter, sermons for special occasions, like the dedication of a church, and other sermons that could have been used at any time. It ends with a promise a king was supposed to make at his consecration, to uphold justice and protect his people. These folios are now followed by a life of St Dunstan and a later history. 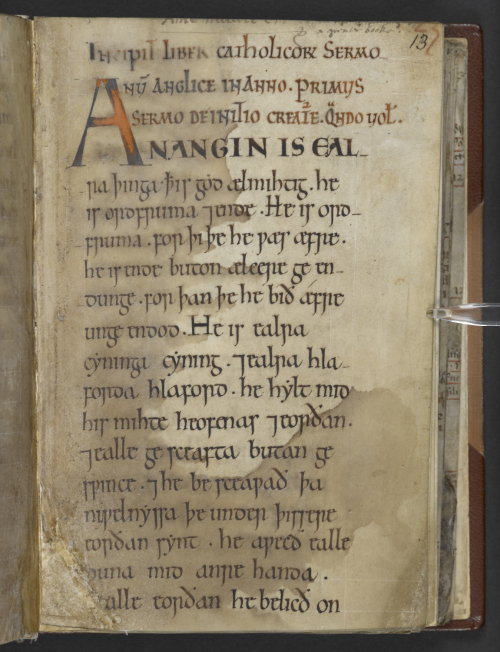 Sermon on the beginning of creation, Cotton MS Cleopatra B XIII, f. 13r

In addition to the sermons in Cotton Cleopatra B XIII, the British Library has many other Old English ‘spellbooks’, including some of the earliest known copies of Ælfric’s sermons and books of Old English sermons produced several decades after the Norman Conquest, showing the continuing use of Old English (such as Cotton MS Faustina A IX). 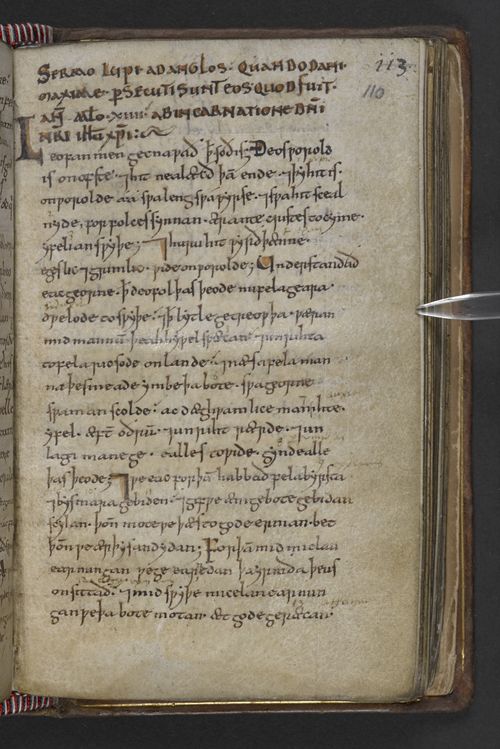 ‘Understand that the Devil has led this nation astray for many years, and that little loyalty has remained among men!’ Copy of the Sermon of the Wolf to the English with Wulfstan’s own annotations, Cotton MS Nero A I, f. 110r

Reading these Old English sermons, one can see how they fit the many meanings of ‘spell’, in Old and Modern English. They often include retellings of exciting stories: contrary to the modern stereotype about sermons being boring, these Old English sermons feature cases of mistaken identity, cross-dressing monks, miraculous animals, and more. These sermons were also supposed to act like modern magical spells, in the sense that they were intended to change the speakers’ world by persuading listeners to alter or stop their behaviours: see the bombastic ‘Sermon of the Wolf to the English’, written by Archbishop Wulfstan of Worcester-York during the Second Viking Age. These speakers and their spells knew the power of words, even without any magical force behind them.

So if you use words in any form today, remember: you are casting spells, in the oldest sense of the word. Use them well!

This is my testimony about the good work of a man who helped me..My name is Robin Maria, and I base in England. My life is back! After 2 years of marriage, my husband left me with our three kids. I felt like my life was about to end, and was falling apart. Thanks to a spell caster called Chief Dr Obelu Irabor. who I met on-line. On one faithful day, as I was browsing through the Internet, I was searching for a good spell caster that can solve my problems. I came across series of testimonies about this particular spell caster. Some people testified that he brought their Ex lover back, some testified that he restores womb, some testified that he can cast a spell to stop divorce and so on. There was one particular testimony I saw, it was about a woman called Jessica, she testified about how Chief Dr Obelu Irabor. brought back her Ex lover in less than 72 hours and at the end of her testimony she gave ME e-mail address. After reading all these, I decided to give Chief Dr Obelu Irabora try. I contacted him with his via email address (doctorobeluiraborspellcaster@gmail.com ) and explained my problem to him. and he told me what to provide, then i do. In just 2 days, my husband came back to me. We solved our issues, and we are even happier than before. Chief Dr Obelu Irabor is really a talented and gifted man and I will not to stop publishing him because he is a wonderful DOCTOR...If you have a problem and you are looking for a real and genuine spell caster to solve that problem for you. Try Chief Dr Obelu Irabor. today, he might be the answer to your problem. Here's his contact: doctorobeluiraborspellcaster@gmail.com .. Thank you once again Chief Dr Obelu Irabor. Contact him for the following PROBLEMS:
(1)If you want your ex back.
(2) if you always have bad dreams.
(3)You want to be promoted in your office.
(4)You want women/men to run after you.
(5)If you want a child.
(6)[You want to be rich.
(7)You want to tie your husband/wife to be yours forever.
(8)If you need financial assistance.
(9)If you want to stop your Divorce.
10)Help bringing people out of prison.
(11)Marriage Spells
(12)Miracle Spells
(13)Beauty Spells
(14)PROPHECY CHARM
(15)Attraction Spells
(16)Evil Eye Spells.
(17)Kissing Spell
(18)Remove Sickness Spells.
(19)ELECTION WINNING SPELLS.
(20)SUCCESS IN EXAMS SPELLS.
(21) Charm to get who to love you.
(22) cure HIV/AID
Call or whatsapp
+2348115543019
Email: doctorobeluiraborspellcaster@gmail.com
Chief Dr Obelu Irabor