Today is Pancake Tuesday, when many cooks whip up pancakes in every size, shape and flavour! This popular tradition coincides with Shrove Tuesday, the last day before the start of Lent. Lent is the period of 40 days which comes before Easter, and during the Middle Ages this time was observed by fasting. As the day before Lent, Shrove Tuesday was marked by families indulging in foods forbidden over the fasting period, including meat, fats, eggs and milk. These were also foodstuffs that would not remain fresh over the 40-day fasting period, so it was necessary for households to use up these ingredients.

One common dish that combined fats, milk and eggs, with an addition of flour, was the pancake. Did you know that the British Library holds a 13th-century recipe for pancakes from an English collection of culinary recipes (now Additional MS 32085)? Detail of a rabbit baking its own bread in a miniature oven, from Lansdowne MS 451, f. 6r

This recipe for white crepes or pancakes is composed in Anglo-Norman French, and it is similar to modern pancake recipes.

Here is a translation so you can judge for yourself:

2. White pancakes. Here is another dish, which is called white pancakes. Take best white flour and egg white and make batter, not too thick, and put in some wine; then take a bowl and make a hole in it; and then take butter, or oil, or grease; then put your four fingers in the batter to stir it; take the batter and put it in the bowl and pour it through the hole into the (hot) grease; make one pancake and then another, putting your finger in the opening of the bowl; then sprinkle the pancakes with sugar, and serve with the ‘oranges’.

Watch out, though, these ‘oranges’ actually refer to another recipe in the collection for pork meatballs made to resemble fruit. However you enjoy your pancakes, get them while they’re hot! 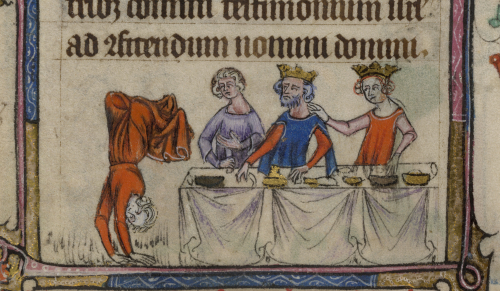 Bas-de-page scene of Salome dancing on her hands before the feasting of Herod and Herodias from the Taymouth Hours, Yates Thompson MS 13, f. 106v

I am researching the origin of the use of the word "orange" and in particular in relation to a description of carrots. Can you confirm that "orange" was actually used in the 13th C ms?

Thanks for your comment. You can see in the second image in the post that 'orange' is the last word on the last line of the recipe.

Does the medieval manuscript refer to Pancake Tuesday? Great Lent used to start on Clean Monday. When was it changed to Wednesday?