The Seven Sages of Rome: Stories of the Wicked Ways of Women

The Seven Sages of Rome is a varied collection of moral stories or exempla that includes over 100 tales in one or more of the many versions that exist throughout Europe and the East, where they originated. The unifying theme is provided by the story of Florentin, son of the Emperor Diocletian, who is under threat of death. 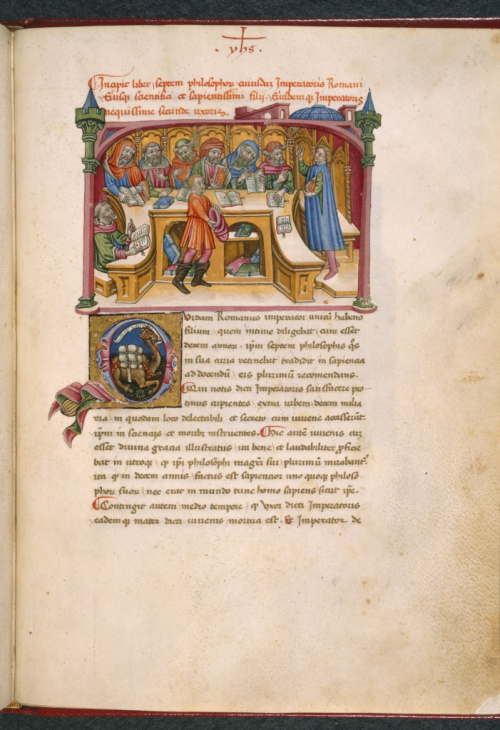 He has been accused by his young stepmother of seducing her and plotting against his father. For seven days the seven sages, tutors of the prince, try to obtain a stay of execution by telling the Emperor stories of the wickedness of women, while the stepmother counters these with stories of her own, pointing to Florentin’s guilt. Having remained mute all this time, the prince himself speaks on the eighth day to proclaim his innocence, and the Queen is judged guilty and executed. 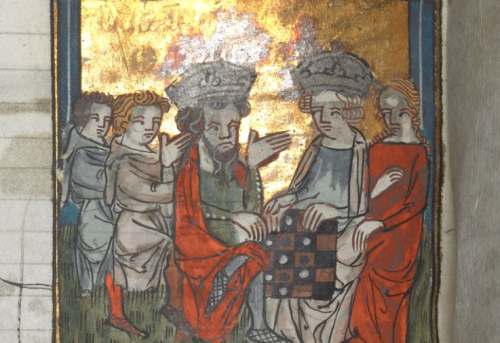 The tales in the original collection have names like Arbor or ‘The Pine and its Sucker’, Canis or ‘The Greyhound and the Serpent’, and Puteus (the Well) or ‘The Husband Out of Doors’, in which an unfaithful wife, who has been locked out (or locked away, depending on the version) by her husband as punishment, pretends to drown herself in the village well, and when he goes  to the village square to investigate, she locks him out in turn and he is then arrested for breaking the curfew.

Ward’s Catalogue of Romances in the British Museum lists 6 manuscripts in Volume II, Eastern Legends and Tales, as the roots of the cycle of tales is in the East: The Book of Sindibad, believed by some to originate in India, possibly as early as the 5th century BC. The earliest medieval western example in the British Library's collections, Harley MS 3860, is in French, and was copied in the north of England in the early 14th century. The manuscript comprises historical chronicles, Grosseteste’s Chateau d’amour  and the Manuel des Pechies  and has just been published in full on our Digitised Manuscripts site. 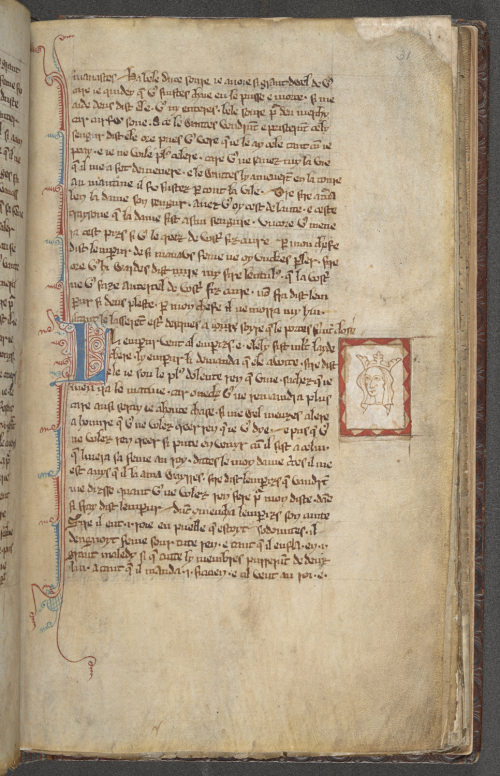 Also from the early 14th century is Additional MS 27429, translated into Italian from the French, based partly on the version in Harley 3860 and partly on an earlier French version.  The relationships between the texts are complex.

A copy in Latin, Additional MS 15685, is from mid-15th-century Venice, with colourful miniatures: 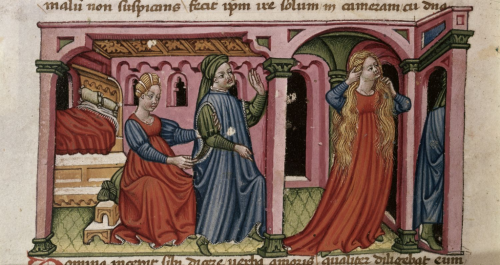 Out of a total of 9 surviving manuscripts in Middle English, 3 are in the British Library, each originally containing 15 tales, though one, Arundel MS 140,  is now incomplete.

Cotton MS Galba E IX from the late-14th and Arundel MS 140 from the early-15th century are collections of moral and religious texts, both containing The Prik of Conscience as well as the Seven Sages. In the first, the pine tree becomes a ‘pineappel tre’.

Egerton MS 1995, a miscellany of prose and verse from the south of England, begins with the Seven Sages and includes the original version of John Page’s poem on the siege of Rouen. The beginning of ‘The fyrste tale of the Emperasse’ from The Seven Sages of Rome, Egerton MS 1995, f. 10r

Continuation of the Sept Sages

There exist further tales in the cycle, known as the Continuation of the Sept Sages, not described by Ward, but related to the above. Harley MS 4903, also recently digitised, contains the second part of this text:  the first part is in Paris, BnF ms francais 17000. The tales are broadly grouped around the character of Cassidorus, Emperor of Constantinople, and the ones in the Harley volume are Helcanus (the concluding part), Peliarmenus and Kanor. Helcanus is the son of Cassidorus and Peliarmenus is brother of the emperor, who tries to get rid of his nephew in order to rule by himself. Dyalogus throwing Cassidorus’s children into the river; Dorus is rescued by a fisherman; an unidentified coat of arms in the margin, at the beginning of the Roman de Peliarmenus, France, Central (Paris), 2nd quarter of the 14th century, Harley MS 4903, f. 16r

The tale of Peliarmenus ends with the death of Cassidorus. The Roman de Kanor begins with a lion, an old friend of Cassidorus, taking his four sons, one of whom is Kanor, to a hermitage to be raised by a hermit named Dieudonne, and Nicole, a servant of their mother, the Empress for seven years then educated at the court of the King of Hungary. There are several sub-plots involving firstly Celydus, illegitimate son of Cassidorus who becomes King of Jerusalem, and secondly Nero, son of the Empress Nera, switched at birth with the child of a monk, and later switched with Libanor, son of the Queen of Carthage. One of them (it is hard to tell which) becomes Emperor of Constantinople and Kanor eventually becomes Emperor of Rome! 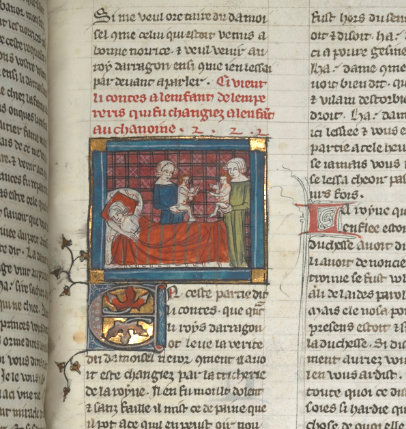 The empress’s baby and the monk’s baby being switched at birth, from the Roman de Kanor, France, Central (Paris); 2nd quarter of the 14th century, Harley MS 4903, f. 171r

This collection of disparate and convoluted tales is not always easy for a modern reader to interpret, but it contains representatives of the narratives and tropes that have characterised human storytelling from the very beginning and across all cultures: the wicked stepmother, children brought up by an animal, babies swapped at birth, hermits and emperors. Many of these would have been familiar to a medieval audience and still are today.