Instructions about cooking and baking are not rare in medieval manuscripts. We have already posted on this blog some medieval instructions for 'cury' and making pancakes from cookbooks or practical culinary collections. Liturgical service books, however, are probably not the most obvious sources for such notes. 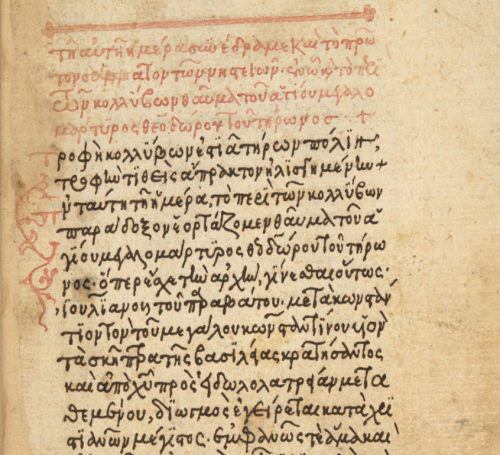 One of our Byzantine Greek service books, a collection of lessons for the Saturdays and Sundays of Lent, contains a very special recipe: not only is it completely vegan, it is said to have been received directly from Heaven. The short note is preserved in a lection for the first Saturday of the Great Lent which records the miraculous revelation of the new recipe as follows. 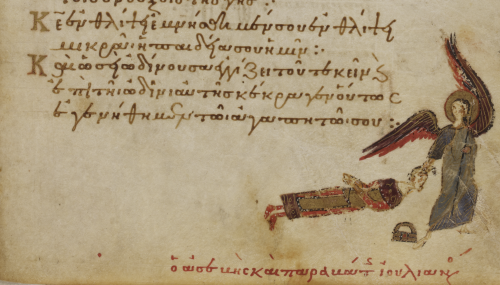 'When the Emperor Julian, who ruled the Roman Empire after Constantine the Great, returned to his old pagan habits, he decided to defile the Great Lent of the Christians, and ordered the mayor of Constantinople to pollute all the food in the markets of the city with animal blood. While imperial soldiers were spreading blood throughout the markets of Constantinople, God sent the martyr Theodore the Younger (who died about 50 years before Julian) to the archbishop of the city to reveal to him the Emperor’s plans.' 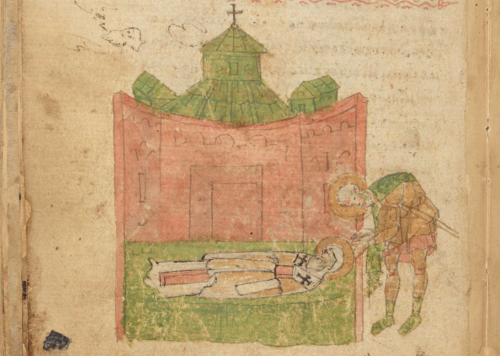 St Theodore comes to the archbishop in a dream and tells him about koliva, Egerton MS 3157, f. 20r

'Hearing about the pollution of the food in the markets, the Archbishop was terrified and asked the saint: “So what can we eat then?” “Koliva,” replied Theodore. “What an earth is that?” asked the surprised archbishop. “Koliva is wheat kernels boiled soft and sweetened with honey, sesame seeds, almonds, ground walnuts, cinnamon, pomegranate seeds, raisins and anise.' When the archbishop inquired who is the provider of the new recipe , his visitor simply answered, 'I am Theodore the Martyr of Christ whom he has now sent to you to reveal this and provide new food for his people.' 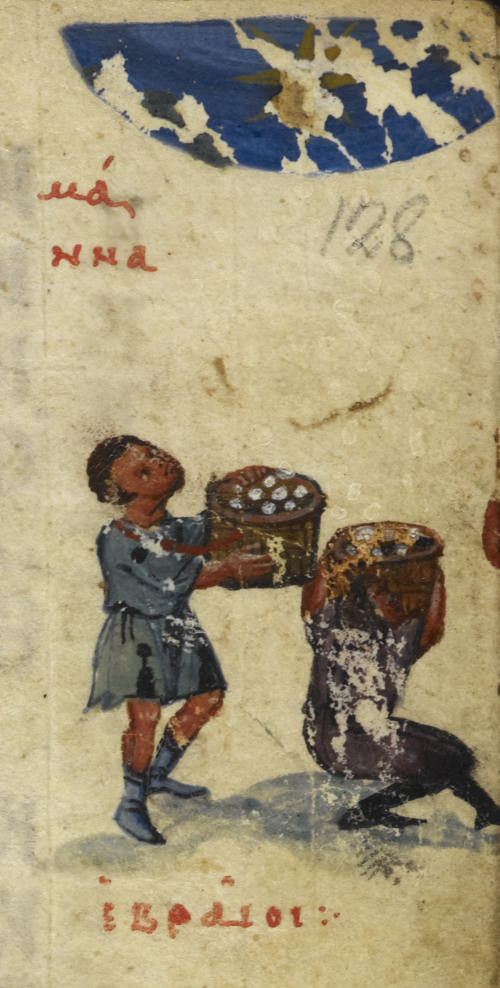 The archbishop immediately announced the new discovery to the inhabitants of Constaninople, who successfully overcame Julian's machinations. To this day, people remember the martyr and this miracle with cooking and eating koliva.

Admittedly, the heavenly origin of koliva is often doubted. In some versions of the story, Theodore simply shares an old recipe of his home country in Pontus with the archbishop. Some say the recipe derives from the ancient Greek cult of Dionysos. Wherever it comes from, the koliva is a very tasty and entirely vegan food. As this Saturday is the anniversary of the miraculous recipe, it might be the right time to give koliva a try (see a detailed recipe here) and remember its source, the martyr and the British Library’s 14th-century manuscript that preserved its story.