England and France 700-1200: Franco-Saxon Manuscripts in the Ninth Century

The British Library and the University of Leicester invite applications for an AHRC-funded PhD studentship on ‘Franco-Saxon manuscripts in the ninth century’. The project is offered under the AHRC Collaborative Doctoral Partnership programme, and will be co-supervised by Joanna Story, Professor of Early Medieval History at Leicester, and by Dr Kathleen Doyle, Lead Curator of Illuminated Manuscripts at the British Library. This full-time studentship, which is funded for three years at standard AHRC rates, will begin on 1 October 2017, and will be based at the British Library in London. 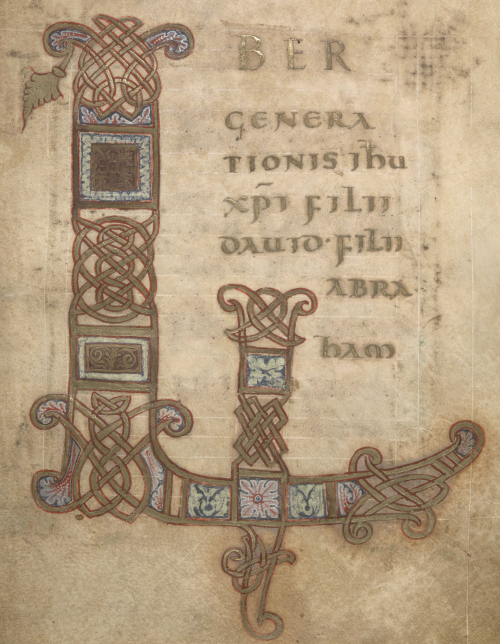 A decorated initial in a Franco-Saxon gospelbook, Tours, 2nd half of the 9th century (British Library Add MS 11849, f. 27r)

The successful candidate will undertake a PhD thesis on Franco-Saxon Manuscripts in the Ninth Century that centres on analysis of illuminated manuscripts produced in northern Francia. Manuscripts held at the British Library will be central to this project.

In the later 9th century monasteries in the Pas de Calais, at Saint-Amand, Saint-Bertin (Saint-Omer), Corbie and Saint-Riquier, produced manuscripts that are characterised by the use of a highly distinctive style of ‘Franco-Saxon’ illumination. These monasteries were places of great power, wealth and patronage in the 9th century, and were ruled by abbots who had close links to the Carolingian court. Proximity to the Channel coast, and to the trading emporium of Quentovic (Étaples) — which lay not more than a day’s ride from both Saint-Riquier and Saint-Bertin — meant that there were also longstanding political, cultural, economic and religious connections with Anglo-Saxon England. These links to places and people of power are made manifest in the deluxe manuscripts that were produced in these monasteries in the later 9th century, which combined the measured aesthetic of Carolingian epigraphic display scripts with an idiomatic use of Insular decoration.

The project offers the opportunity both for detailed historical research and direct engagement with early medieval manuscripts that may also reveal connections between England and France through their texts, decoration, script and methods of manufacture. The project will focus on books in the British Library, and on those codices that exemplify the Franco-Saxon style housed in London and elsewhere. The successful student will work with the supervisors to develop the project in ways that complement and extend the student’s existing skills-set and interests.

This AHRC collaborative studentship arises from a new international digitisation initiative, funded by The Polonsky Foundation, to digitise 800 illuminated manuscripts relating to ‘England and France, 700–1200’ that are held at the British Library and the Bibliothèque nationale de France (BnF) in Paris. That digitisation project creates unique opportunities for the successful candidate to this studentship competition, via training and outreach opportunities (e.g. writing catalogue entries, manuscript descriptions, blog-posts), and by examining aspects of the art history, codicology, palaeography and historical context of production and patronage of relevant manuscripts held at the British Library, and potentially also in Paris.

We are seeking to recruit a highly promising student who will relish the opportunity of combining academic research with the experience of working as part of a professional team of curators and researchers. This studentship is likely to appeal to individuals with a background in early medieval history, book history, literature and language, classics, or in applying interdisciplinary methods for understanding early medieval material culture. Prior experience of research using early medieval manuscripts will be an advantage, and the successful applicant will be able to demonstrate skills commensurate with career stage in relevant medieval and modern languages and palaeography. A commitment to communicating the results of research to a wider public audience is a key asset in the context of the British Library’s digitisation and exhibition programmes.

Subject to AHRC eligibility criteria, the scholarship covers tuition fees and a grant (stipend) towards living expenses. The national minimum doctoral stipend for 2017/18 has been set by Research Councils UK at £14,553. In addition the student has access to up to £1,000 per annum from the British Library for research-related costs, and to Student Development Funding (equivalent to an additional 6 months of funding per studentship) to allow time for the student to take up further training and skills development opportunities that are agreed as part of the PhD programme. The student also will benefit from staff-level access to the British Library’s collections, expertise and facilities, as well as from the dedicated programme of professional development events delivered by the British Library in tandem with the other museums, galleries and heritage organisations affiliated with the Collaborative Doctoral Partnership scheme.

Further information about this collaborative research project (including academic and eligibility criteria), and full details on how to apply can be found in the further particulars, here: http://www2.le.ac.uk/departments/history/postgraduate/collaborative-doctoral-award-opportunities.

Informal enquiries about this collaborative project can be sent to Professor Joanna Story: js73@le.ac.uk