Medieval depictions of the Crusades

The Levantine Crusades, military campaigns with the avowed purpose of capturing Jerusalem and the Christian holy sites in the Near East, took place between 1095 and 1272 or 1291. Long after the Crusader states fell, however, they loomed large in the imaginations of medieval writers and artists, who widely copied and illustrated accounts of the Crusades. 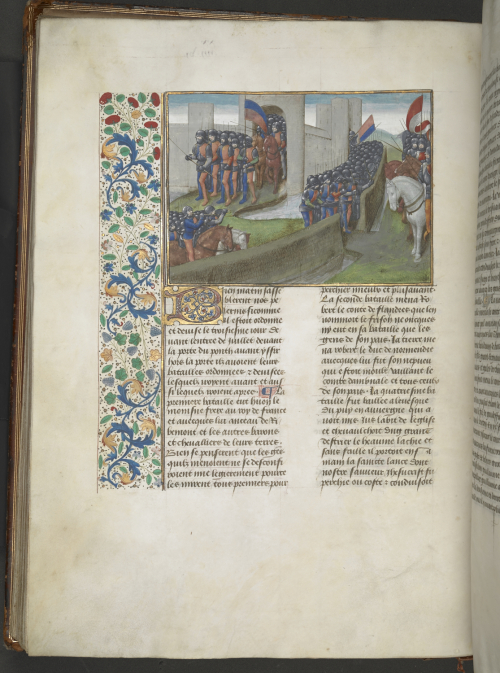 The British Library holds a series of manuscripts created in areas controlled by the Crusaders. The Crusaders established four kingdoms in the Holy Land, one of which, the Kingdom of Jerusalem, was ruled over by a series of descendants of the first ruler, the Frankish knight, Godfrey of Bouillon. From 1131–1143 the Kingdom was ruled jointly by Fulk and Melisende, for whom the gorgeous Melisende Psalter was probably made. 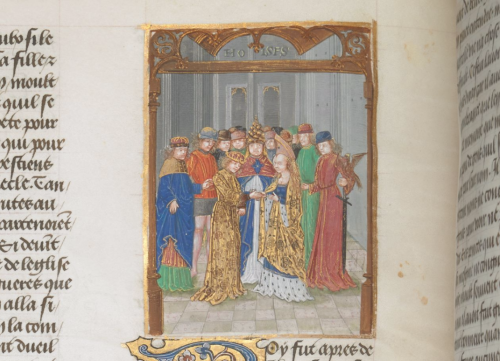 The Library also possesses a missal, a sacramentary and a copy of the Histoire universelle, all of which may have been made in Acre, the Crusaders' last stronghold in the Levant. It is worth focusing on depictions of the Levantine Crusades in later manuscripts. Two later manuscripts with vernacular accounts of the Crusades have recently been digitised: Royal MS 15 E I and Egerton MS 1500. These show how the Crusades continued to capture the imagination of western writers and artists. 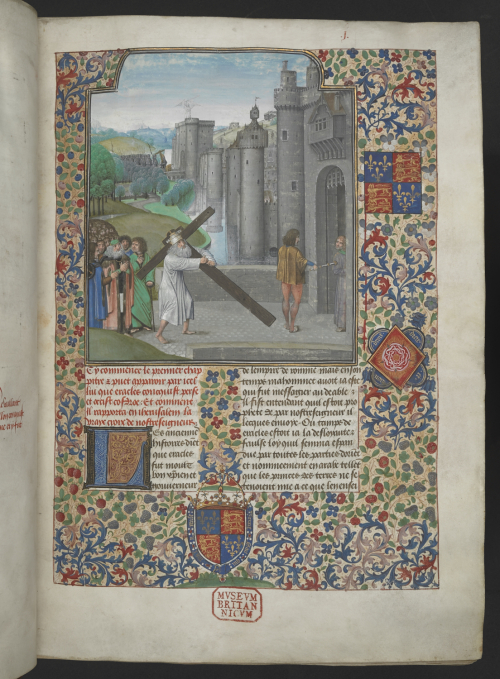 Royal 15 E I, from which the preceding images are taken, contains over 50 miniatures, illustrating the Histoire d’Outremer. Outremer was the name given to the Holy Land and the Crusader states established there. It is a French version of the 12th-century Latin chronicle of William of Tyre (c. 1130–1186), who was born into a Crusader family in Jerusalem, educated in Europe and later became Archbishop of Tyre, in what is now Lebanon. 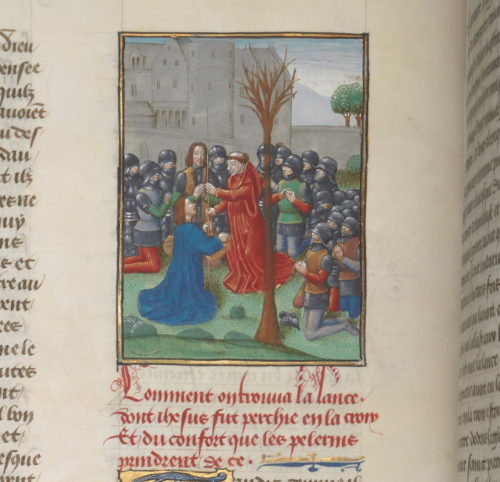 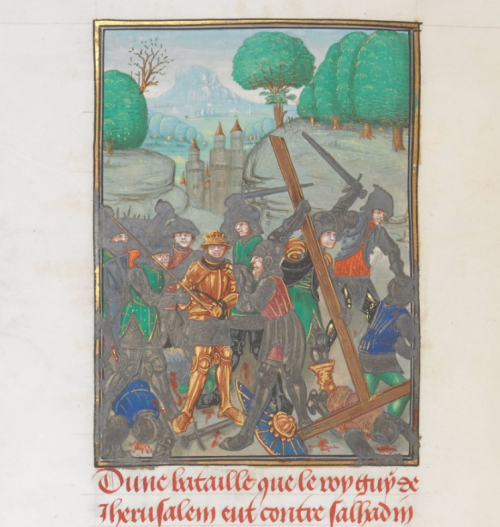 This manuscript is believed to have been made for King Edward IV of England in Bruges in 1479–80. It illustrates key events in the narrative. These include Pope Urban II preaching in 1095, which was credited with inspiring the First Crusade; the discovery of the relic of the Holy Lance; and even the fictional depiction of the loss of the True Cross in a battle against Saladin’s armies. 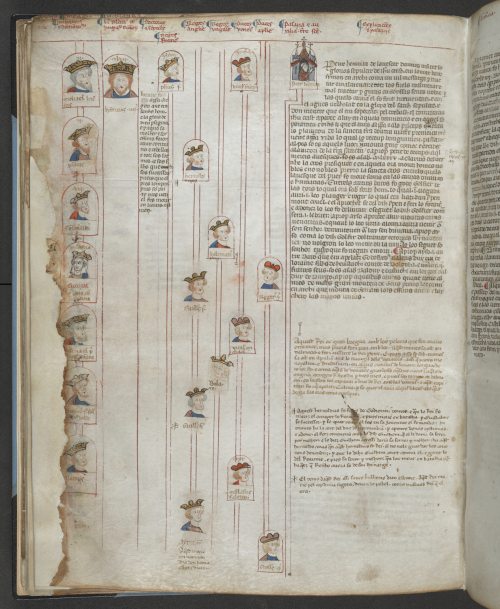 While William of Tyre's text and its translations exist in various copies, Egerton MS 1500 is unique in the British Library collections. It contains the Abreviamen de las Estorias in old Occitan or Provençal (the medieval dialect of southern France), and was copied in Avignon between 1321 and 1324. Each page consists of synchronic tables with images of emperors, kings, dukes and popes. The page above, covering the period of the First Crusade, includes the Emperors Michael Bringas and Isaac Comnenos who ruled from 1056 to 1059, the Holy Roman Emperor Henry IV (r. 1057–1084), King Philip I of France (r. 1052–1108) and Duke Vitale Faliero of Venice. The King of England is ‘Hernold Nepos’ (King Harold, killed at the Battle of Hastings in 1066), followed by ‘Guillelmus I’ (William the Conqueror), and his sons William II and Henry I (r. 1100–1135). On the right under the rubric Pasazia et auxilia terre sancta is an image of Peter the Hermit, who was credited with leading thousands of mostly paupers on the ‘Peoples’ Crusade’ at the end of the 11th century. 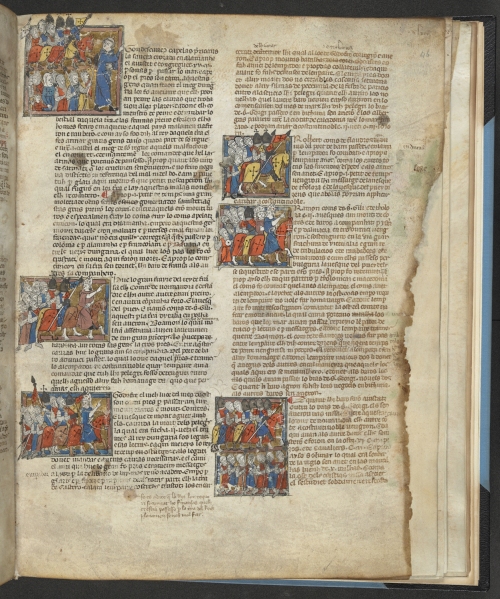 Folios 45v–53v contain an account of the First Crusade, 'Passazia et auxilia Terre Sancte', inserted between the tables. Each paragraph of the text is accompanied by an image of Crusader knights on horseback, mostly led by churchmen. There is a plan of the walled city of Antioch, with the royal line of the Crusader King Baldwin beside it. 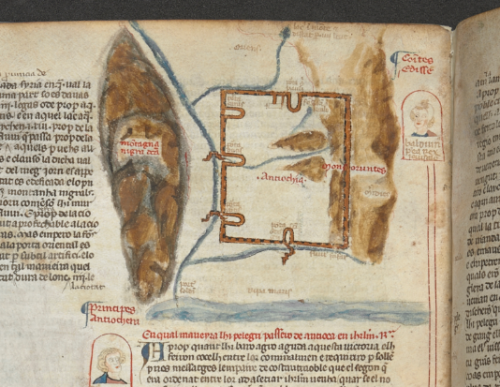 The account of the Crusades ends with a description of the reigns of Godfrey, who was styled protector of the Holy Sepulchre, and Baldwin, King of Jerusalem, and a map of the Holy City. On the following page the almanac continues, including the rulers of the Crusader states, Roger and Tancred. 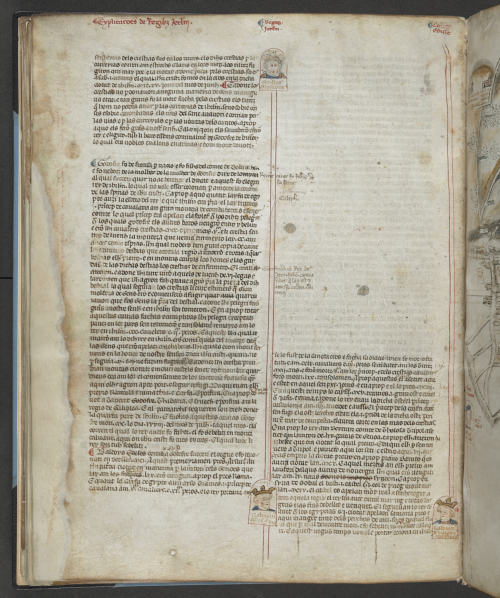 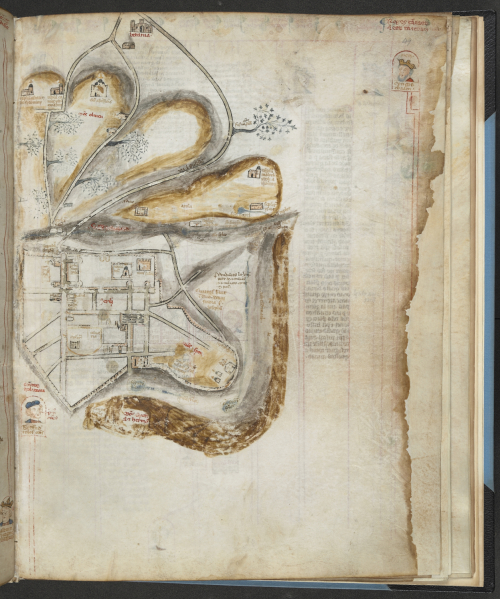 Later depictions of the Crusades are already online on our Digitised Manuscripts website. These include a copy of Jean de Vignay's Merveilles de la terre d'outremer, made in Paris between 1333 and c. 1340 (Royal MS 19 D I), and a copy of Chroniques abrégées des Anciens Rois et Ducs de Bourgogne, made in Bruges around 1485–1490 (Yates Thompson MS 32).