‘Virtually all good things [are] contained herein.’ That's how the author of the text known as Omne Bonum described his work. Omne Bonum is a huge encyclopedia, whose compiler (and scribe), James le Palmer, sought to compile all the knowledge of his time, arranged alphabetically for the use of ‘simple individuals who wish to seek out the precious pearls of learning’. There are 1350 entries arranged under the 23 letters of the medieval Latin alphabet, with each letter comprising a book. Over 750 of these entries are accompanied by historiated initials. The 1094 pages are divided into two volumes, held at the British Library and each surviving in two parts: Royal MS 6 E VI/1, Royal 6 E VI/2, Royal 6 E VII/1, Royal 6 E VII/2, all now fully digitised.  The illustrations, a gold mine of visual information about the medieval world, were already highlighted on our Catalogue of Illuminated Manuscripts. The whole manuscript can also be viewed on Digitised Manuscripts, not just the illustrations but the entire text, with all its complex components. 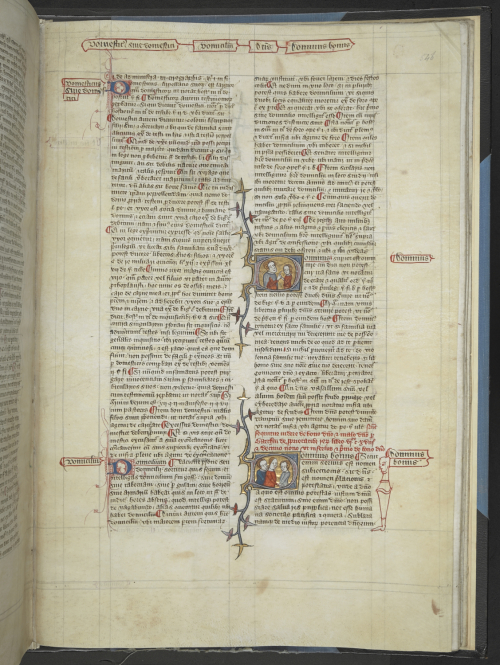 Contents of the Omne Bonum

At the beginning of the first volume is a cycle of 109 tinted drawings, 4 to a page, illustrating all the important Bible stories from Creation to the Ascension of Christ, followed by a short series of visions, including the Vision of Saints Benedict and Paul (see below). The text includes excerpts from Gregory the Great’s Dialogues and Augustine’s De Genesi ad litteram. 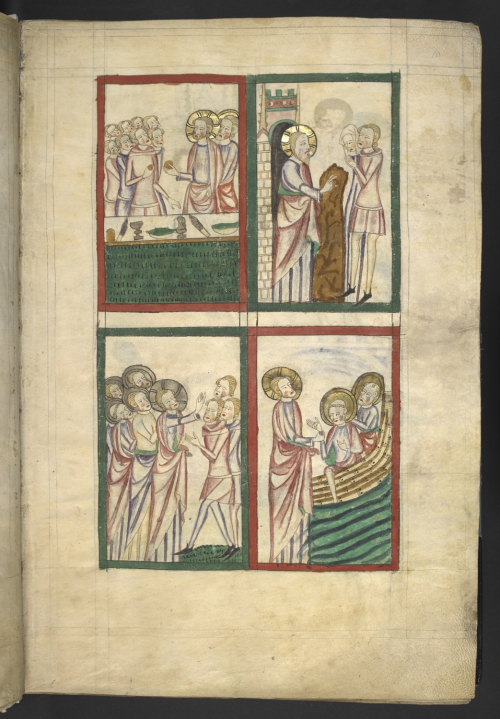 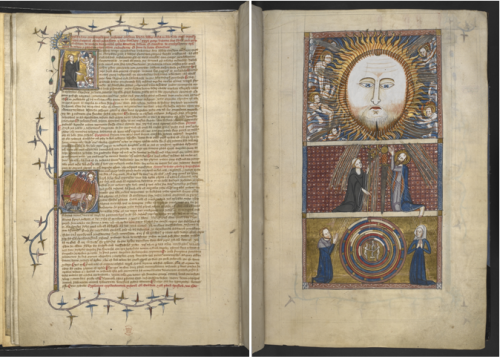 Vision of St Benedict and St Paul: f. 15v: Saint Benedict pointing to the soul of Bishop Germanus being carried up to Heaven (above), the conversion of Saint Paul (below); f. 16r: the face of God in radiance (above), St Benedict and St Paul kneeling (centre), a man and a woman kneeling before a circular diagram of the universe with the Garden of Eden at the centre, from Omne Bonum, England (London); c. 1360-c. 1375, Royal MS 6 E VI/1, ff. 15v-16r

This biblical section is followed by the alphabetical entries, which cover a wide range of subjects:

The first entry, ‘Absolucio’ is typical of many in that the subject is theological and a creative solution has been found to illustrate an abstract concept. The Church hierarchy is portrayed in that the Pope is shown absolving bishops and a priest absolving a layman. In the accompanying text, priests are warned against demanding excessive penance when absolving members of their flock. 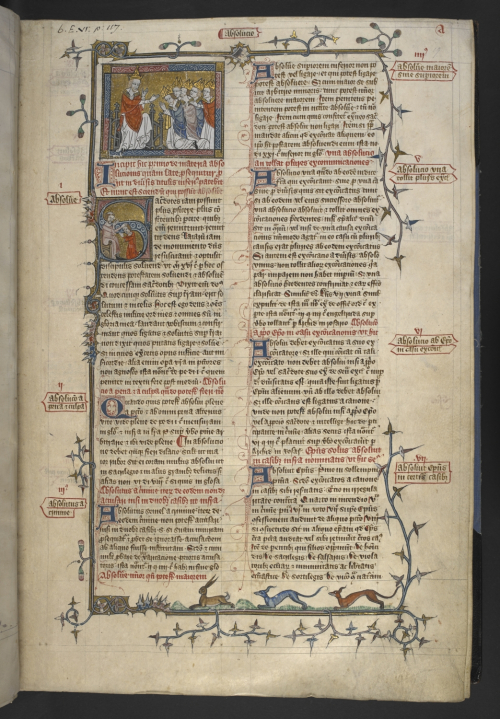 Though there is a focus on theology, church history and hagiography, reflecting the main concerns of the 14th-century author, a wide range of subjects is covered, including:

This example of a legal argument taken from Hostiensis or Henry of Segusio’s Summa is of ‘accidental mishap’, whereby a monk who carries a sword to defend himself against pagans cannot help it if he happens to kill a pagan who he encounters when going about his daily business. The image shows a monk looking extremely pleased with himself, having plunged what appears to be a gargantuan metal object right through the body of an innocent-looking and rather well-dressed young man.  Could this really be termed ‘accidental’ or is ‘fortuitous’ a better description?

Morality and the human condition

Some images bring a wry smile to the modern reader, though the intention of the medieval illuminator was almost certainly not to amuse. Below, a prospective bride who is being given a ring looks extremely dissatisfied with her gift, while the young man seems very pleased with himself.

Science and natural history were also discussed. Some of these entries also had moral purposes, as the devil in the image below stands for the use of astrology for magical or superstitious practices which are condemned, whereas study of the stars is recommended for physicians and farmers, who will put it to good use. The accompanying text is based on the writings of Gratian, one of the many sources included in this compendium of knowledge.

The author also described different animals. In the image below, the puppies are rather cute, with Dalmatian-like spots, but the beaver is a weird hybrid creature with the head and paws of a dog and tail of a fish, reflecting the description in the text of ‘fins and tail like a fish’. 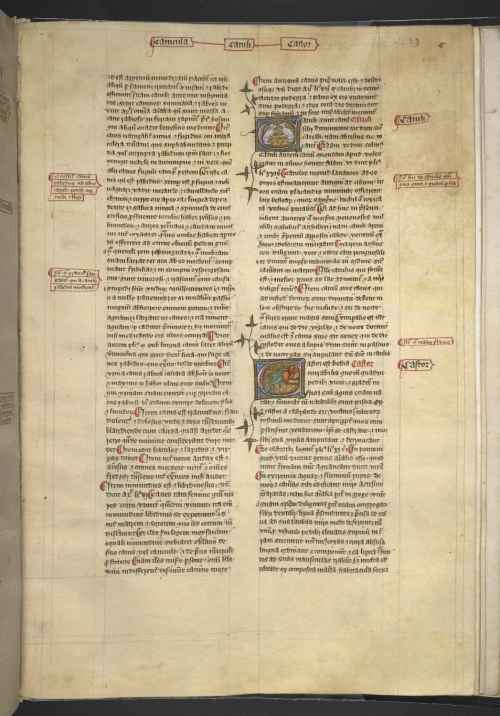 Volume 2 of the set begins inauspiciously, the first entry being Ebrietas (Drunkenness). The image shows six drunken louts misbehaving, one of them being sick on the ground. 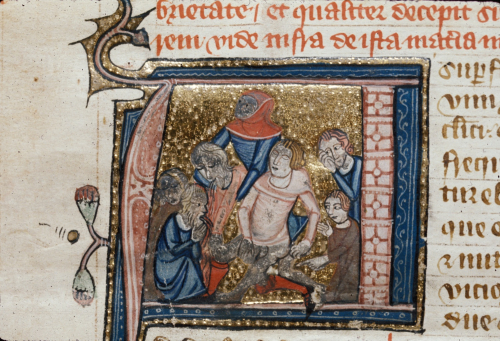 The remarkable compiler and scribe of the Omne Bonum was James le Palmer (b. 1327). He was king’s clerk in the Exchequer from 1359 and was granted a pension by Edward III in 1375.  He did not have time to finish his ambitious work, perhaps as he was trying to compile it in his spare time, and although some illustrations were added by a later owner, the text was never completed. The second volume begins at ‘E’ and there are relatively few entries for letters after ‘M’.

The final entry is Zacharias, with three entries representing three individuals, Pope Zacharias, the father of John the Baptist and the Old Testament prophet, each with a historiated initial. Instructions to the illuminator can be seen in a faint cursive in the margins, but they are not in the hand of le Palmer, and the artist, who was a later contributor, does not follow them closely; for example, in the upper left margin the note reads ‘Sit h[ic] papa & p[ro]ph[et]a’ (Here to be a pope and prophet) but the artist has drawn a pope and a king, illustrating the adjoining text, which tells of Pope Zacharias deposing a French king who was ‘inutilis’. 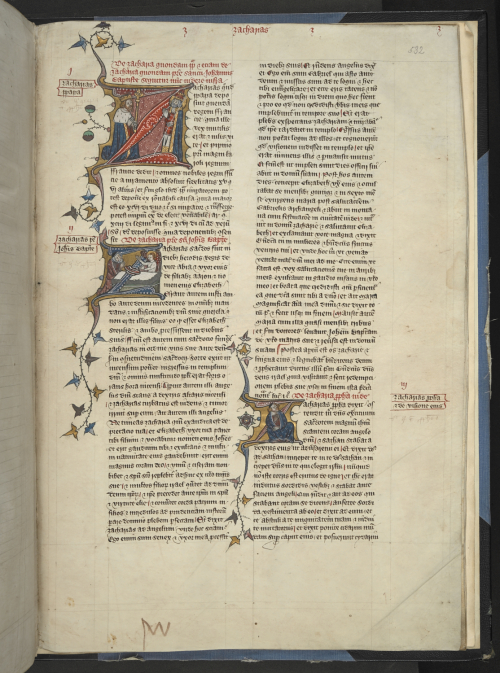 We would like to thank Lucy Freeman Sandler, whose remarkable study and scholarly edition of these unique manuscripts has provided the major source of information for our catalogue entry and this blogpost. For any further information on the author, illuminators, contents and context of this work, we refer our readers to: