In 1932, one of the most sensational discoveries of modern times took place in a country house just outside Chipping Sodbury, Gloucestershire. A local antique dealer, Marmaduke Snodgrass, had been taking afternoon tea with the owner, known to posterity as 'the Barking Baronet', when he spotted an old parchment book wrapped in a pair of flannel pyjamas. Realising this book's huge significance, Snodgrass took it to the British Museum Library in London, where experts identified the manuscript as containing the only surviving copy of the semi-legendary De bestiis ridiculosis.

This manuscript remains in private hands, having been inherited by the Barking Baronet's descendants. The British Library is delighted to be able to issue today the first images of what is now known as the Chipping Sodbury Bestiary. De bestiis ridiculosis is a remarkable text, describing a range of mythical beasts that are rarely found in other medieval bestiaries. 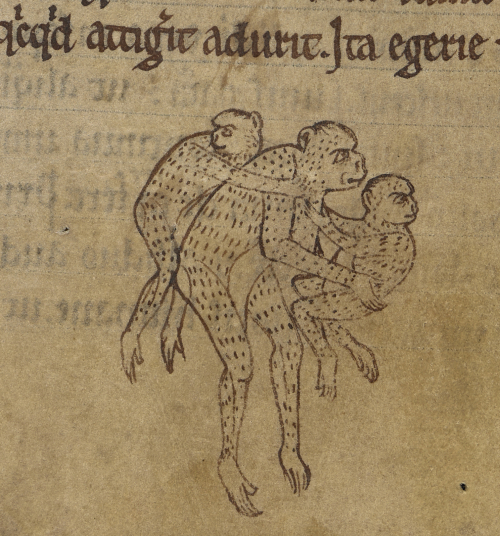 An ape-like creature related to the Yeti and native to jungle regions of the Indian sub-continent. The 14th-century writer Jordanus of Moronicus noted that this creature only emerged from its hidden den on nights of the gibbous moon, in order to gather carambola, also known as starfruit. This line drawing shows a female Gibbous carrying her young. 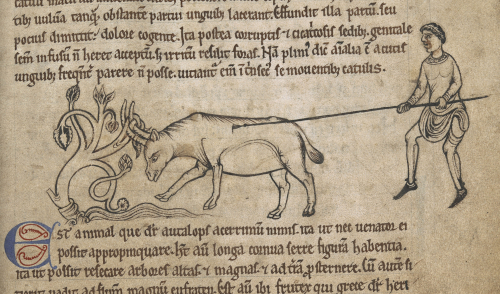 Commonly used by farmers in southern France and Tuscany to snuffle out truffles, the Horned Groundsnoort is a beast with a vicious temper when provoked. The anonymous author of this bestiary prescribes that the farmer should always maintain a safe distance from the Groundsnoort, using a 'snoort-rod' if one is at hand. 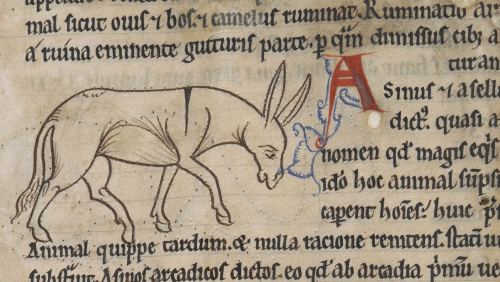 Most asses are a dull grey or brown in colour, but occasionally a golden mutant is born. The Golden Ass has an exaggerated sense of its own self-worth, and refuses to be steered or ridden unless bribed with the famed golden turnip. 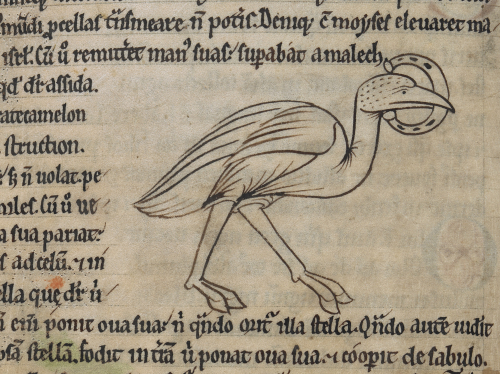 A musical bird native to Timbuktu. During the summer months, the male BoJangle performs popular show tunes on musical instruments as part of an intricate mating ritual to attract females. Here is depicted the male BoJangle holding what seems to be a tambourine.

The Legend of Holyfield The Anglo-Saxon Chronicle relates that, in the year 873, King Alfred the Great of Wessex defended his kingdom from attack by a 'fire-spewing dragon' (OE: fyrdraca), using only his bare fists. The encounter took place near the village of Holyfield, and is commemorated to this day by the drinking of prodigious amounts of 'fire-water' every Friday night. Despite losing his left ear in this battle, Alfred left the field victorious. 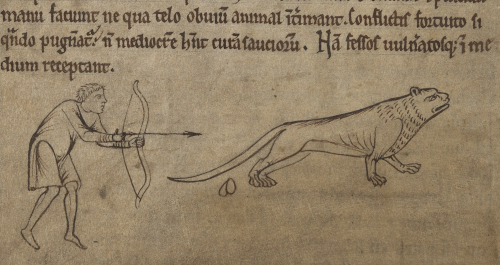 When startled by a hunter, the quonk will lay a pair of eggs, which hatch around the full moon. Quonks are described in De bestiis ridiculosis as among the most noble of beasts, and impossible (and undesirable) to tame.

Half-dog, half-weasel, dweezils have an almost unique ability to smell with their tongues, a feat they share today with the wombat and the spiny echidna. Older readers of this Blog may be familiar with the arcane proverb, 'A dweezil in the hand gathers no moss'. 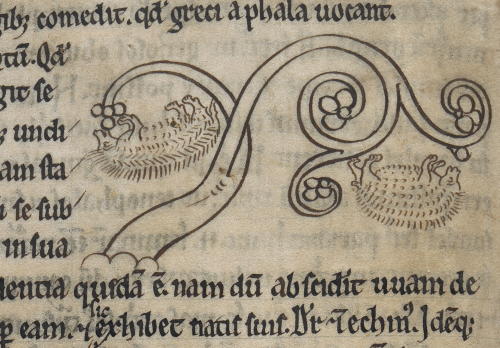 Now extinct over most of its former range, the tree hedgehog was much prized as a delicacy in Roman times. Pliny the Elder was reputedly dining on tree hedgehogs and egret tongues, washed down with bull's milk, when he watched Mount Vesuvius erupting in AD 79. 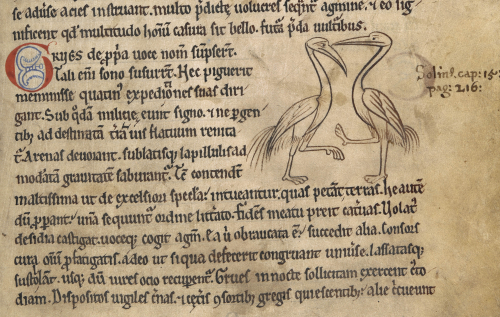 Not to be confused with its more common cousin, the Skating Crane, the Dancing Crane is notorious for breaking out into intricate stepping routines whenever it gets excited. Some ornithologists have compared its dance technique to the Macarena. 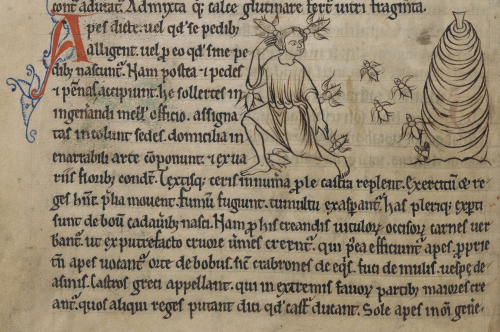 One of the most unpredictable beasts is the Giant Bee of South America. Bee keepers in the foothills of the Andes tell terrible tales of their encounters with these winged creatures, which have the ability to lift a man from the ground before depositing him in a dunghill.

Sightings of the Half-Whit are becoming increasingly rare, no doubt due to global warming and tighter regulation of the local licensing laws. The Half-Whit is distinguished by having two heads (one in the usual place, the other at the end of its tail), and by its unorthodox mating call, likened by experts to the sound of bagpipes crossed with the scratching of nails on a chalkboard.

All images of the Chipping Sodbury Bestiary are courtesy of the descendants of the Barking Baronet. We are extremely grateful to them for kindly giving permission for us to feature this beautiful bestiary on the Medieval Manuscripts Blog. Don't forget to follow us on Twitter (@BLMedieval) for more manuscript discoveries.

This is a wonderful post - great names and descriptors as well as exquisite drawings. I often focus on the bestiary in workshops I lead in schools to encourage writing through art. These are treasures and I seek permission to use a couple in a PowerPoint for classroom use.