It has been a warm few days in London and at the British Library we feel that Spring has sprung. Spring is, of course, a time when it rains sweet rain and little birds stay up all night singing amorous songs. Or so Geoffrey Chaucer (c.1343–1400) would have us believe. And we see no reason to doubt that this is what happens. So, to celebrate the arrival of Spring, we have digitised one of our manuscripts of Geoffrey Chaucer's collection of pilgrims' stories, The Canterbury Tales. In the image below you can see the famous opening lines, which read,  ‘Whan that aprille with his schowres swoote / The drought of marche haþ perced to þe roote’ [When that April with his showers sweet/ The drought of March has pierced to the root'].

The opening of the General Prologue to the Canterbury Tales: Harley MS 7334, f. 1r.

The Canterbury Tales was written at the end of the fourteenth century and tells the story of a group of 29 pilgrims who meet while travelling to the shrine of Thomas Becket in Canterbury. To pass the time on the journey, they decide to each tell two tales to the assembled company on the journey there and the journey home. The result is regarded as a master-work of medieval literature.  The Tales, however, are unfinished. The poem never describes the return journey and not all the pilgrims who appear in the poem's prologue end up telling a tale. The prologue describes a plowman among the company, for example, whose tale is nowhere to be found. The poem survives in 92 manuscripts -- some of them only tiny fragments and others beautifully decorated masterpieces. Yet none of these manuscripts date from Chaucer's lifetime. Trying to work out what Chaucer intended has been a headache for editors for over a century.

The number of pilgrims' tales and their ordering differs between the copies, so debate continues to swirl concerning the relationships between these manuscripts. The manuscripts do not only vary in the order of the stories included: some copies include additions that were not Chaucer's work. Both Harley MS 7334 and Harley MS 1758 include the 'Tale of Gamelyn' as a conclusion to the 'Cook’s Tale', which breaks off after only 58 lines in most copies. Someone was evidently uncomfortable with such untidiness, and made an attempt to tie off the loose ends. 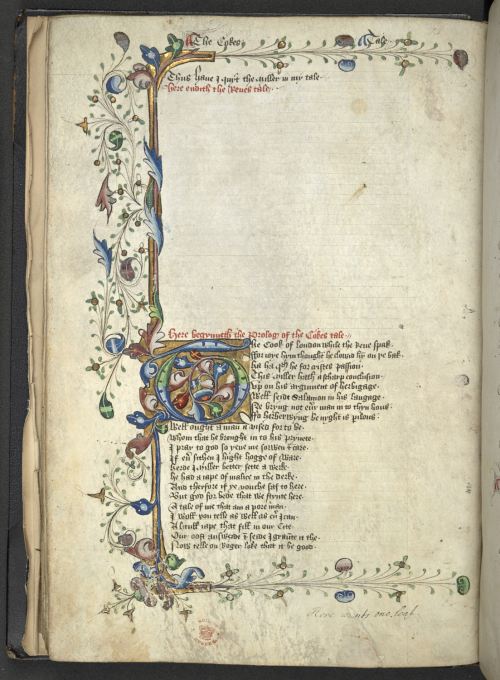 Some people have argued that the Canterbury Tales is intentionally unfinished, that Chaucer deliberately left such hanging ends, to encourage readers to engage with their own tales. Whatever the truth might be, it did not dampen the work’s popularity. Chaucer died in 1400 and in the century after his death he was celebrated by poets like Thomas Hoccleve (c. 1368–1426) and John Lydgate (c.1370–1450), who wrote about him as the father of English literature. One of the earliest portraits of Chaucer appears in a manuscript of Thomas Hoccleve’s Regiment of Princes, Harley MS 4866, which is now online. 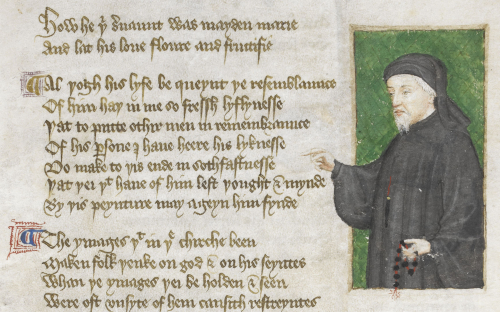 John Lydgate was such a super-fan of Chaucer that in his poem, The Siege of Thebes, he imagines himself bumping into the Canterbury Tales pilgrims on their road to Canterbury. 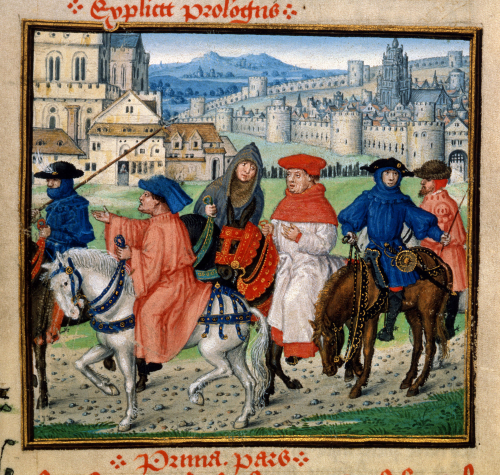 The Canterbury Tales was among the first books to be printed in English. William Caxton printed the Tales in 1476 or 1477. It appears to have sold well — he brought out a new edition in 1483, complete with woodcut images of the pilgrims. Both versions are available for comparison through the British Library's Treasures in Full website.

After the Reformation, the incompleteness of the Tales gave later writers an opportunity to reframe Chaucer's work.  A fake anti-Catholic story called ‘The Plowman’s Tale’ was added to The Canterbury Tales and reprinted in various editions of Chaucer’s works throughout the 1540s and 1560s. This gave some people a rather odd idea about Chaucer's intentions. The protestant historian John Foxe (1516/17–1587) wrote in his Actes and Monuments that by reading Chaucer, people in a bygone age were ‘brought to the true knowledge of Religion’.

Recent years have produced a trove of riches for those studying the Canterbury Tales. The most highly regarded manuscripts of the work, the Hengwrt Chaucer and the Ellesmere Chaucer, are already online. These are believed to have been written by Adam Pinkhurst, a scribe who knew Chaucer personally. But there is still more to learn about the text beyond these two books and we hope that by making another manuscript available digitally, more discoveries might be made.

Posted by Ancient, Medieval, and Early Modern Manuscripts at 9:15 AM