How our ancient trees connect us to the past

Some of the most stunning creations of the Middle Ages are still alive. Britain is dotted with trees planted hundreds of years ago, with over 120,000 listed in the Woodland Trust’s Ancient Tree Inventory. Some of them are over a thousand years old. This year, organisations across the United Kingdom have created a Tree Charter, which seeks to recognise the importance of trees to our national life. This charter harks back to a very important medieval document, the Forest Charter, which was originally issued in the name of King Henry III of England (1216–1272) on 6 November 1217. 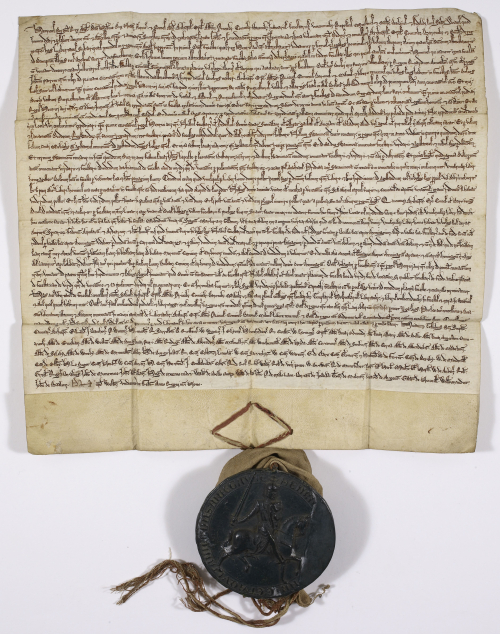 The Forest Charter can be thought of as the younger sibling of Magna Carta. One of its primary aims was to regulate royal forests, which had been created by William the Conqueror and covered around a quarter of England during the 12th and 13th centuries. Today, we think of forests as lands covered with trees, but in the 13th century royal forests also included pastures and even villages – indeed, almost the entire county of Essex was declared a royal forest. From our perspective, this move to make huge swathes of land into royal forests seems remarkably forward-thinking. We might think that in doing this William was seeking to preserve England's trees, but he had a specific purpose for his conservation effort: he wanted lands for the crown to hunt wild animals and game, particularly deer.

Animals romping in the margin of a manuscript of the works of Gerald of Wales: Royal MS 13 B VIII, f. 10v.

To regulate these vast tracts of land, a special ‘forest law’ was created to promote their use as royal game preserves, enforced by a small army of foresters. In theory, they could impose enormous punishments on offenders, up to capital punishment. In practice, they normally issued fines, making the forest an important source of income for the crown.

The barons living under this rule took issue with the 'forest law'. They drafted the Forest Charter, which sought to scale back this law (translation from The National Archives):

The charter further rolled back the area of the forests to their boundaries at the beginning of the rule of King Henry II in 1154, where the lands could be shown to have been taken wrongfully. (Henry II had vigorously expanded the forest borders, to the point of creating hardship.) Crucially, the charter also sought to expand common access to the forests. In this period, people relied on areas of woodland to provide fuel for heating and cooking, as well as pasture in which to graze livestock. The Forest Charter, therefore, had important implications for common people.

The charter was repeatedly confirmed as part of English law. It was in association with the Forest Charter that the name ‘Magna Carta’ was first used, to distinguish it as the large charter as opposed to its littler (and later) sibling. The British Library’s copy of the charter is a reissue from 1225, and appears to have narrowly escaped destruction.

The Forest Charter represents a pragmatic approach to define the value of forests and ensure that they can be accessed as a resource crucial to the everyday functioning of society. Aspects of this approach are still valuable, such as in attempts to calculate the natural capital of forests in economic terms. The story of the royal forests are also the subject of a new book to be published next month by the Royal Botanic Gardens at Kew, entitled Ancient Oaks in the English Landscape.