Which Renaissance playwright killed an actor in a duel? Which Tudor poet narrowly escaped the executioner's block for an alleged affair with Anne Boleyn? Which 17th-century writer was reputedly a 'great visitor of ladies'?

You can find answers to these and other questions on the new Renaissance module of the British Library’s Discovering Literature site. From espionage and imprisonment to a secret marriage and an untimely death, the site allows you to uncover the colourful lives and works of key poets and playwrights including John Donne, Ben Jonson, Christopher Marlowe and John Webster.

On the site you can find out more about the scandalous life and ignoble death of Christopher Marlowe (1564–1593). Marlowe wrote seven plays and three poems in a brief period in his 20s, before he was killed in a brawl, on 30 May 1593, at the age of 29. Earlier that month, Marlowe had been arrested and charged with heresy. The case against him was supported by the testimony of the double agent and informer, Richard Baines. You can see the document in which Baines makes damning accusations that Marlowe was an ‘Atheist’ with too much love for ‘Tobacco & Boies [boys]’. (Those words are visible in the 4th line of the image below.) 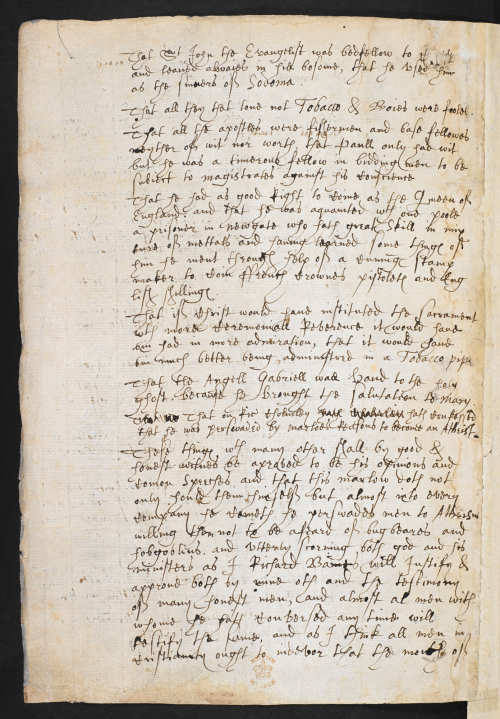 Also on the site, you can read about a manuscript notebook compiled by Sir Walter Ralegh (1554–1618) during his imprisonment for treason in the Tower of London. In July 1603 Ralegh was arrested for his alleged involvement in a plot against the new king, James I (r. 1603–1625). He would spend 13 years in incarceration, during which time he wrote several prose works, including the History of the World (1614), and this notebook  contains his research for that work. On the final page is one of Ralegh's poems, written in his own hand, which has been identified as one of the ‘Cynthia poems’, in praise of Queen Elizabeth I. His fortunes had taken a turn for the worse since the accession of James I, so the poem of praise addressed to the now-dead queen is an intriguing addition to the notebook's final pages. 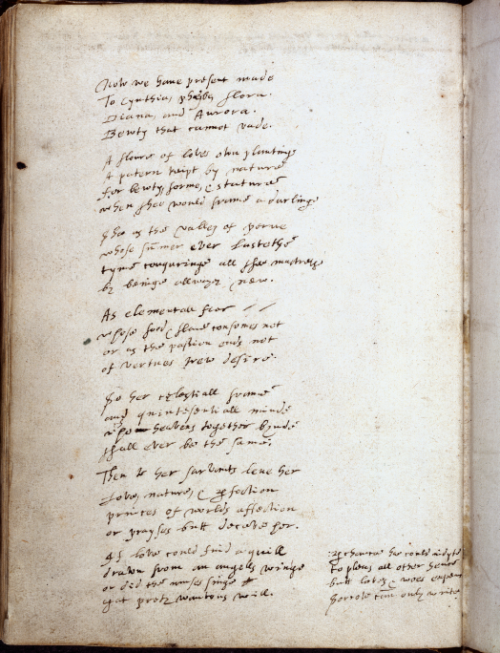 The last page of Raleigh’s notebook, containing one of the Cynthia poems, ‘Now we have present made’ which he addressed to Queen Elizabeth I, Add. MS 57555, f. 172v

Another writer whose life and work you can discover more about is Sir Thomas Wyatt (1503–1542). Wyatt was a diplomat, courtier, poet and possibly a murderer. The opening lines of one of his poems reads, 'What wourde is that that chaungeth not/Though it be tourned and made in twain?'. The lines mean, ‘what word is there that does not change, even when it is turned and cut in half?’ Wyatt’s point is about how words can be turned and changed easily. He knew this better than many. In May 1534 he was imprisoned after a fight he was involved in resulted in the death of one of the sergeants of London. The circumstances of the fight are unclear and we can only speculate on what words were said — or turned — to lead to the death of a man.

Wyatt spent his adult life in the court of Henry VIII. This was an environment of intrigue and danger, where words could turn, and turn against you. On 5 May 1536, he was arrested and sent to the Tower of London on charges of treason. There were rumours that he had had an affair with Anne Boleyn. On the 17th of that month, Anne’s supposed lovers were executed at the Tower. Wyatt may have seen their deaths from his cell window. In the end, he escaped their fate and was released from the Tower.

There are several manuscripts containing Wyatt's poems which survive, but the British Library holds arguably the most important one, Egerton MS 2711, which contains around 100 of his poems. This is the key manuscript because some of the poems are written in Wyatt’s own hand and he has gone through the manuscript, marking the poems which are his and making changes. In one poem he makes reference to 'her that did set our country in a rore', which some scholars have interpreted as a reference to Anne Boleyn. Intriguingly, however, the line has been revised in Wyatt's hand so that the lines seem to refer to a generic brunette. The altered line reads, 'Brunet that set my welth in such a rore'. 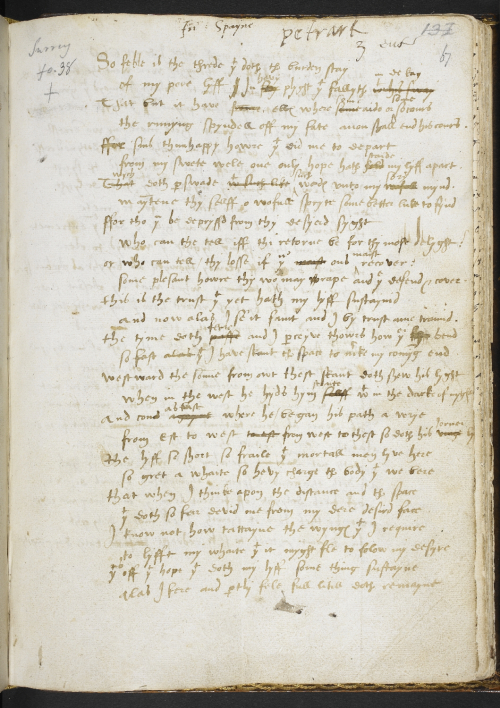 Wyatt’s translation of one of the poems which intersperses the sonnets in Petrarch’s ‘Canzionere’,  Egerton MS 2711, f. 67

Another writer who was also imprisoned more than once in his lifetime was the poet and playwright Ben Jonson (1572–1637), who was a contemporary of Shakespeare. In September 1598 Jonson killed the actor Gabriel Spencer in a duel. He only escaped being hanged by reciting Psalm 51 (colloquially known as ‘neck verse’), a loophole in the law available to anyone who could read. In 1605 he was imprisoned again, this time for contributing to the comedy Eastward Ho, which was deemed offensively anti-Scottish by the new king, James I (James VI of Scotland). Jonson wrote that he feared execution yet again and recounts a story of his mother preparing poison for him to make his death less painful.

Jonson was released and returned to royal favour, writing entertainments for the monarch, including the Masque of Queenes, written in 1609 and performed at Whitehall Palace in honour of Henry Stuart, Prince of Wales (1594–1612), the king's eldest son. 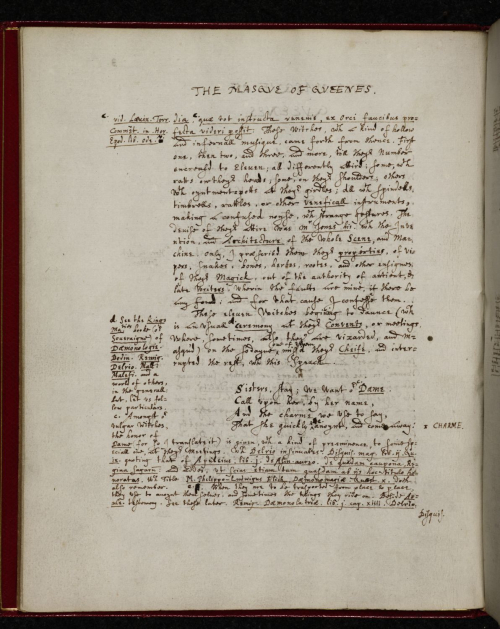 Manuscripts like these are a window into the literary culture of Renaissance England. This was an environment in which poems often circulated in manuscript form rather than being printed. On the Discovering Literature site you can find out more about the enigmatic Devonshire Manuscript, compiled by various noblemen and ladies in the Court circle of Henry VIII and the richest surviving record of early Tudor poetry and the literary activities of 16th-century women. 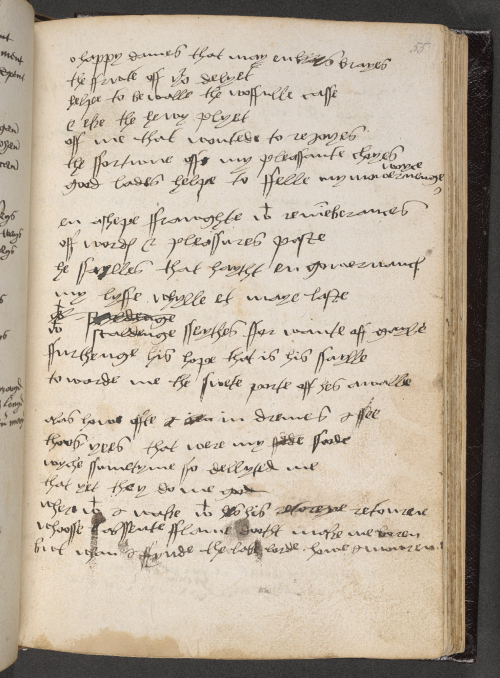 Another poet whose poetry was circulated in manuscript form was John Donne (1572–1631). Donne was famous in his own day for his sermons, which are rhetorical masterpieces largely written when he was Dean of Saint Paul's in London. Today he is more famous as a poet who wrote complex, cryptic and often erotic verse. In his youth, Donne had a reputation as a womaniser. One of his contemporaries wrote that he was 'a great visitor of Ladies, a great frequenter of Plays, a great writer of conceited Verses'. When he did marry at the age of 29, it was in secret. In 1601 he wed the niece of his employer, Sir Thomas Egerton. Egerton was horrified that one of his juniors had presumed to marry into his own family. Donne was sacked and briefly imprisoned, before he was barred from public office altogether.

On the site you can find articles about Donne and his work, including material about The Newcastle Manuscript, an anthology of verse and prose made for Sir William Cavendish (1592–1676), the first Duke of Newcastle. It includes 98 poems by John Donne and masques and poems by Ben Jonson. 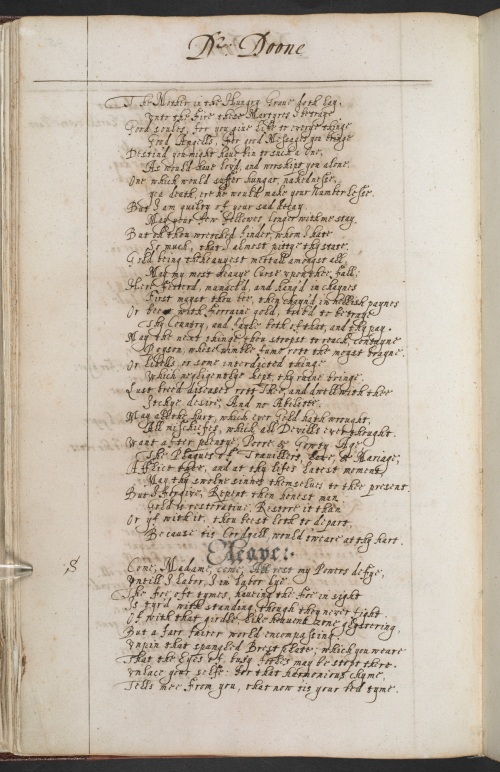 While these manuscripts tell us about the kind of literature that people were reading and copying, we also have links to the only known copy of William Scott’s (c. 1570–1612) The Modell of Poesye. Written in the summer of 1599, it is one of the earliest examples of English literary criticism. It has much to tell us about what people thought about literature itself in this period. 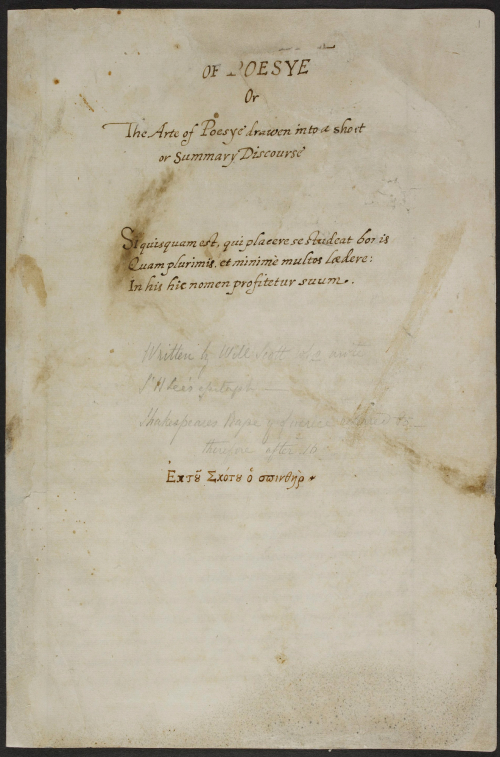 The Renaissance module is the latest phase to be added to Discovering Literature, which will continue to expand in the near future to cover the whole of English literature from Beowulf to the present day.