Digging for the past at Norton Priory

Despite the trail of desolation left by the dissolution of the monasteries in England and Wales beginning in 1536, former monastic sites remain among the most beautiful places to visit in Britain. The Norton Priory Museum and Gardens, thought to be the most extensively excavated monastic site in Europe, has long been known for its spectacular grounds. In August 2016, the museum opened an entirely new building, adding a fascinating interpretation of the site that shows just how much we can understand about the past, even when it appears that little is left on the surface. 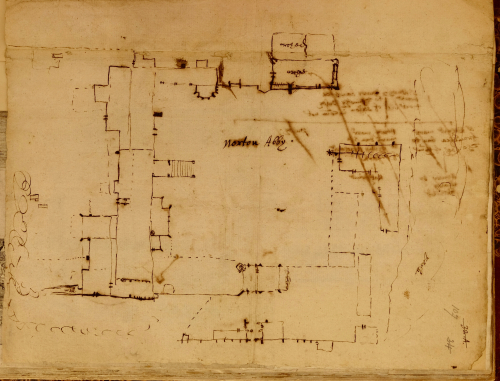 The dissolution of the monasteries in England and Wales was one of the most significant upheavals of British society — it is estimated that one in fifty adult males were in religious orders at the outset of the 16th century, and within a generation these people, their functions, and their lands had to be absorbed elsewhere. Nonetheless, the process of the dissolution is still little understood. Although it has often been thought to have been a decisive blow, executed purely out of the greed of King Henry VIII, the reality is somewhat more complicated and was the result of years of agitation. This is exemplified in a letter of Piers Dutton to Thomas Cromwell, on loan from the British Library and now on temporary display at Norton Priory.

Sir Piers Dutton claimed descent from the same Dutton family that had been a supporter of the priory (and later abbey) since the 12th century, but sought to take control of Norton for his own purposes. The first Act for the Suppression of the Monasteries applied only to houses worth £200 or less, under which Norton fell. It seems unlikely that this could have occurred without falsification of documentary evidence, which Sir Piers could have accomplished as a royal commissioner for Cheshire. 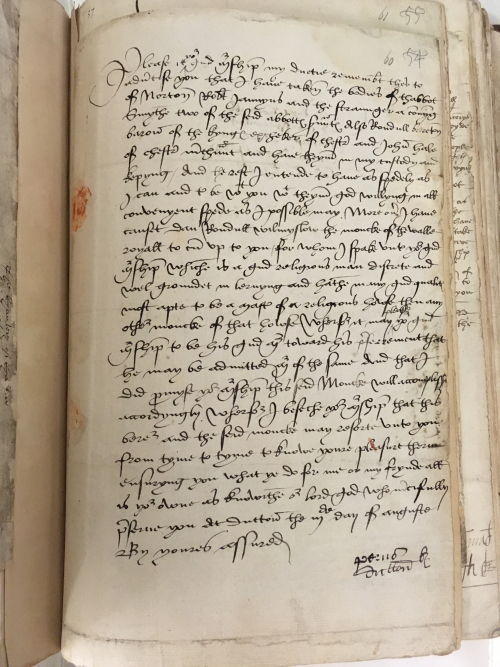 The chronology of the letter has been debated, as Dutton only gives the date as 3 August: it was first published as being from 1534, but has been proposed to be from 1535 or even 1536. Certainly, when it was written, the closure of Norton was not yet finalized. It has recently been emphasized that the initial Act of 1536 should be read as aiming at the reform of the monastic system, and not its total destruction.

Sir Piers writes to Cromwell that he has arrested the abbot of Norton, Thomas Birkenhead, and other canons, though he does not explain why. It may relate to his attempt in 1535 to accuse the abbot of counterfeiting money. Meddling with Norton is not enough: he also seeks to put forward Dom ‘Rondull Wilmyslow’ (or Randulph Wilmeslowe) as abbot of Vale Royal, a Cistercian monastery, after the death of its abbot in 1534 or 1535:

Please it \your/ gud mastership my duetie remember this to aduertise you that I haue taken the bodies of thabbot of Norton Robert Jannyns and the straunger a connyng Smythe two of the seid abbottes seruantes also Randull brereton baron of the kynges excheker of chestre and John hale of chestre merchuant and haue theym in my custody and kepyng⸝ And the rest I entende to haue as spedely as I can and to be with you with theym god wylling in all convenyent spede as I possiblie may. Moreouer I haue causet dan Rondull wilmyslow the moncke of the Valle royall to cum vp to you⸝ for whom I spake vnto your gud mastership whiche is a gud religious man dyscrete and wel groundet in lernyng and hathe many gud qualites most apte to be a master of a religious howse then any other moncke of that howse Wherfore it may \please/ your gud mastership to be his gud master toward his preferrement that he may be admitted master of the same And that I did promyse your mastership this seid Moncke will accomplishe accordyngly. Wherfore I beseche your mastership that this berer and the seid moncke may resorte vnto you from tyme to tyme to knowe youre pleasure therin ensuryng you what ye do for me or my frende all is your owne as knowithe our lord god who mercifully preserue you At dutton the iiide day of auguste By youres assured

He did not achieve his aims: the abbot was cleared of charges, and John Harware (or Harwood) instead became the new abbot of Vale Royal. Sir Piers attempted to have Abbot Thomas executed at the dissolution of the priory, but eventually he became a secular priest, and like other monastics was paid off with a state pension. This letter is a glimpse into the complexity of the often undocumented machinations that surrounded abbeys leading up to their closure.

Norton Priory itself had a tumultuous few centuries ahead of it, but today makes a delightful visit. It is still graced by a splendid 14th-century statue of St Christopher, and the grounds cover nearly fifty acres. The gardens from the monastery and later residents are now kept in top condition. Its new museum is truly innovative, combining cutting-edge archaeological, historical, and even medical research, and presenting it in accessible terms to both young and advanced audiences. We very much hope that you are able to visit Norton Priory, and to see our wonderful document while it is on display until 1 August 2017.

Updated 30 May 2017 to reflect debates surrounding the dating of the letter; thanks to Dr Andrew Abram of Manchester Metropolitan University for pointing out references earlier omitted.