Have you ever lost, forgotten to return or accidentally damaged a library book? If so, you may have been asked to pay a fee to replace or repair the book — but you still got away easy! During the Middle Ages, the fate of both your body and soul could have been at serious risk. Medieval librarians often added curses to their books upon those who did not return or damaged borrowed books, or stole them from their libraries. These curses usually invoked God, suggesting that these punishments would be made effective with divine authority. 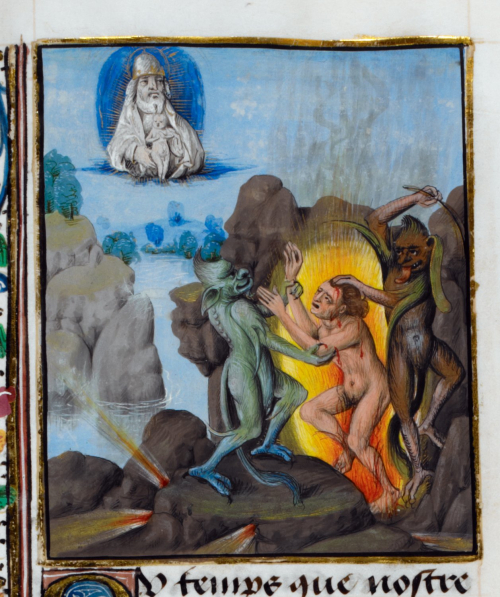 Some book curses guaranteed an immediate, physical punishment. The British Library has recently digitised a Middle Dutch natural encyclopaedia and bestiary (Add MS 11390) that contains a ‘dear oath’ (‘dieren eet’) below an image of a cross, with which the borrower had to swear that he or she would return the book or die. At least one borrower, a woman who identified herself as a midwife (‘Abstetrix heifmoeder’), dared to subscribe to this oath. 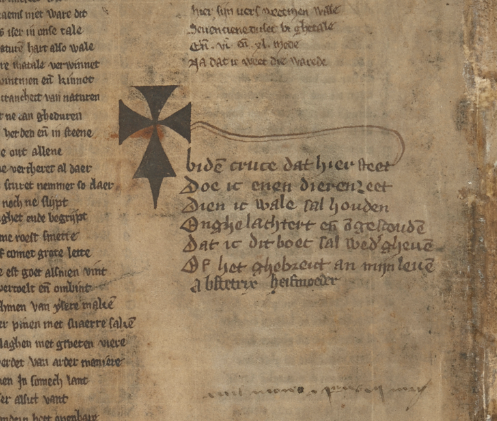 A similar curse is found in a manuscript with a commentary on the Harmony of the Gospels (Royal MS 4 E II) from Evesham Abbey. A colophon that praises the scribe’s work — and requests high-quality wine (‘vini nobilis haustum’) for him as a reward — ends with a curse in which the book’s thief is wished a ‘death from evil things: may the thief of this book die’ (Morteque malorum: raptor libri moriatur). 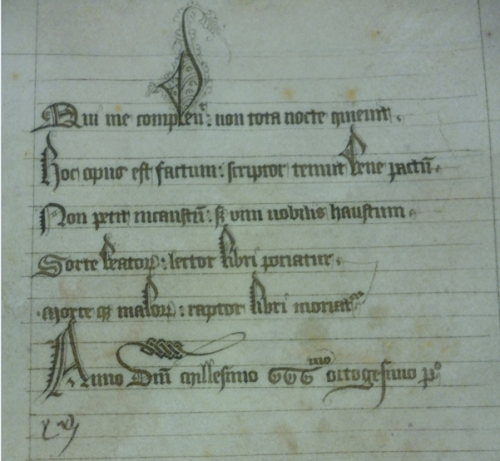 A colophon in which the scribe curses a book’s thief to death, from William of Nottingham’s Commentary on the Harmony of the Gospels, Evesham, c. 1381, Royal MS 4 E II, f. 471r

Other curses give us an insight into how some librarians imagined that the book thieves should die. A quickly scribbled curse in a liturgical manuscript (Add MS 30506) from the church of St Aldate in Gloucester states, ‘This book is of St Aldate: he that takes this book shall be hauled by the neck’ (f. 170r: ‘Thys boke ys sancht audatys; he þat stelys þe boke shall be haulynth by þe neck’). An even more harmful curse was issued by the Premonstratensian abbey of St Mary and St Nicholas in Arnstein. The so-called Arnstein Bible (Harley MS 2798), as noted by Marc Drogin (Anathema! Medieval Scribes and the History of Book Curses), damned a book thief to a bloody death by torture, sickness and execution:

A book of [the Abbey of] SS Mary and Nicholas of Arnstein: If anyone steals it: may he die [the death], may he be roasted in a frying pan, may the falling sickness [i.e. epilepsy] and fever attack him, and may he be rotated [on the breaking wheel] and hanged. Amen. 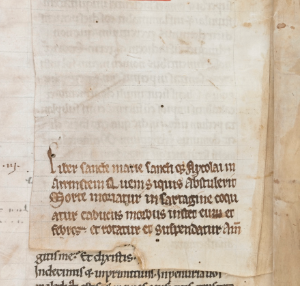 Other physical punishments were given explicit religious overtones, such as those that the Benedictine monastery of St Albans wished upon anyone who damaged one manuscript (Royal MS 8 G X) they loaned to monks studying at Gloucester College in Oxford: 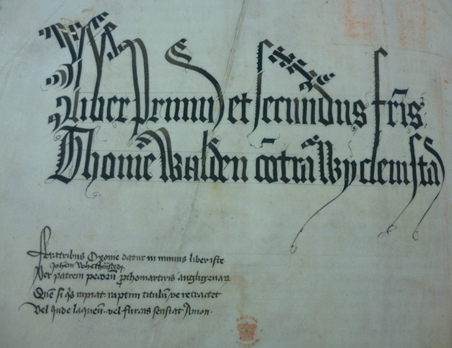 This book is given in use to the brothers of Oxford by John Wethamstede, father of the flock of the proto-martyr of the English [St Alban]; if anyone secretly tears this inscription or removes it, may he feel Judas’s noose [around his neck] or forks [presumably handled by demons!]. 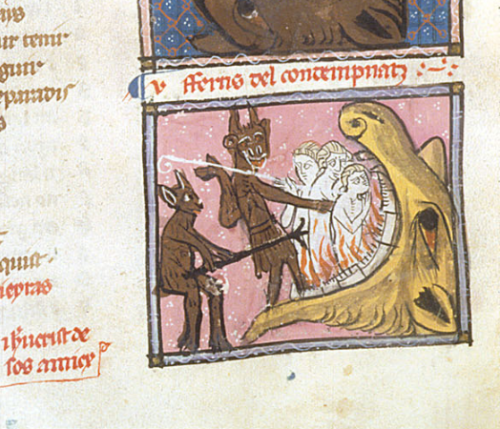 Devils wielding implements which may include a fork, from Breviari d'Amor, Southern France (Toulouse?), 1st quarter of the 14th century, Royal MS 19 C I, f. 185v

Gruesome as these punishments seem, to most medieval readers the worst curses were those that put the eternal fate of their souls at risk rather than their bodily health. A spiritual condemnation was often expressed with the Greek ‘Anathema’, sometimes followed by the Aramaic formula ‘Maranatha’ (‘Come, Lord!’). Both terms were used in a curse that was added to a manuscript with spiritual letters and sermons (Royal MS 8 F XVII) from Lesnes Abbey: 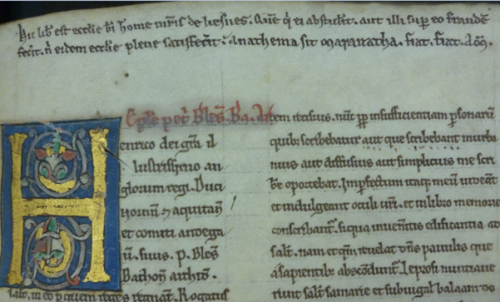 A book curse with the Anathema-Maranatha formula, from a collection of Latin sermons and letters, 13th century, Royal MS 8 F XVII, f. 1r

A monk from Rochester Abbey emphasised the severity of the ‘Anathema’ by claiming that his book’s thief would be condemned by the entire religious community at Rochester Cathedral:

Other scribes gave weight to their curses by attributing them directly to God-Christ. The aforementioned liturgical manuscript from the church of St Aldate, for example, contains another book curse, written in Middle English, purportedly originating from Christ himself:

This book belongs to the church of St Aldate

This book is one and Christ’s curse is another

Just like physical punishments, scribes could also specify the particular spiritual punishments they had in mind for their books’ thieves. One example comes from a manuscript from St Albans Abbey whereby the thief was excommunicated. The latter could have learned about what this entailed simply by consulting the stolen book, since the topic of excommunication was discussed in its contents, the Decretals of Pope Gregory IX.

This book belongs to the monastery of St Albans, anyone who steals it from the said monastery should know that he will incur the punishment of excommunication.

Another monk from Rochester specified that the thief’s name would be deleted from the ‘Book of Life’. According to biblical sources, this records the names of those to be saved at the Last Judgement; stealing the manuscript would be turned into a one-way ticket to hell:

This book of the Distinctiones belongs to the monastery of Rochester: anyone who takes it from there, hides or keeps it, or damages or erases this inscription, or makes or causes it to be deleted, may his name be deleted from the Book of Life.

A book curse for deleting a book thief’s name from the Book of Life, from the Distinctiones, 13th century, Royal MS 10 A XVI, f. 2r

The use of these book curses seemingly sits at odds with the monastic lifestyle. Medieval monks dedicated their lives to imitating Christ, including his virtues of patience, forgiveness and love for mankind. The fact that monks used these curses testifies to the immense material and spiritual value that they attributed to their libraries: their books had not only been extremely costly and labour-intensive to produce, but often they also contained the only copies of a particular work to which their communities had access. The loss of a book did not only mean a material loss, but it could have permanently deprived a religious community of a work of knowledge that was essential for preserving or developing its religious identity. This may explain why some religious communities went to great lengths to protect their books. Book curses were a radical but effective way of preserving their book collections.

Suggestion for a modern book curse.

If you don't return this book may you lose access to all your social media accounts, have your cell phone service cancelled and not have access to the wi-fi in the library.

"dieren eed" is "dear oath", an oath that will cost me dearly, if broken
______________
Thanks for your comment! We agree with your translation and have edited the post accordingly.

I wonder if "enen dieren eet" may not actually mean an animal oath, so much as s a "dear" oath, in the sense of costly, expensive, highly-prized, and perhaps dearly-felt. "Dier" as spelling of the Dutch word duur can still be found in a word like dierbaar, which also means dear or precious. .
________

I think the "furca" referred to in the Judas Iscariot curse was less likely to be the toasting forks of demons than the forked trees commonly used as gallows in the Middle Ages, and a fitting end for a thief. Black's Law Dictionary defines "furca" as "In old English law. A fork. A gallows or gibbet. Bract, fol. 56." I believe that Breugel's "Triumph of Death" features one prominently on the righthand side of the painting, in the midst of four executioner's wheels.

A thought occurred to me: could the 'Judas Noose' be a reference to the Judas Cradle, a real torture? Another translation for laqueum is 'snare' or 'trap'.

Any opinions about the book "Anathema!" by Marc Drogin? It was my first introduction to book curses. Thank you for this blog post, and all your work.