King Arthur: not just a man of the sword?

Warning: this blogpost contains spoilers for all versions of the King Arthur Legend, medieval and modern

A popular hero of our blog, King Arthur, is once again in the news with this week's UK release of Guy Ritchie’s new film, King Arthur, Legend of the Sword. In yet another variation on the legend, the young Arthur in the film is a gangster in the back streets of Londinium, who is unaware of his royal lineage until he draws the sword Excalibur from the stone. He fights to conquer his inner demons, avenge his parents’ murder by defeating the tyrant Vortigern and win back his rightful crown. This all sounds rather violent, and violence is certainly a key element in the Arthurian tales. But there is so much more to the various legends of our favourite hero-king. 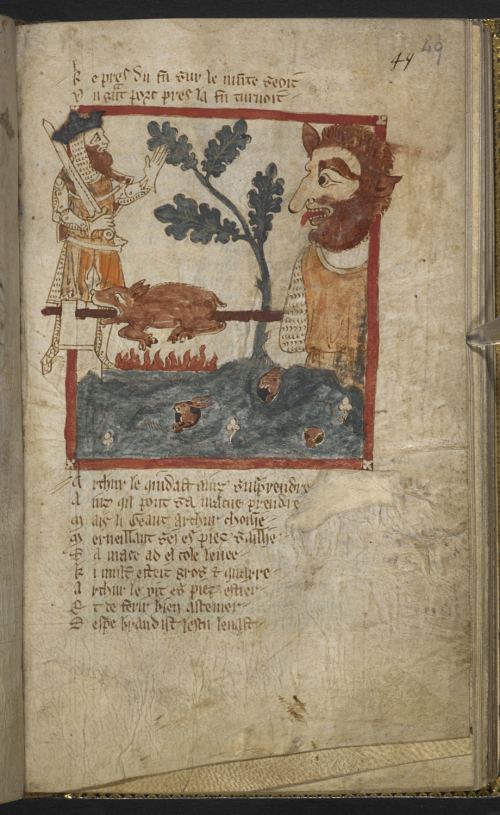 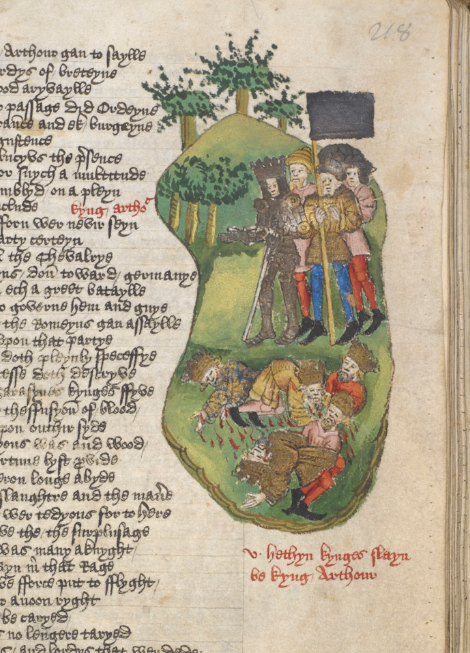 Sometimes Arthur and his followers fought to rescue a maiden. 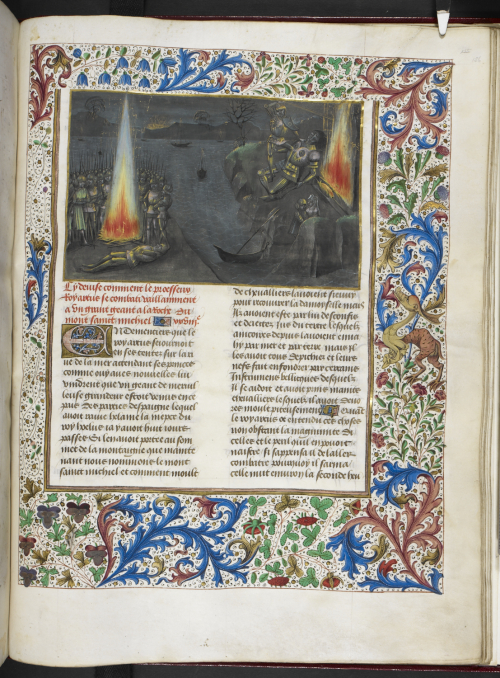 And sometimes they acted in self-defence. 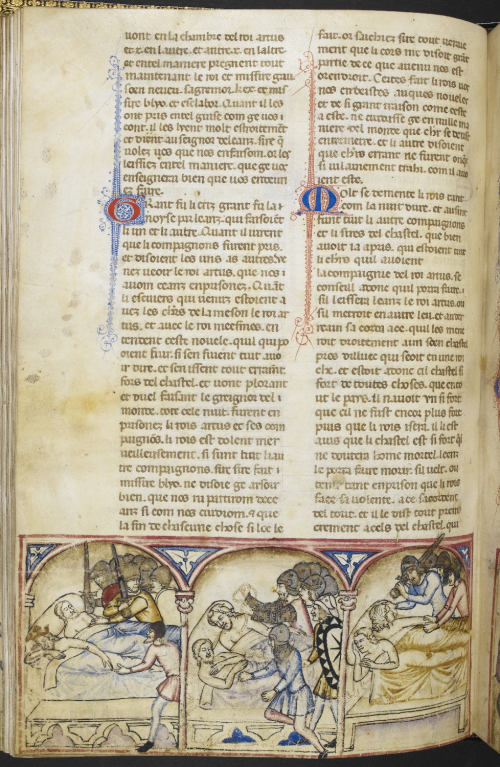 But often it seems he and his knights just enjoyed a good battle. 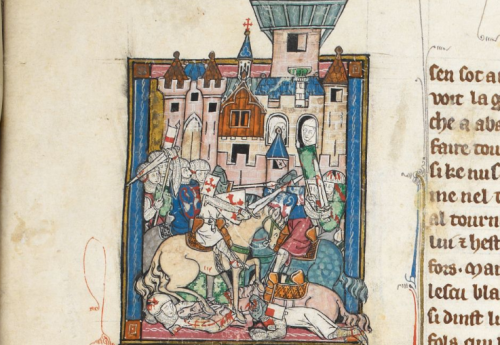 There are, however, differences between the modern film and common medieval stories about Arthur. Although the film focuses on Arthur’s youth, it does not include a character called 'Merlin', in contrast to medieval legends about Arthur's early life. 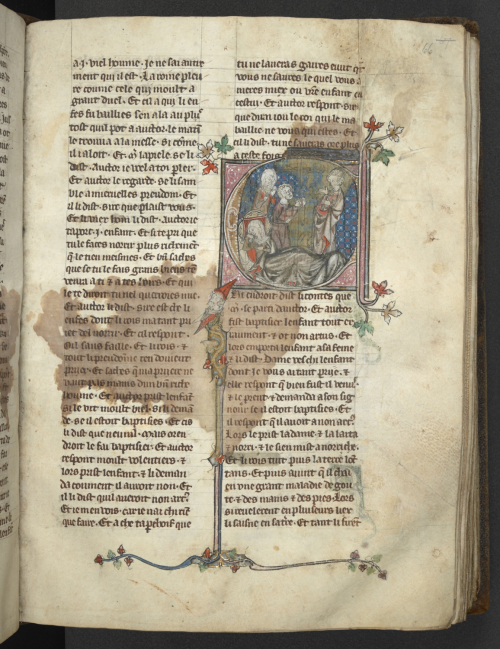 This version of the sword in the stone incident is a bit different, too. For a start, it does not feature David Beckham! 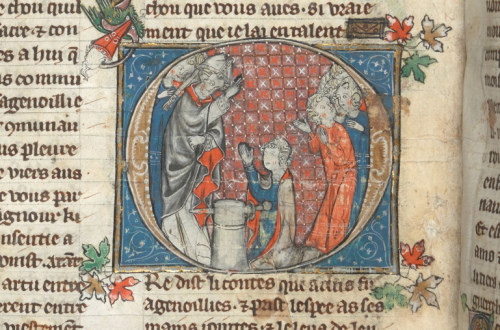 And in this version of the story, it is Merlin and two dragons who confront Vortigern, not Arthur. 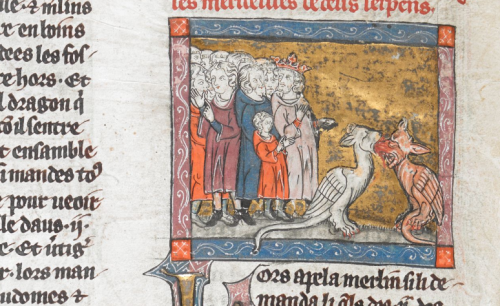 There are many more stories about Arthur, and not all the incidents emphasize violence. This manuscript of the Chronicles of England features an image of Arthur’s coronation. 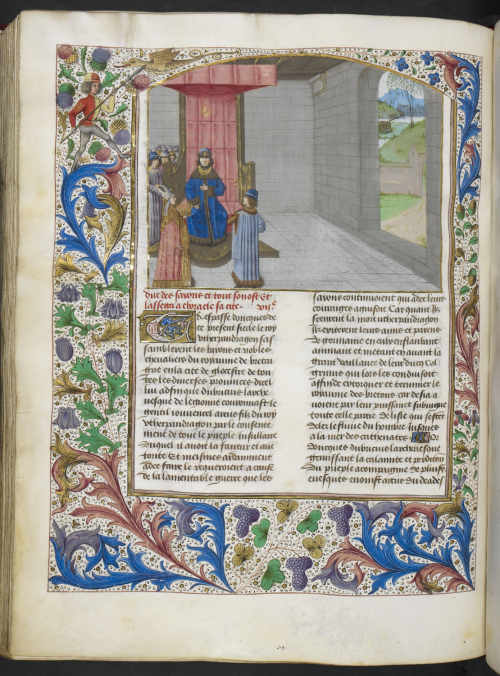 Once crowned, King Arthur is busy with many varied activities according to the legend, not all of them involving bloody battles. 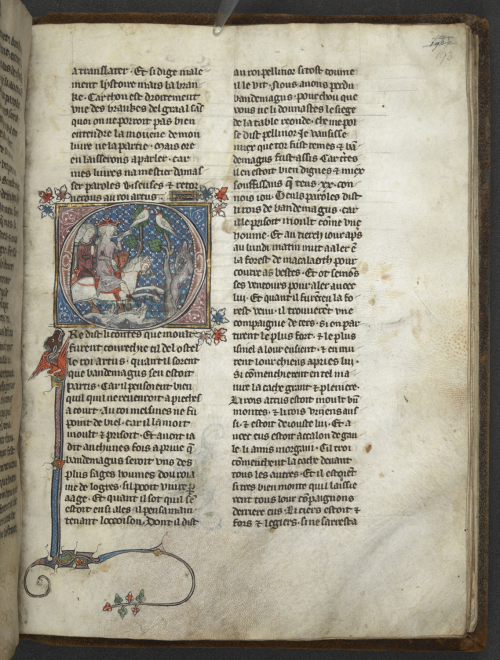 King Arthur blowing a horn while hunting with Urien and Accalon, from the Suite de Merlin, Add MS 38117, f. 193r He seems to end up in prison quite often, although there tends to be a damsel to look after him on these occasions. 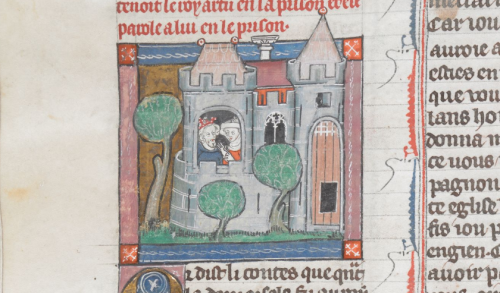 And he also enjoys many a great banquet with Lancelot, Guinevere and his courtiers. 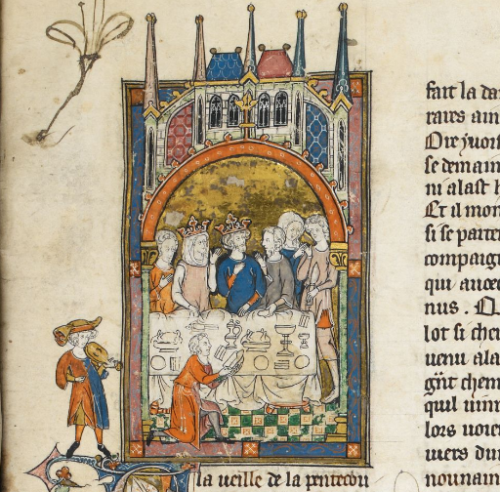 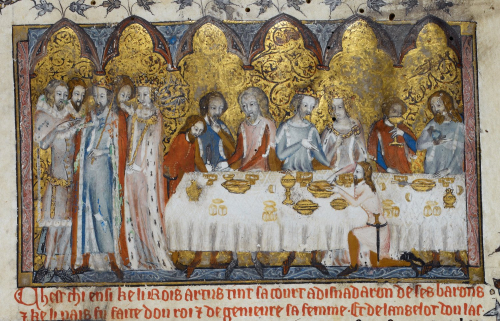 Arthur engaged in conversation with his barons, while Lancelot and Guinevere are whispering together, and on the right, the king and queen presiding over a banquet, from Lancelot du Lac, Southern England (Pleshey Castle), c. 1360–1380, Royal MS 20 D IV, f. 1r

Finally (SPOILER ALERT), in medieval versions there is no happy ending.  Arthur is killed at the Battle of Salisbury Plain and his noble vision of the Round Table is destroyed. 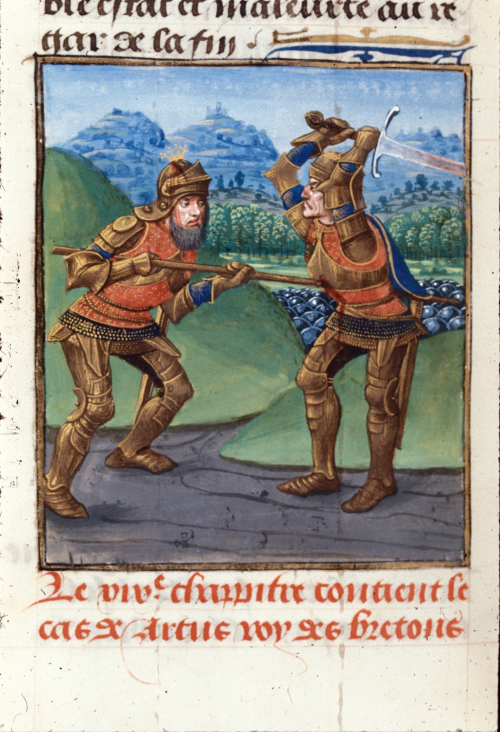 But the legend lives on …. on the British Library website. You can find a virtual exhibition of some of our Arthurian manuscripts here.

Of our large collection of Arthurian manuscripts, some are fully digitised online on Digitised Manuscripts:

Royal MS 20 A III: Prose Brut Chronicle and other texts

Add MS 25014: An excerpt from the prologue of the Prophecies of Merlin and other texts

Harley MS 3908: Prophecies of Merlin and other texts

And others are partially digitised in the Catalogue of Illuminated Manuscripts, with downloadable and searchable images, including:

Excalibur is not the sword in the stone.

"Although the film focuses on Arthur’s youth, it does not include a character called 'Merlin', in contrast to medieval legends about Arthur's early life."

While Merlin is not linked to Arthur's infancy in KALOTS he is mentioned a few times in the movie and shown while forging Excalibur.