Ready are you? More medieval 'Yodas'

A long time ago (well, a couple of years ago), in a galaxy not so far away, Damien Kempf of the University of Liverpool noticed an image of Yoda hiding in one of the British Library's medieval manuscripts. The green-skinned, big-eared figure with tufty hair bears a surprising resemblance to the character designed by Stuart Freeborn for Lucasfilm almost 700 years later. Kempf's 'Yoda' was one of several fantastical creatures reproduced in the book Medieval Monsters.

This is not the only ‘Yoda’ to be found in a medieval manuscript. Since the 'Yoda' discovered by Damien Kempf was featured on this blog, other people have told us about more ‘Yodas’ they have noticed among the British Library's manuscripts. These include a collection of romances and stories complied for a middling member of the Yorkshire gentry to a deluxe, multi-volume book of hours once owned by Emperor Charles V. We'd like to share some of these images with you here. Ready are you? 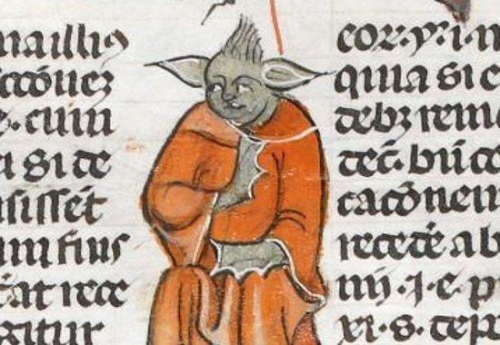 The first ‘Yoda’ we mentioned appears in the Smithfield Decretals, a 14th-century copy of canon law decrees compiled for Pope Gregory IX. The text of the decrees appears in the central part of each page, with a commentary written around the edges. ‘Yoda’ is perched above a series of decrees about ecclesiastical elections and the jurisdictions of people elected to particular offices. The Smithfield Decretals was copied in Toulouse (in southern France) around the year 1300, but some of the decoration, perhaps including the Yoda, was seemingly added in England around 1340. At the bottom of this page, a man and a woman gesture at someone peeking out from a building. This scene, along with similar illustrations on the neighbouring pages, may tell the story of the Biblical hero Samson. 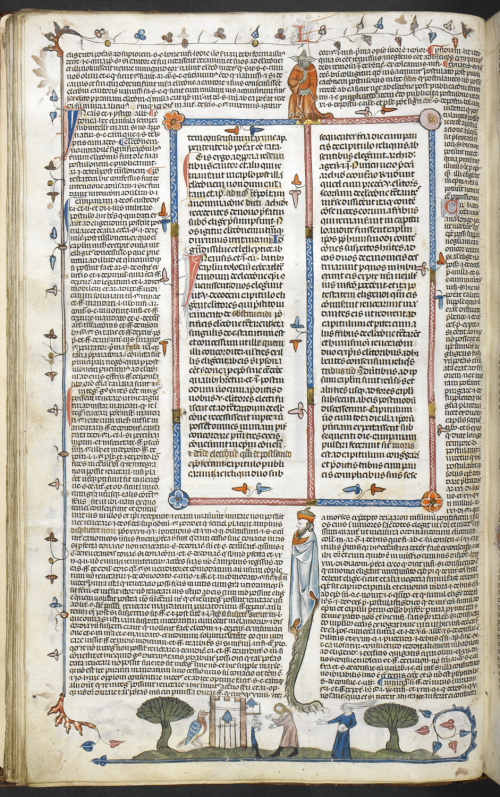 The decoration of such manuscripts was not necessarily related to their contents. Unnatural creatures often frolic in the margins of medieval manuscripts. These images, more commonly known as marginalia and sometimes called ‘grotesques’, are often strange, hybrid man-beast figures, or animals dressed and acting as people, usually in a playful or vulgar manner. Often there is no direct link to the text appearing above them. Apes dress as friars and priests, in a not-so subtle dig at the clergy, rabbits hunt dogs, and knights fight snails, turning the natural order of things on its head. Scholars have long debated the function and meaning of these images, and there is no single answer to what their original purpose may have been. However, their placement, especially when juxtaposed with serious religious texts, demonstrates the fluidity in medieval art — and medieval society — between the sacred and the profane. These ‘Yoda’ figures potentially serve a variety of functions: they are strange and amusing, but they might also have helped the medieval readers to remember a particular piece of text. 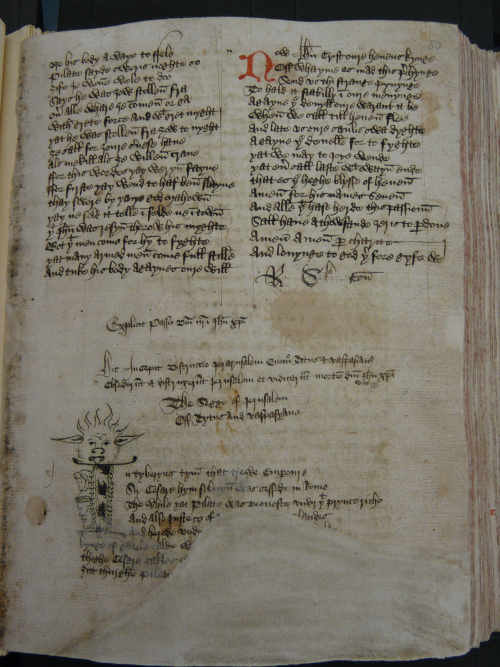 Last year, another ‘Yoda’-like figure was spotted by Karol Pasciano in the London Thornton Manuscript (British Library Add MS 31042, f. 50r). This manuscript contains religious poetry and romances compiled by Robert Thornton, lord of a manor in East Newton, Yorkshire. The initial with a ‘Yoda’ and two other, human heads appears at the start of the alliterative Middle English poem, ‘The Siege of Jerusalem’. 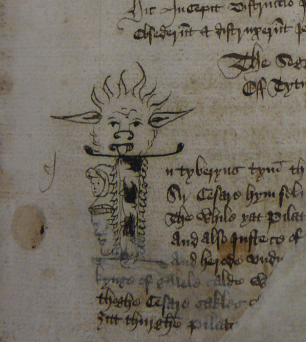 It was traditionally thought that Thornton was himself responsible for decorating this manuscript and one other (Lincoln, Cathedral Library, MS 91 (A.5.2)). However, Joel Fredell has recently suggested that the initials in Thornton's manuscripts could have been the work of several artists, possibly professionals based in York. Instructions elsewhere in Add MS 31042 suggest that Thornton appreciated creativity and imagination in the text and perhaps in their decoration: on f. 32v, he instructs that the text on the following page proceed ‘according to the scribe’s imagination’ (‘secundum Fantasiam scriptoris’). 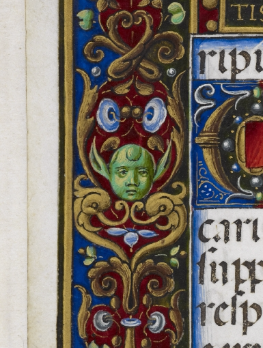 ‘Yodas’ are not solely found in the margins of manuscripts decorated in England. In contrast to Thornton’s uncoloured manuscript from Yorkshire, ‘Yodas’ can also be found  in lavish manuscripts produced during the Italian Renaissance. Another Twitter user has noticed two green heads with large ears in the margins of the Sforza Hours. This deluxe, multi-volume Book of Hours was originally made in the 1490s for Bona Sforza, duchess of Milan, by the Milanese court painter, Giovan Pietro Birago, and his assistants. Birago was Leonardo da Vinci’s better-paid contemporary; in Renaissance style he decorated the manuscript  with all'antica elements based on classical art. These elements included the paintings of gemstones, cameos, putti (like cherubs), and disembodied heads or masks in blue and green. The artists also depicted saints in lower margins. The page with the ‘Yodas’ also includes prayers relating to Anna the Prophetess. 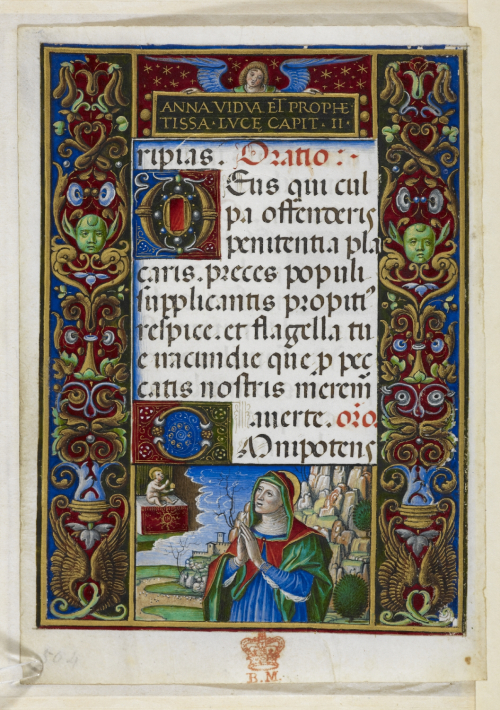 Some pages of this manuscript were subsequently stolen. A later owner commissioned replacements from the Low Countries in the early 16th century, but the ‘Yoda’ page seems to come from the earlier part of the manuscript. This gorgeous Book of Hours belonged to several major figures, including Margaret of Austria and her nephew Charles V, Holy Roman Emperor. One wonders what they thought about its decoration. 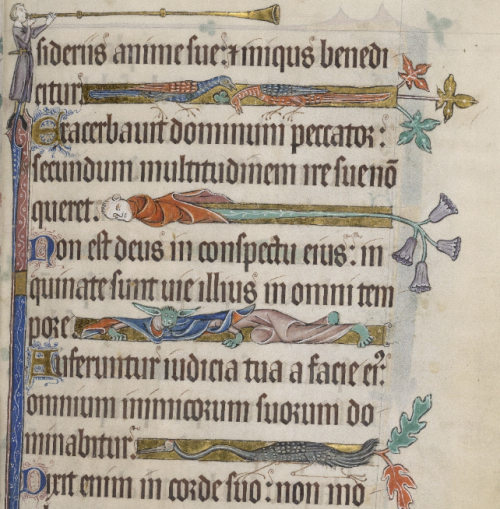 Recently, we have noticed yet another ‘Yoda’, marking the end of a line in the Luttrell Psalter. The Luttrell Psalter, made in the 14th century for Sir Geoffrey Luttrell, is a cornucopia of weird and wonderful marginalia, so it is perhaps no surprise that a ‘Yoda’ is amongst the hundreds of other creatures crowding around the text. Here, a ‘Yoda’ fills up the space at the end of a verse of Psalm 9: ‘God is not before [the sinner’s] eyes: his ways are filthy at all times.’ 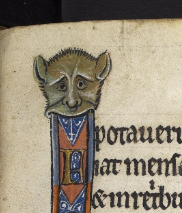 It is, of course, unfair to group medieval marginalia with reference to later works of science fiction. The artists who drew these large-eared, green-skinned creatures may have had a better understanding of what those features meant, if they symbolised anything at all. For example, the Rutland Psalter (shown above) features very similar-looking, big-eared heads in orange and green gnawing on borders. It is not clear that that artist intended the difference between these two creatures to signify anything beyond a varied colour scheme. In the same way, the Sforza Hours’ green ‘Yodas’ are joined by similar-looking, blue heads or masks on other pages, while a 15th-century Apocalypse picture book from Central Europe includes a whole host of big-eared creatures of various hues. 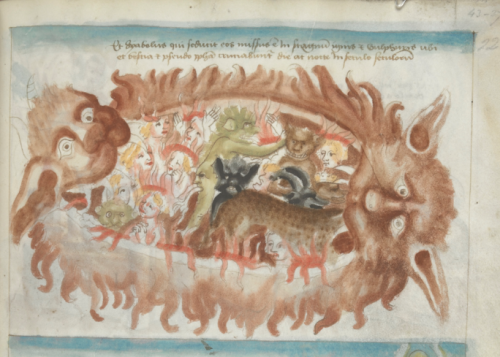 Large-eared creatures, some with green skin, in and around the lake of fire and brimstone, from an Apocalypse Picture Book with a preface by St Jerome, Germany, 3rd quarter of the 15th century, Add MS 19896, f. 22r

It is fun, nevertheless, to notice the similarities in the decoration of manuscripts containing different types of text and made in different contexts, from a local lord’s story collection in the far north of England to height of the Italian Renaissance. As Damien Kempf noted, 'Nothing, it seems, is ever new in principle.' ‘Modern’ imaginations and fantasies are not so dissimilar from those of a 15th-century Yorkshireman or a Milanese duchess.

We'd love you to tell us about other 'Yodas' you may have noticed. You can comment on this post below or via our Twitter feed @BLMedieval.