In an artistic league of its own

No matter how long you’ve worked with medieval manuscripts, there's always one that completely surprises you. One manuscript that has astonished many scholars, and still inspires debate, is the combination of music, texts and images in the mid-11th-century portion of Cotton MS Caligula A XIV, known as the Caligula Troper or Cotton Troper. The Caligula Troper has been described as ‘completely unexpected in a mid-eleventh-century English context’ (T.A. Heslop, ‘Manuscript illumination at Worcester, c. 1055–1065’, in The Cambridge Illuminations: The Conference Papers ed. by Stella Panayotova (London: Harvey Miller, 2007), p. 69). Not only is it illustrated, which is unusual for surviving early English musical manuscripts, but the style of its illustrations is unparalleled elsewhere. 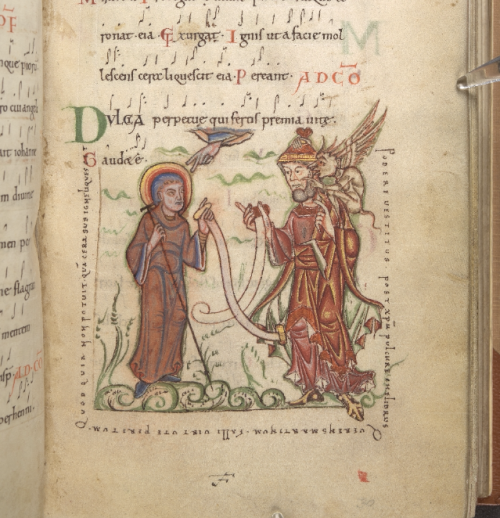 The Caligula Toper is so-called because it was housed in the section of Sir Robert Cotton's library named after the Roman emperor Caligula and it contains the text for tropes: that is, chants which would have been added to the mass on special days, like saints’ days or major holidays. The volume’s slim size — it fits in your palm — suggests it could have been used by a single person, such as a soloist. The text is accompanied by musical notation, called ‘neumes’. Although some neumes look like modern musical notes, they had a slightly different use and functioned more as an aide-mémoire for someone who already knew the tune. 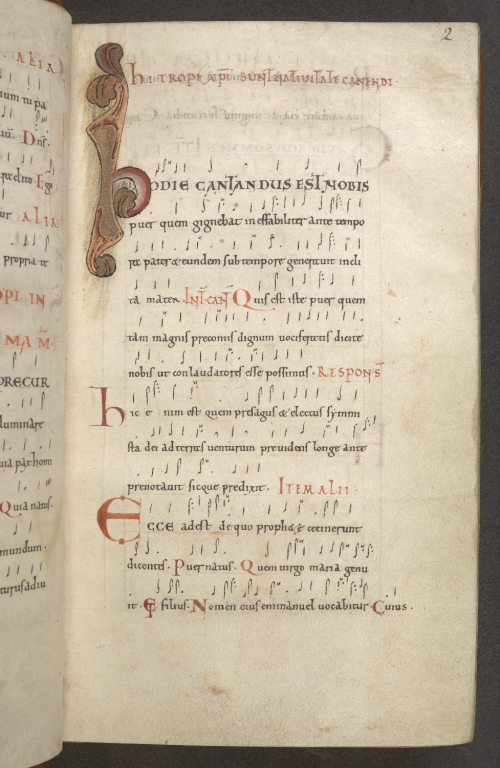 The Caligula Troper also contains illustrations of Biblical scenes and scenes from the lives of the saints mentioned in the text, ‘captioned’ by verses which run around the edges of the images. 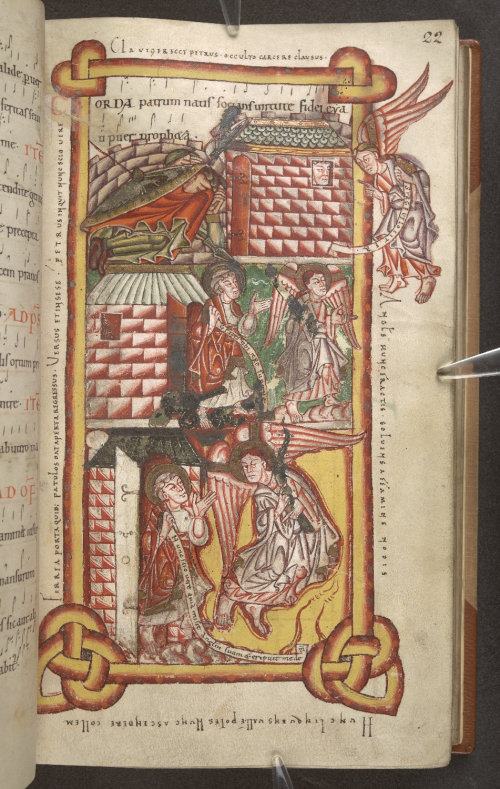 Miniature of Peter being released from prison, to accompany music from the feast of St Peter in Chains, Cotton MS Caligula A XIV, f. 22r

It is these illustrations that make the Caligula Troper so unusual. While the script and the musical notation seem to be English, the style of the illustrations is rather different from the artistic style which dominated de luxe English book productions during the late 10th and early 11th century. This style emphasized curved figures, round faces, and extremely fluttery drapery, as shown in the drawings below, which may have been made at about the same time as or shortly before the Troper. 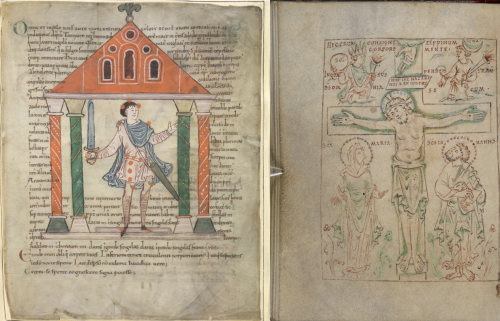 By contrast, the artist or artists of the Caligula Troper had a very geometric style, especially for the figures’ long faces, stylized hair-dos and triangular or diamond-shaped hemlines. The artist(s)’ use of bold colours, particularly red and yellow, is also striking, given that most surviving 11th-century English manuscripts favoured a range of colours or tinted line drawings. The artist(s) also used tonal modelling, or gradients of colour and shading, in a more decisive way than is found in other surviving English manuscripts. 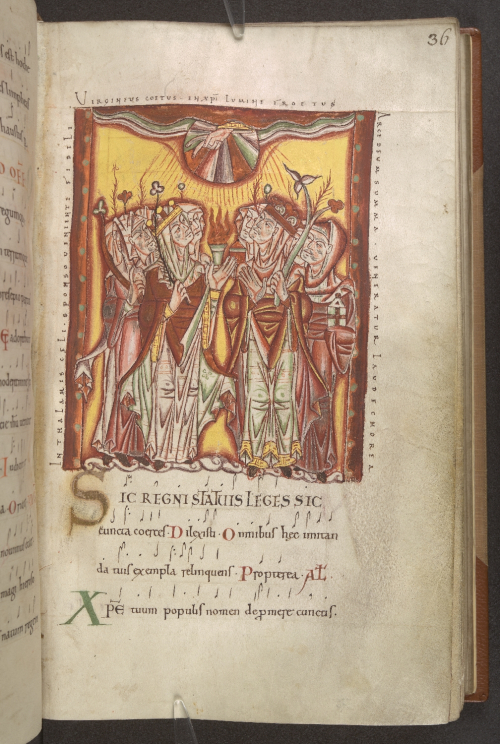 A group of virgins, from Cotton MS Caligula A XIV, f. 36r

This contrast can be seen particularly in images like the Ascension or the naming of John the Baptist. There, the artist(s) of the Caligula Troper copied the cast of characters and even the gestures found in late 10th- and 11th-century English manucripts, but with a totally different effect due to the more angular features on the figures and the sharper gradient of colours. 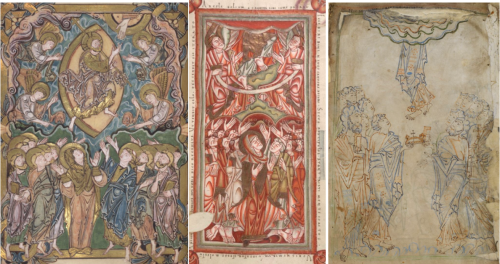 Because of this unusual artistic style, no one knows for sure where it was made. This manuscript has been associated with various religious houses, including Hereford, Gloucester, and the Old Minster, Winchester. Its date is also debated. Even if we could establish where the Caligula Troper was made, that still does not explain where the artist or artists were inspired to create such distinctive artwork. Some scholars have suggested that they spent time in mainland Europe or had access to continental manuscripts brought by travelling bishops. Others have suggest that the artist(s) were trained at Canterbury, and may even have known Eadwig [Eadui] Basan, the prolific scribe of several gilded service books.

Wherever and by whomever the Caligula Troper was made, Elizabeth Teviotdale has shown that it was used into the 13th-century, possibly at Worcester. Although the 11th-century portion that survives is missing some of its pages, it was added to a 12th-century Troper and Proser by the 13th-century, when the same hand annotated it. By the 12th-century, some musical notations and styles had changed — notably, notation now included lines to help indicate pitches — but the beautiful and unusual 11th-century troper continued to be valued and possibly even used for centuries to come. Thanks to its recent digitisation by The Polonsky Foundation England and France Project: Manuscripts from the British Library and the Bibliothèque nationale de France, 700–1200, hopefully this distinctive manuscript can continue to intrigue and surprise viewers for many, many years to come.

Brilliant. Thank you for posting!